to Kerrville all intact, in spite of the steady West Texas winds. They roared through the night and started to buffet us almost as soon as we left Ft. Stockton. It is a nice drive in and the scenery is a little more interesting than to the west of Ft. Stockton. There seems to be a lot of windmill blades moving both ways on the highway, we met a half dozen or so heading west and two pulled out in front of us heading east. Let me tell you these things must be a handful to haul; they are 60 or 80 feet long and are really just a wing that bolts onto a tower and turbine. We were going to pass the two we caught but as we pulled up close it became apparent that they create a weird kind of turbulence. What with the wind and the way those wings were swirling it the bus started ducking and diving like it was just starting break dancing lessons. All that safety training the boys back at Shell forced into me came into effect and I decided that maybe they were actually traveling fast enough for me to stay behind. This box wasn’t meant for flying so we chose the safe route, following them and watching the smaller cars get buffeted as they passed them.

We arrived a day ahead of schedule so for tonight we have been put in an “executive site” and will move over to the regular spot tomorrow. It is pretty large and comes with furniture and a view of a pond. Interestingly enough the pond has an Ogopogo like creature in it. I guess that is why they can never find him with the sonar in the Okanogan Lake he is gone to his winter home in Texas. 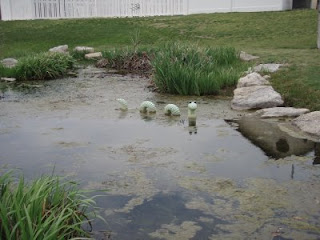 After getting set up and cleaning the traveling dust off the rig we headed out to visit our way around the campground. We met a lot of the Dreamer folk and just so I don’t miss somebody in the list I am going to leave it at they were all pretty delightful to talk with and it sounds as if they have had a great time so far this week and the week upcoming sounds like it will be a riot also. Brenda put together one of her lasagne’s for the potluck supper we are having tonight and we will meet the whole gang there.
Posted by JB at 6:37 PM