Walking and Shopping and Anniversaries

Today we again walked with Joe and Sheri. Spending time with good friends makes the time go fast and the exercise easy. And by the time we are done we may have actually only covered a short distance but the stories will make it almost marathon length by the time they are all told.

After our morning stroll we decided we like everyone else here needed a trip to Fredericksburg. It is only 20 odd miles north of Kerrville and is an interesting town with a lot of shops that specialize in taking away all your disposable cash. They did a good job on us, we now have 12 different kinds of chip dip and a couple of different jams or spreads as well as a new rug just like the ones our friends here have bought to put in front of their rigs doors. That not being enough we had to stop at Walmart and pick up a few things for tomorrow's Breakfast at Dinner Pajama Party. If we are cooking eggs we thought maybe it would only be right for the Canadians to bring along a little of what they call Canadian Bacon down here. Now back home we just call it back bacon as I am sure that American pigs supply it also. That and some Champagne as I don't think you can have breakfast without Mimosa's can you. Brenda also bought some other stuff but we left it on those goofy roundabout bag holders that Walmart has so the Walton family won't have to worry about starvation for another day or two.

After we got home it was really just a laying around messing with the computer type of day as it is pretty cool here. Now don't get excited we are not looking for snow tires or long underwear but I did have to put long pants on for our early morning walk.

We have met so many great folks here this week and heard so many great stories. The one that sticks in my mind the most is the one Rollie and Gina told about their adventures with ticks. Little known to rest of us it was also Rollie and Gina's anniversary and they came with us to Mr. Gatti's All You Can Eat Pizzarie for dinner. Thanks guys for spending your 27th with us rather than staying home and enjoying that filet and wine and probably a little tick hunting. 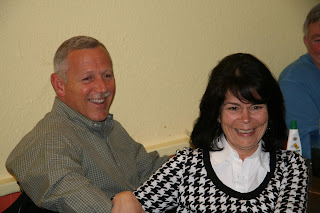 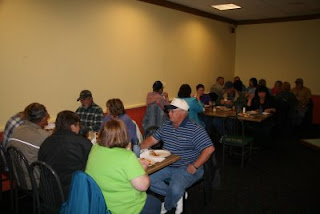 Pretty near the whole crowd as I think Rod and Loyce joined us later after I had already taken the picture. 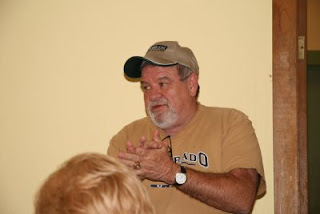 And here is that same old Mexican guy who was Master of Ceremonies at Brenda's Birthday now he is doing Rollie and Gina's Anniversary dinner. Pretty busy cat.

We had another enjoyable dinner together this time all a credit to the company as the food was pretty bare bones. After dinner we all headed back to Buckhorn and gathered in the Social Room for a little chin wag. 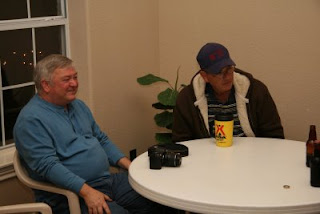 Mark and Don trying to figure out what the others are up too. 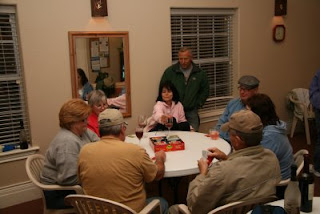 Some kind of high stakes card game in progress. 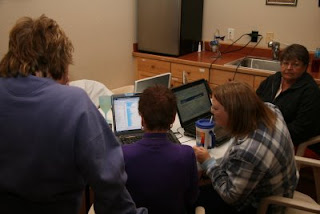 And I guess it is not surprising that the infernal machines that have brought us all together are in attendance at our evening visiting sessions.
Some of the folks were playing games, others playing with their computers and maybe even chatting with those who couldn't be with us, while the rest of us just told stories and compared notes on subjects of all kinds. To date at this Gathering we have resolved the Auto Crisis, the Banking Crisis, School Issues, Oil Prices, the RV industry issues as well as a few other less critical problems. I can't imagine it will be much longer until both Barack Obama and Canada's Prime Minister Stephen Harper come calling to have us advise them of the way forward.
Posted by JB at 3:51 PM