May Long (with an added map of our rides)

Wow, looks like another month has gone by without me getting busy updating the one follower I have left on the blog here. We have been doing all our regular stuff but I have written about that so many times that I think I should just refer you back to previous entries.

Brenda's knee is coming along well, she thinks a little slowly, but the doc says all in good time. Her last appointment she was given the go-ahead to drive and in another week or so she will be good to get on Wink for a short ride.

The girls made it out here for Mother's Day 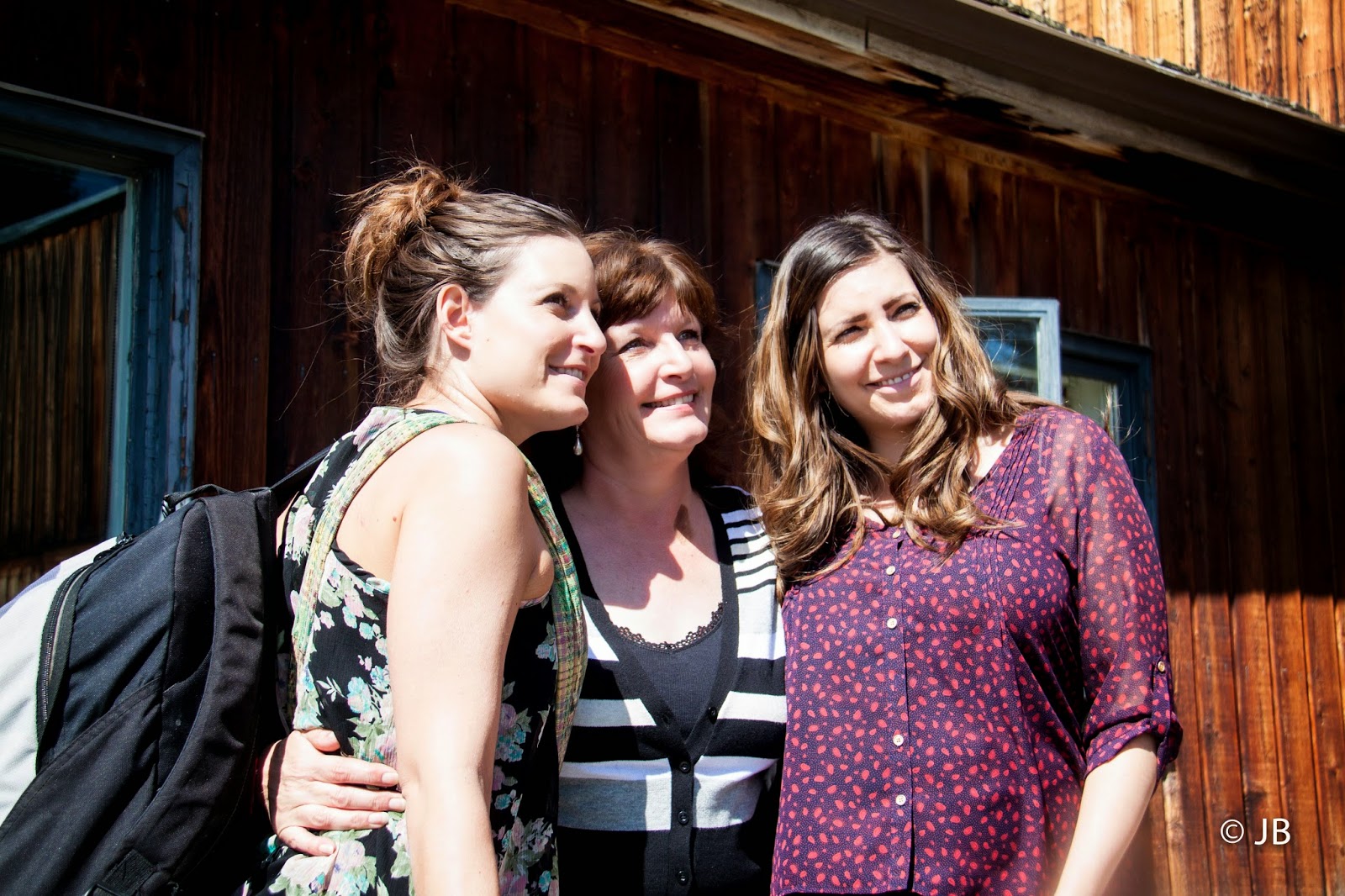 and as usual Brenda was busy in the kitchen preparing for that. She just needs to feed people, as anyone who knows me can see, so I was in charge of most the playing with the grandkids. They sure love it here at the farm where they can run till their hearts content and there are a whole pack of dogs to play with. 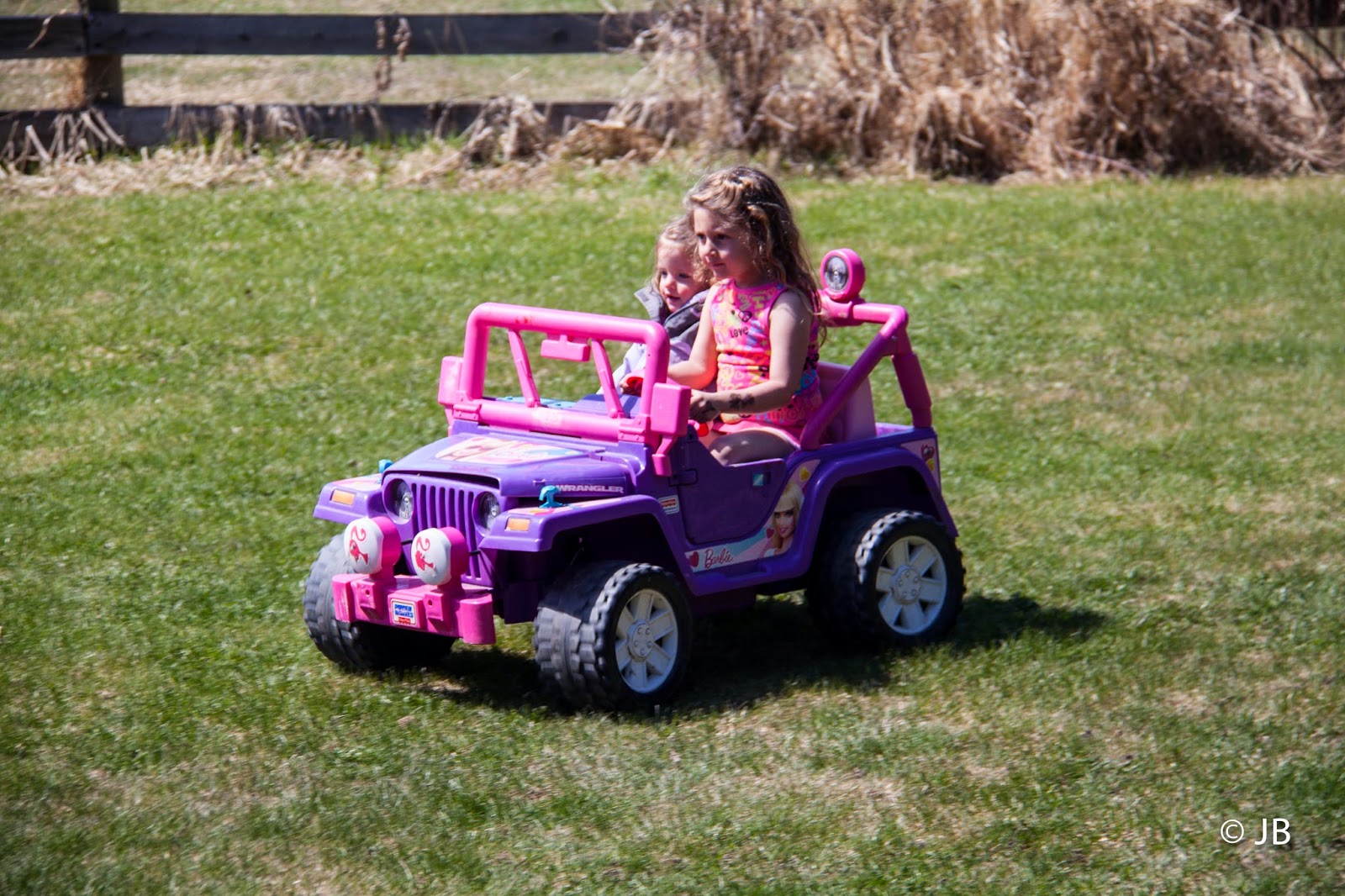 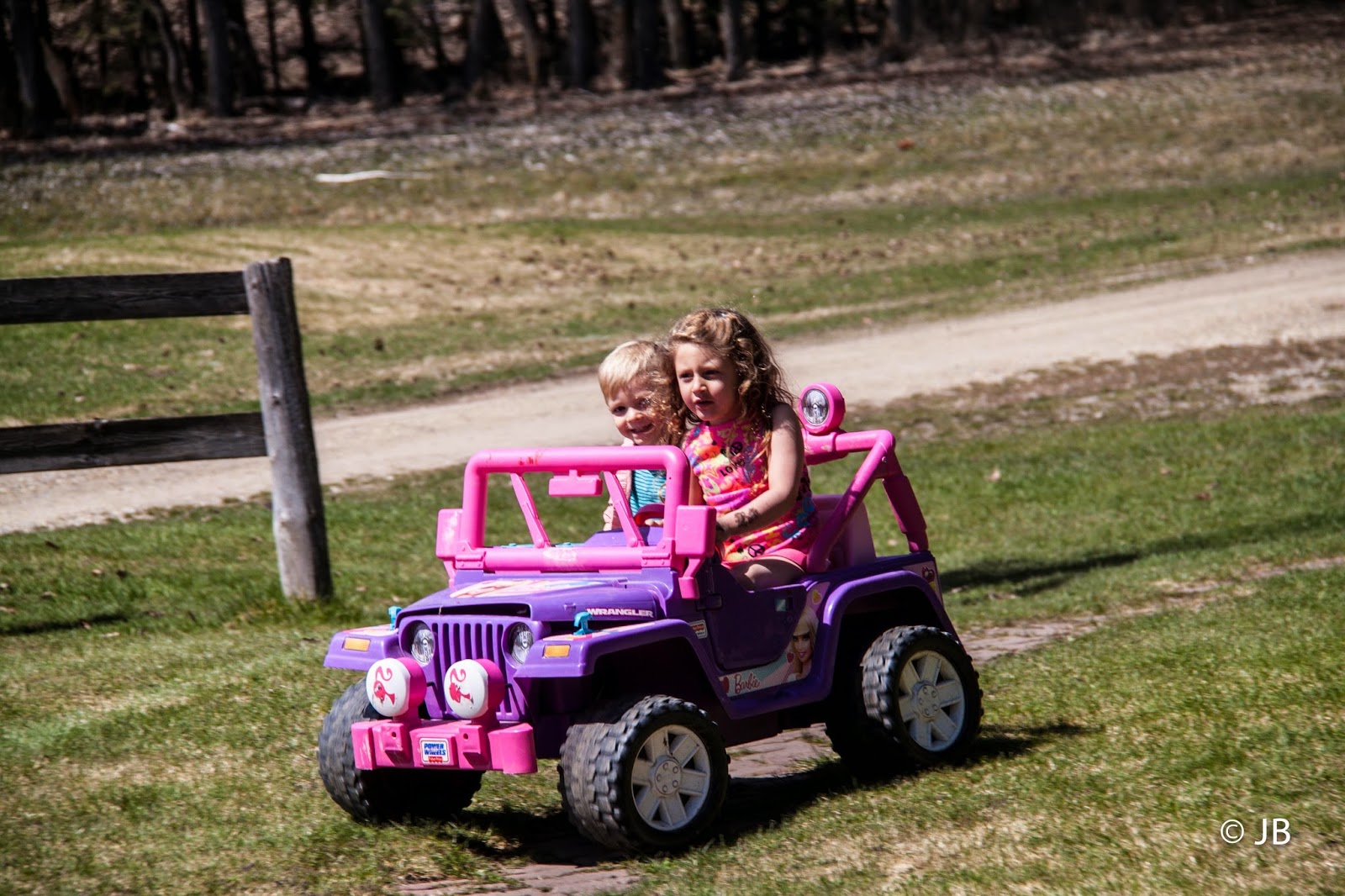 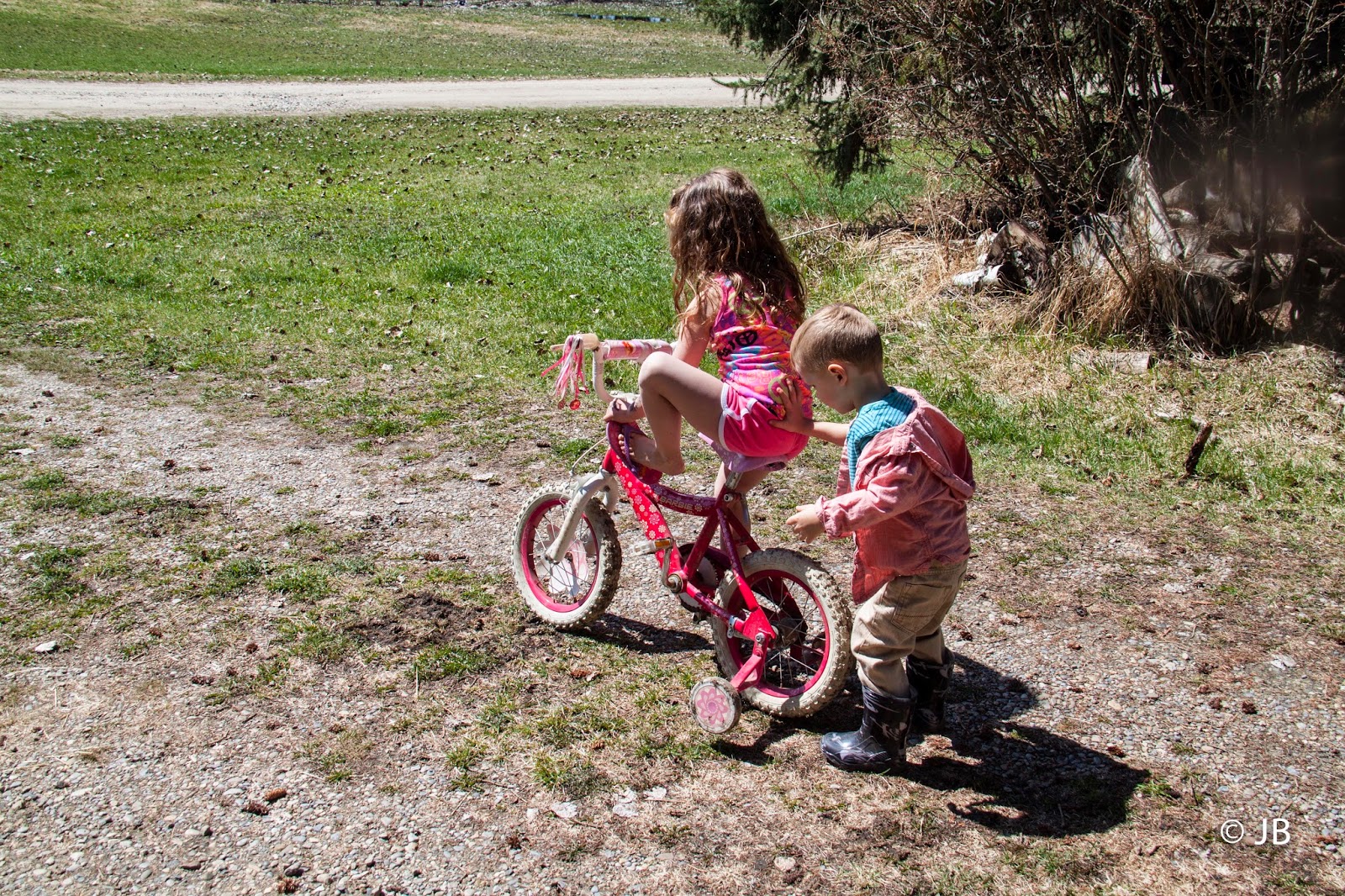 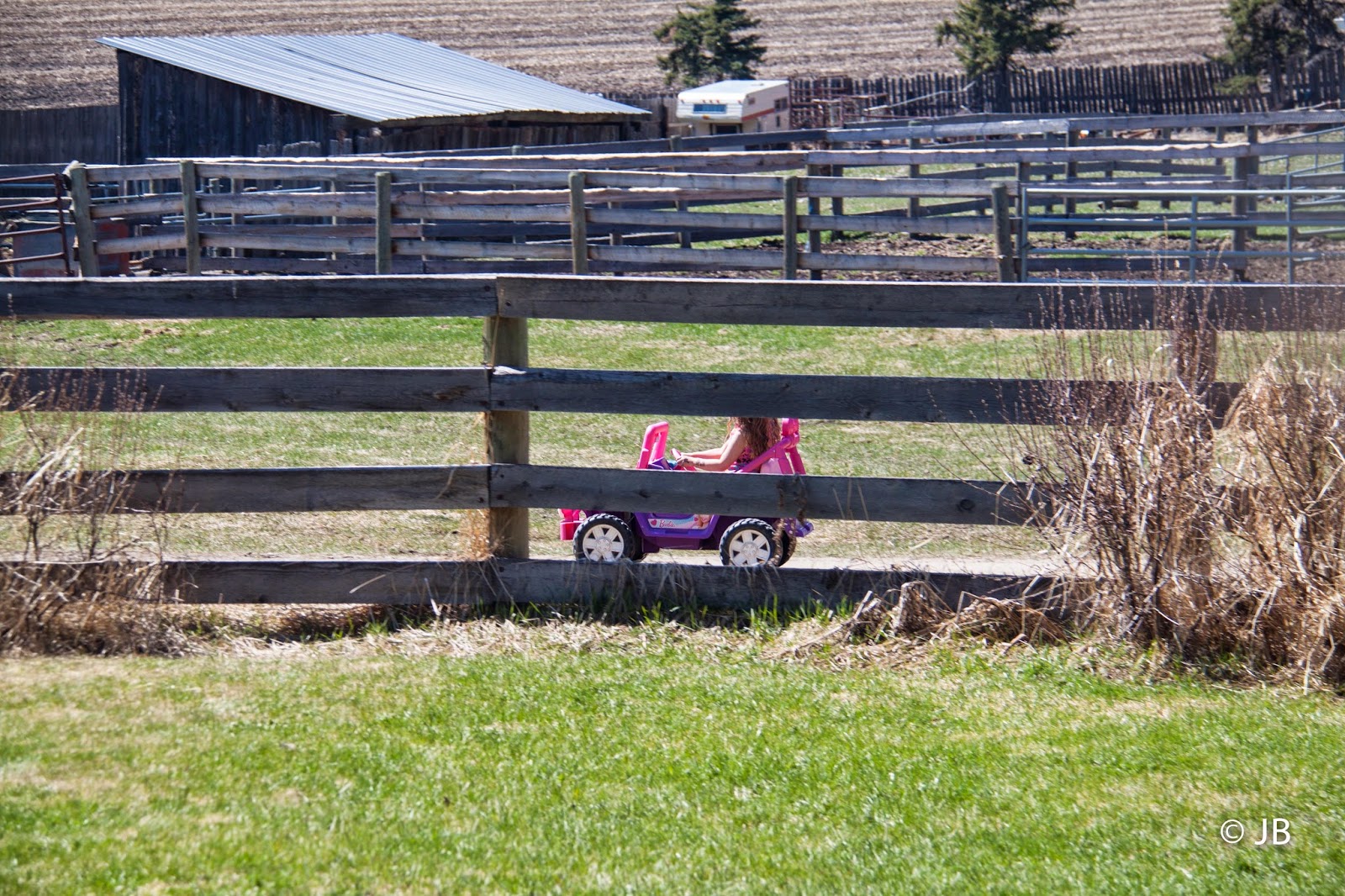 After riding the Jeep Car and running around we got them all to stand still for a family photo, from the left Lacey, Clayton, Brenda, Bec, Alle, and me. Down in front Ella and Kash and on the camera, Clayton's Mom Becky. Oh yah and can't forget Everly, hiding under Bec's shirt. 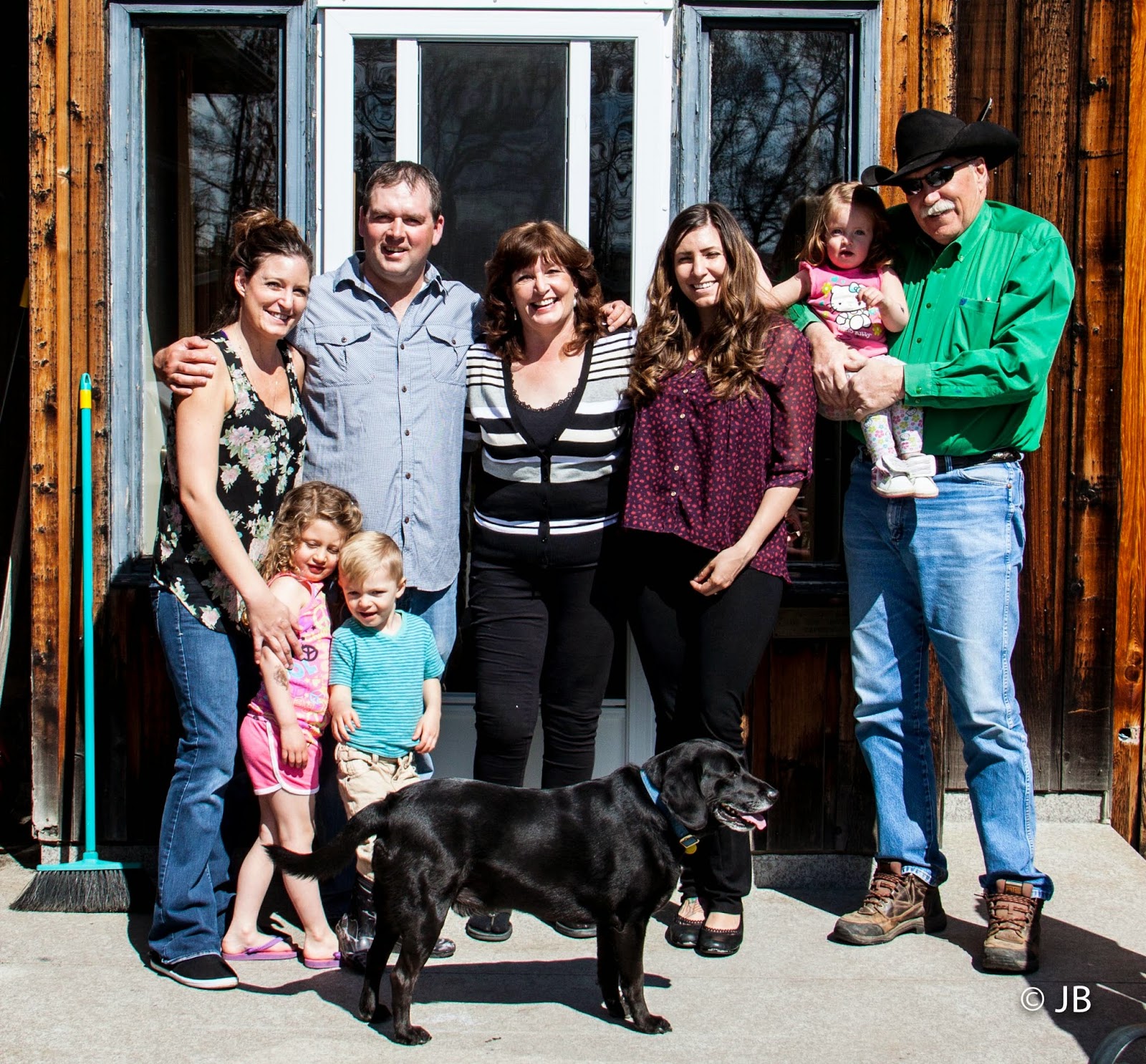 It has a been a little different spring here, we get nice days spaced out between replays of winter but the May Long weekend is usually when we get out on the trails for the first time here in Canada. Our horses have had a pretty lazy spring. We pulled the shoes off back around the first of March and I headed off last week to get Blue shod so we could head out to the West Country this weekend. But first I needed to run out and see how the roads had fared over the winter. Along the way I ran into a couple of bands of wild horses. It seems that depending on where they range they have had different winters.

The road scouting trip went well so we pried the rig out of the shed here at home and headed west on Thursday. We were headed to the Eagle Creek camp just on the boundary of the Yaha Tinda Ranch. There is a spot there that will take a number of rigs without any crowding and the Pohls, Lewis's, Vic Almond, and Daniella, Trevor, Mel and Serena were going to join us so that looked like a good spot to set up camp.

Friday we saddled up and headed out onto the Poplar Ridge trail, that Brenda and I just call the high trail, and as you can see from the photos above it has some pretty spectacular vista's along the way. We took a small detour up towards Eagle Lake to see how it was coming along. Might be awhile before there is much swimming there but there were reports a large grizzly was seen up there in the last few days and one of our group did spot a large black bear track along the trail. We weren't so lucky but the fact that the bears are out and about is a pretty good indicator that warmer weather is on the way. After the ride we enjoyed a great time visiting around the campfire and watching the sunset over the Rockies. 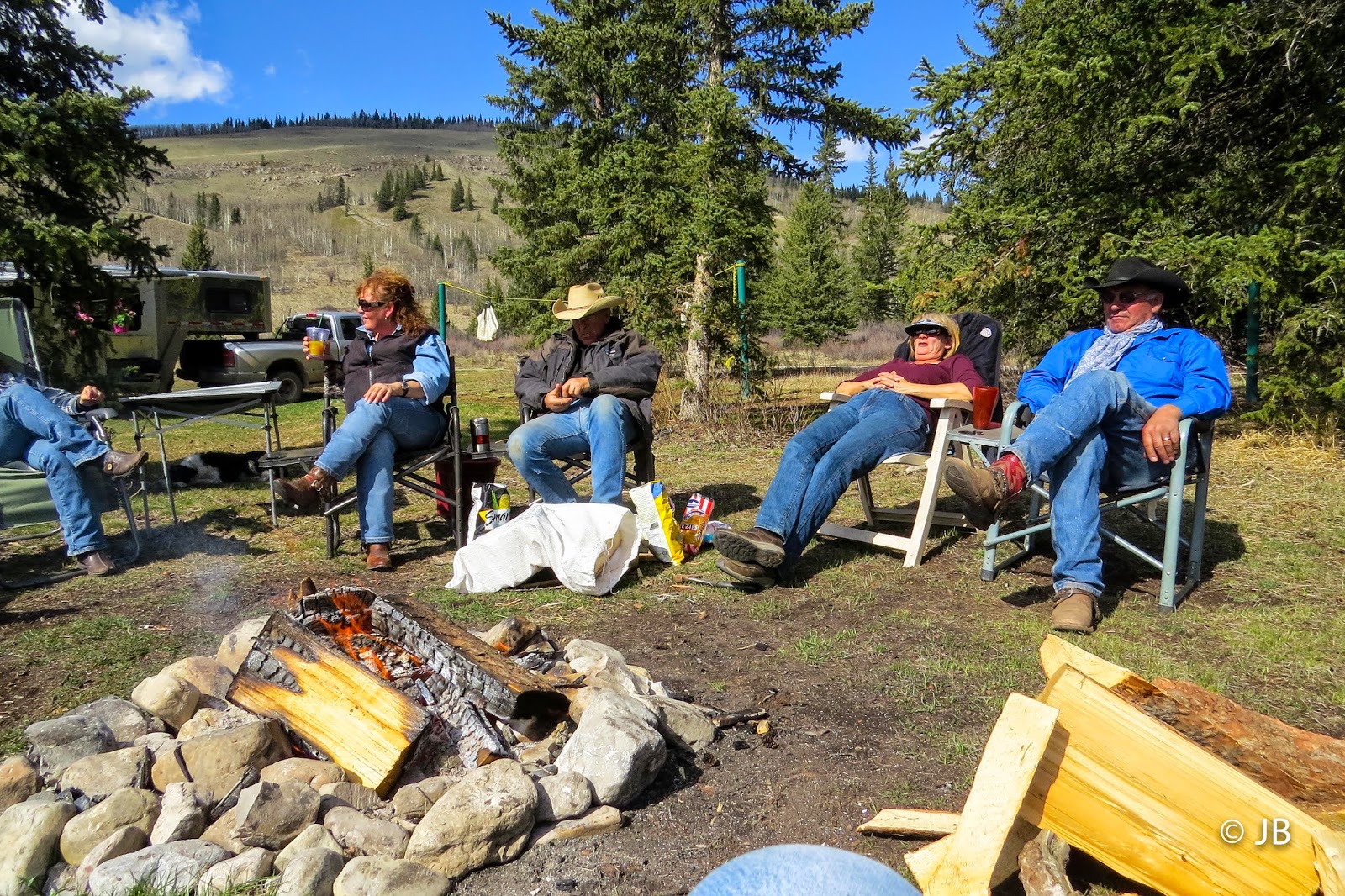 Day two we headed out a different way and crossed through the Bighorn campsite on the way. Lo and behold, in that site we ran into our old friend, Dave Schmidt and his daughter Heidi and her husband Darcy. Dave's wife Sherri has apparently had a mishap back at home and had to miss out on this trip. Damn the luck. After leaving the Schmidt crew behind we headed up towards the cut blocks on the west side of Bighorn Creek. Once we got across the meadows we took a trail to the right that lead us down to a great little lunch spot overlooking the Bighorn creek valley. 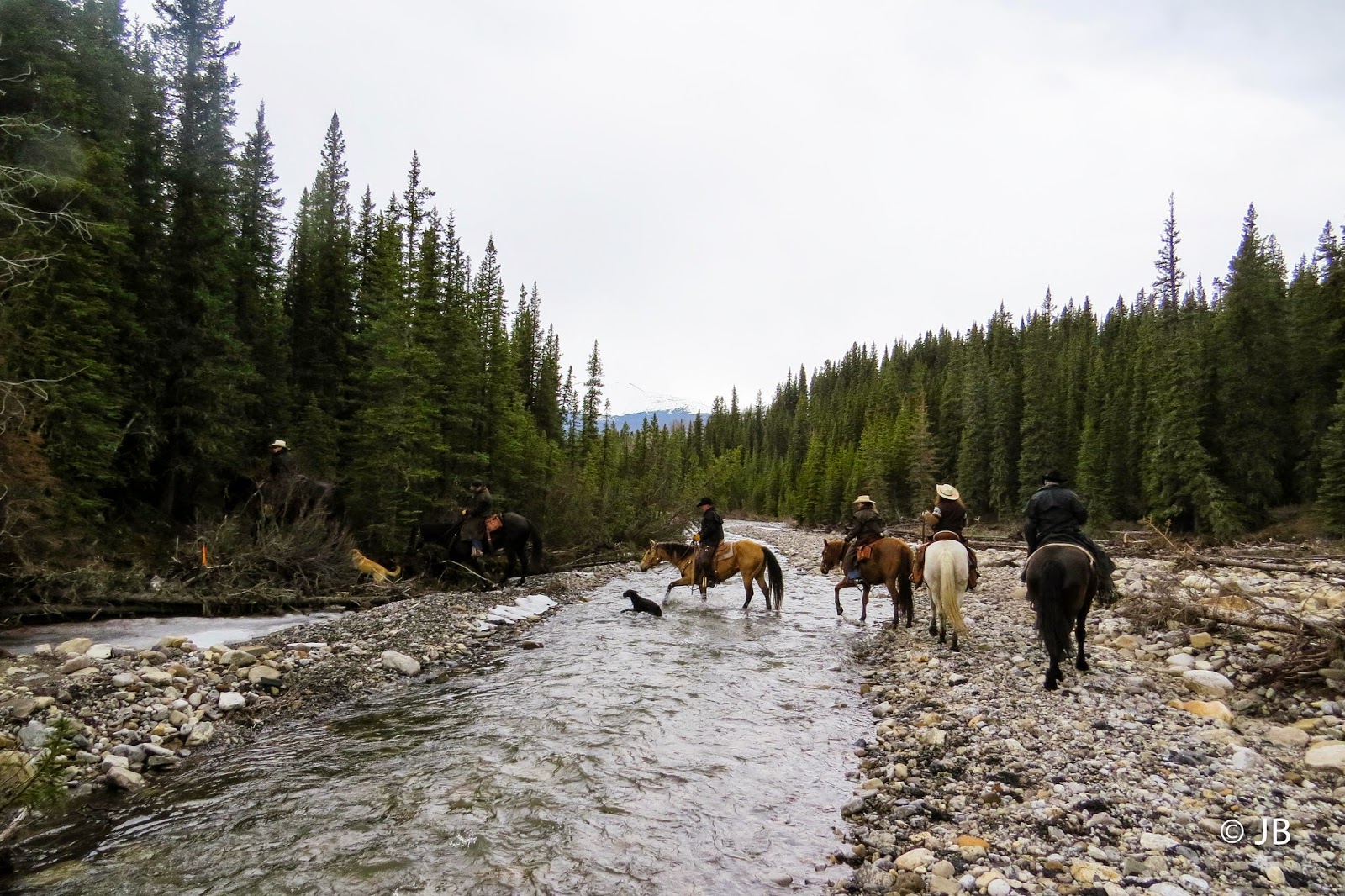 We had a great time and although Day two we had a little rain and we got to try out our slickers on the ride back to camp it was not a real soaker. That was to come later. Once we were settled back in camp the rain settled in and came down pretty steady throughout the night.

Sunday morning we got up and the rain was still coming so we figured we would run for the flatlands. It took us a while to get everyone ready to roll and as the road was pretty muddy by this time it was better to travel in a group just in case someone had some trouble. Once we got out of the camp it was clear sailing though and other than a big rock slide along the Coal Camp road there was really no problems getting out.

There are a few folks who like to see where we have been in a more traditional form so here is a map of some of our rides in this area.