This past weekend we headed out with Kashton and Everly, and of course their parents for a little lakeside lingering along Koocanusa Lake in South Eastern British Columbia. BC has been off our radar for while, hard to get motivated for a trip over there when they do so much to get in the way of Alberta's economy but we figured we wouldn't need to blow the budget there, we could gas up in Alberta and make it back with that tankful. We did spend a few bucks on breakfast at Mickey D's in Cranbrook but they support Canadian farmers so that was money well spent.

The kids had found a little boondocking spot I am now calling Bovine Beach as every morning the local grazers invaded our site to enjoy a little BBQ and muck around with the recycling, so that kept me busy every day convincing them to vacate the campsite.

The beach was beautiful though, great sand for the kids and a slow drop off with very little current so a great place for the grandkids and their buddies to build sand castles and muck about in the water, I even got in a couple of swims, though not very long, while we were there.

It has been a long time since I fired up Blogger and updated folks on what we are up to. Last time I had just arrived back from the land of the sun in early February. That was a mistake as it was a long time until the furnace quit running up here in the Land just North of Summer. But Brenda was needing a little nursing and the best she could come up with was me. I ain't much good at it, but I do work cheap.

After hiding out from OLD Man Winter for the month of February I started back at the pool doing a little swimming most week days and that seemed to make winter pass a little quicker. Sometime in late March I took the trailer into Woody's in Red Deer to get a few minor things looked at and to get their opinion on what I thought were some pretty flat springs under her. They agreed and Grand Design agreed to replace them with similar 3500# springs, Well it seemed to me that putting the same springs on would just mean the same result so I gave the folks at Grand Design a call and with a little cajoling they agreed to upgrade them to the 4000# models. That may solve the issue, sure can't hurt anyway.

April and May were spent getting all caught up on my Doctor and Dentist appointments, appears that I am good for a while more, at least until I'm not I guess.

Towards the end of May, Brenda and I headed into the city to watch our grandson Luke walk across the stage and graduate from High School. I have no idea how that happened, seems like yesterday he was just starting pre-school. There is a story behind those Red Boots, they are made right in Calgary by an outfit called Alberta Boots and you can almost guarantee that if you have a pair you are a member of the World Champion Calgary Stampede Showband. Luke is all of that and comes by it pretty honestly as both his father and his mother were members of that same group when they were his age.

Sometime this spring we got an overnight visit from the Anderson clan, always good to get to spend a little time with them. 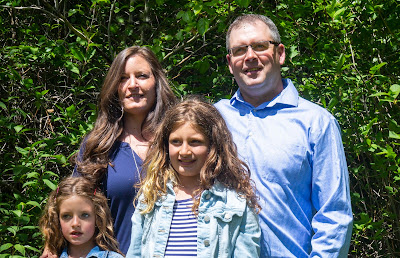 Of course July wouldn't be complete without a visit or two to the Greatest Outdoor Show on Earth, the Calgary Stampede, and if your grandchildren are performing there it is even better. Annika is a part, the most important part in my opinion, of the band front for the Calgary Stetsons Show Band a High School aged band. 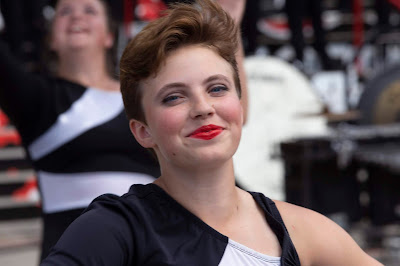 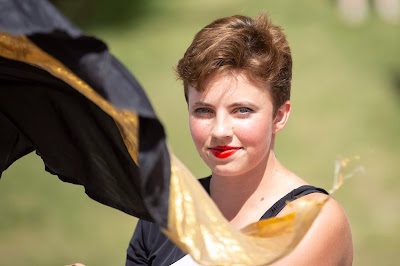 I think having Grandpa poking his camera in her face was a little disconcerting but I did get a smile or two, but I missed the money shot, when she stuck her tongue out at me.

I already mentioned that Luke was a part of the Stampede Showband and I don't actually think my paparazzi like stalking bothered him as much, he seemed to be having a blast. He plays the contra, a low, low brass instrument, but if you are part of the band you are part of the show so it is not all about music. This year Calgary was the host city for the World Association of Marching Showbands World Championships and our own Showband stole the show and won it all, their sixth time as Champions, and the Stetson's, Annika's Band, came in a very respectable third.

We were going to try to escape Dogpound North and head to the Buffalo Creek Ranch up Wainwright way and gather some Saskatoons for jam and pies but we had a little truck problem so had to write that trip off, cousin Mike did come down from there and spend a night with us while he visited an old friend in the city though.

Now we are getting a little bit caught up, last weekend we were into Chestermere to visit with our Tomasir grandkids, and oh yah, their parents as well. Always great to spend time with them and get a chance to visit on a beautiful summer day in their beautiful yard.

I have not really burnt up the digits on my camera's this year but we have had a few nice skyscapes over the past few months, well more than a few but here are two I captured, three, if I include the first shot in this epistle.