Not a lot of exciting stuff happening here at Dogpound North. We have had a taste of winter and some Indian summer but history tells me that there will be more of the former than the later in the future. I see from the blogs that there are a lot of folks packing and checking their lists making sure they are ready to run for the sun. We are no different here at DPN. Our trip south is a little different as a lot of the stuff is already waiting down at DPS so it is just a matter of packing up the fridge, Brenda's baking things and some clothes and we are ready to run. Over the next week or so we both have a visit with our docs, a date with the boys at Fountain Tire to make sure the truck we are leaving behind is well shod just in case this winter and then it will be time for me and the pups to head south. As has become our habit of late, I will drive down, and Brenda will fly at a later date. That date will be a little later than usual as she has a trip to Toronto planned to attend a conference on rare diseases like her Complex Regional Pain Syndrome that will keep her busy till mid November.

Last week I had our LQ into my local fabrication shop in Sundre to get a few things changed around a little. While they were doing that work I took a spin out past Bearberry and then up to Burnstick Lake for a look see. It was a kind of gray day, but even those days have their moments.

I stopped by a friends place on the way home, but Ivan and Hailey were off wandering around British Columbia on their pre-migration expedition. They have since been back home and it wouldn't surprise me if they have already unloaded the camper and hooked up to the 5th wheel to follow the sun. Hope we get a chance to catch up down south.

Last week I mentioned we are not taking our horses south, but Arizona is a beautiful spot and to really appreciate it you have to get off the blacktop. Towards that end we have acquired a new mount, I have annoyed everyone I know with one of these asking all the dumb questions I could, bothered a bunch of sales folks, climbing in and out making sure a guy of my generous proportions fit, negotiated equipment and prices, changed my mind about a dozen times but finally made a decision.

Our new toy is a Can-Am Commander XT and our LQ has been converted from a living quarters horse trailer to a low profile toy hauler. That meant removing a couple of stall dividers and installing some tie downs to hold the side by side securely. Hopefully it all works as advertised.

Didn't do much more than get it unloaded as Clayton, Lacey, and the girls were coming for a short visit and to drop off their trailer for the winter. Clayton and I took it for a short spin around the hay field, maybe tomorrow I will take it out to the hills and see how it works
Posted by JB at 7:37 PM 4 comments:

It has only been a week since my last blog post, but I am trying to keep things a little more up to date here. It is hard to use this as a journal to look back on when I only say a few words every two or three months. Last week I wrote we had finally finished the haying here at Dogpound North (DPN), and the last bale had hardly hit the ground when the snow started. A lot of our neighbours and fellow Albertans and even folks over in Saskatchewan are caught with their crops still in the fields. The news reports say the harvest is about 80% finished so that means most of the profit is still laying out under the snow. In the past the oil patch has served as a fall back position for many in the agriculture industry, you could always pick up a few months work over the winter to pump up the cash reserves. Well this year that might not be easy, although the price of oil is playing with $50 it is still pretty slow out there in the patch. Canada desperately needs pipelines that reach tidewater, Canadian tidewater. For the most part our oil has been sold to our neighbours to the south, but that necessitates taking a discounted price and they are less inclined to buy our product as they have a lot of their own now, since the fracking has taken off in the Bakken and Texas. So it really doesn't make much sense for us to sell our oil to them at a discount so that they can in turn export their own production around the world at world prices. Well enough of that topic.

Another piece of news that I thought I would share, this year for the first time since we bought our place down in Arizona, five years ago we are not taking a horse south with us. Brenda, because of her CRPS can't ride, and I am not much on riding by myself so I thought it would be a good time to leave the horses home. We are still taking our LQ with us and if the mood strikes us we may get out and visit some of those old spots we liked to boondock in before we sunk roots into the Maricopa soil. We have no plans to give up Dogpound South (DPS) but might not be tied so tightly to it. Just blueskying but that is one idea anyway.

We are doing what all snowbirds do at this time of year, visiting with our medical teams, planning our departure, and readying the rig for travel. Who knows when we are going to head out but Max is looking at me like, what's the holdup old timer, there is snow on the ground and we should be heading for that warmer place with no grass.

And with those thoughts in mind we have been bringing our security detail up to speed here at DPN, surprisingly the dogs don't seem to mind the company.

All the way up to October

Remember back in June when I was saying we needed a little rain. Well we got it, in fact it started raining at the beginning of July and other than the odd day of sunshine it has continued right through to end of September. The hay here on Dogpound North started getting knocked down on the 17th of July and even taking advantage of every bit of sunshine, it was yesterday, October 6th when the last bale was rolled out. Best I can remember that is about as late as it ever been. We had a big reunion here at DPN for Rebecca and Lacey's cousins in mid-July and actually that was one of the sunny weekends here. 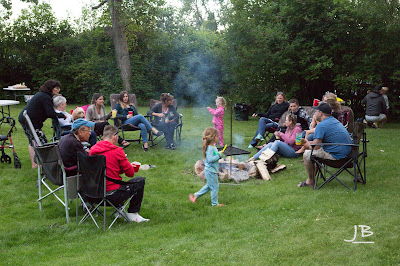 Once we wound up the reunion we followed Clayton and Lacey out to the Bighorn Dam for a few days of chilling by the riverside.


Next stop was Shelly Roste's 60th birthday. Back in almost prehistoric days Shelly and I worked together on Shell's Party 4 wandering around Western Canada looking for oil and gas. Those were back in the good old days before the environmentalist's took over when oil and gas was actually a good thing to find. 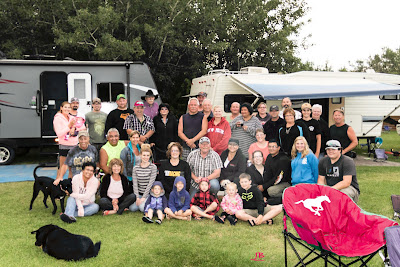 Then a week or so later we headed up to Alliance for a reunion of another sort. Brenda, Derek, John, and Gina have been friends for a long time, I am thinking something like 34 years. They were all just kids when they met in Cochrane and have kept in touch every since. Derek had Brenda as a groomsman at his wedding and he gave Brenda away at ours. Long time readers will remember us heading to Vancouver Island and hiding out on John and Gina's place on the Nanaimo River.

Late in August I was up to the Buffalo Coulee Ranch near Wainwright. My mother grew up near there and my cousins still call it home. The occasion was cousin Blair's wedding and he asked me to come on up and take a few pics. It was a great time and I took a few more than a more, hopefully some of them good and a few real good.


That about covered our gallivanting around for the summer, we had a trip planned out to the Yaha Tinda but the week we were going it was raining, and snowing in the west country so we decided the wiser choice was sticking close to home. I got out a few times to do a little picturing as those who follow me on Facebook are probably more than aware of.

Our horses are fat and happy here at home and I haven't heard one complaint from them about not getting out to the mountains all summer.

What with Brenda's CRPS and my sore leg it has been a lazy summer of eating grass and standing around relaxing for the remuda here at Dogpound North. And probably be a pretty easy winter as I am thinking about not taking any ponies south this winter.

Well that about catches things up to the end of September, and October started off with a big event, my niece, Caron, and her guy Chris tied the knot, so the whole fam damily was down to Canmore for that event. It was a rainy dreary day until an hour or so before the ceremony when the clouds cleared and the sun came out. I have no doubt that brother Brent was responsible for getting the weather in line for his oldest daughters wedding day.

Oh remember back in July when I said we got done with our hay on October 6th, well today is October 7th and we have had snow all day so it was good timing.
Posted by JB at 5:18 PM 4 comments: