Good question, we are just hanging here at Dogpound North getting some dental things caught up on before we start loading the rig for our southern migration. I was off last weekend to do a little shooting, photos, up at Ken and Verna Pohl's. The video was posted previously so I won't bore you with that again, but it was great to see all those folks enjoying a day in the sunshine bringing in the sheaves just like our forefathers did. As I wandered around taking some pics and shooting a little video with the UAV I couldn't help but think what my grandfather would have thought of this operation. He farmed in East Central Alberta on a place that is still in my family, but he was always a forward looking fellow and had one of the first combines in the country. Not being the sentimental type he probably would have thought all of this was crazy, but he sure would have been able to jump in and offer some advice on how to make it all work smoother, although Ken did a pretty good job of that himself.

The weather here at DPN is pretty good, we have had some warm days and a little wind to things have dried up pretty well and the fields around us are full of combines and swathers so the long delayed harvest is coming off fast. Let's hope the folks get all the good weather they need to put their crops in the bin. The video is a lot better with a little Blake Reid, another neighbour just Down the Road from Dogpound but Youtube would have a hairy conniption if I hooked you up with that.

The rest of the week I spent wandering around looking for the right components for my cabinet repairs and that job is on the books for this weekend, well unless I can think of some other excuse to delay it. I am not the handiest guy on the planet and although I have watched a hundred video's and got lots of advice from the experts it is not a job I look forward to.


I was able to put that job out of my mind a few times though, I spent 5 days this week at the pool in Cochrane and logged 20,000 metres over those days and although you can think about things while you are swimming, you can't really accomplish much of anything else. I have always been much better at thinking about work than doing it.


Just checking out this Youtube option. I took a spin up to the North Pohl and shot a few miles of video and a bunch of still shots of Ken Pohl's Threshing operation. The proceeds are dedicated to the Canadian Foodgrains Bank so it was all for a good cause.
Posted by JB at 12:16 AM 1 comment:

I am trying to keep this blog up to date a little more, just as a record for me. I have looked for other journaling solutions, from online diaries to video logs but all have issues, the online diaries don't seem to salve my need for rambling on and on about nothing in particular, as for the video logs, wow, they are a lot of work, and although I have managed to surround myself with a beautiful family and friends the star of the show is not to photogenic and I am not sure I am ready to unveil that on an unsuspecting public. I have a few vlogs I follow, mostly sailing or RV'ing types of folks, and maybe I can develop some kind of vlog that will showcase the places we go and see so that I can have that for when my eyes get to weak to look back at this journal here.

There that has salved my need for nonsensical rambling. It is hard for me to believe I actually used to find enough stuff to write about multiple times a week, but I guess it is a process, and I actually think you do more stuff when you have a blog entry in the back of your mind so maybe it will come back.

We are getting our doctors and dentist visits all up to date around here, winterizing what needs winterizing and our family RV storage lot is gradually filling as those who don't flee the snow bring their rigs back for their winter hibernation. We have our rig winterized but we are hoping we managed to bust it out of winter sometime next month and head for warmer climes. Brenda has a couple of dentist appointments that we have to stay north of the Medicine Line for but mid November we are hoping for a weather window that will allow us to escape.

Yesterday we celebrated our Canadian Thanksgiving here at Dogpound North with the girls, it is always great to see them and especially the grandchildren. Here is the requisite Thanksgiving Dinner shot. 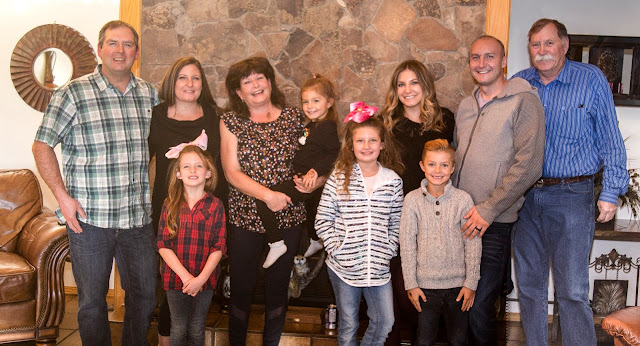 I won't bore you with all the great photos of my grandchildren I got, those of you who are on Facebook with me have already seen them all, but here are a couple of my favourites from the day. 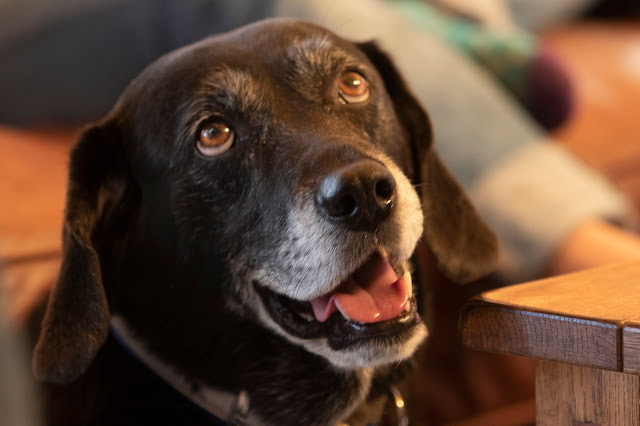 Looking out the window it is looking like winter has returned to DPN and I hear it is out in full force up at the Buffalo Creek Ranch in East Central Alberta as well, so it may very well be province wide.
Posted by JB at 12:25 PM 2 comments:

Not a lot happening here at Dogpound North. September has not been the nicest month around these parts, kind of cool, a little rain and some flurries, yes flurries. We ran up to Rocky a couple of weeks ago for "Bring your Grandparents to School Day" at Ella and Alle's school. It is nice to check out where the girls spend their days and they seem pretty excited to show Grandma and I around their schools. After spending the afternoon with them we met up with their Mom and Dad to break a little bread before skedaddling for home.

I did manage to get out a couple of days and see a little country, it was raining much of the time on the Eastern Slopes but once I broke over the front ranges it seemed that there was a little more sunshine to be found. The shot below is on the Forestry Trunk Road south of Highwood House dropping down into Cataract Creek.

This shot is of a new gate out in the Yaha Tinda's horse pasture looking west towards Warden's Rock on of my favourite views at any time of the year. 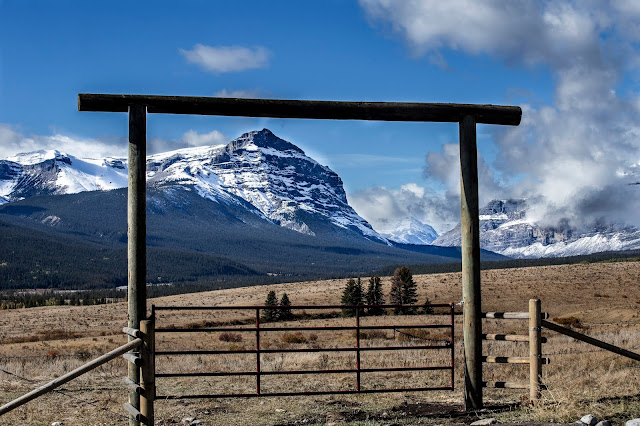 It was pretty obvious out in the West Country that fall was in the air and winter not far behind. And even here at Dogpound North the leaves are turning and the horses are wearing their winter coats. 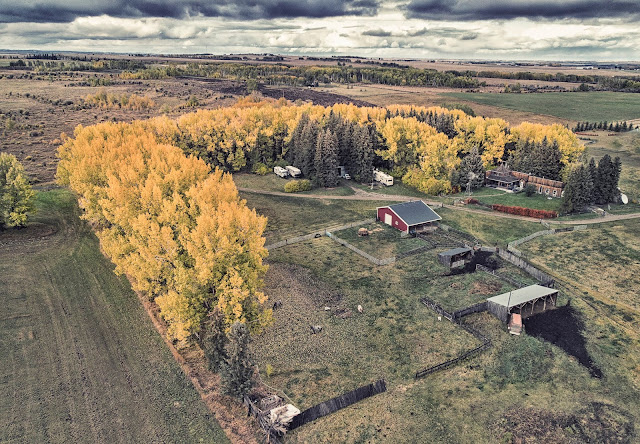 This past weekend Justin came down to Carstairs for a couple of days riding bulls so I managed to sneak over and take a photo or two. The bulls weren't cooperating with me and most of the daylight shots they decided to show me their heels so this one was taken late at night. Justins first bull came out of the chute backwards so he got a re-ride option but that meant he was riding at 10:20 at night so the light wasn't great for the camera but the ride was pretty nice. 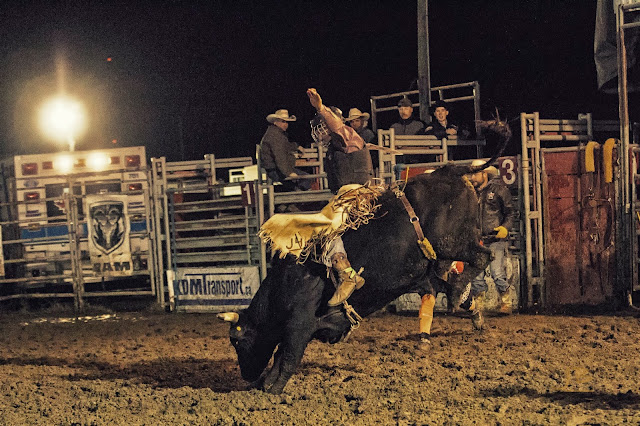 You can see the legs just under the bull and the shadow to the right of the picture, those are the bull fighters, these guys are the heroes in these events making sure these kids get down off these bulls safely. I know Justin has a lot of faith in them and depends on them to get him out of tight spots and make sure the bull doesn't grind him into the ground after his ride. Thanks guys.

Remember back a couple of paragraphs ago when I said September wasn't the greatest weather, but as it turns out October isn't looking much better, at least with what we have seen these first few days. Monday night it started snowing and pretty much kept it up all night and most of the next day. I took this shot of a gang of robins hanging around under our apple tree enjoying a little frozen fruit salad and discussing when would be a good time to head out of the country. 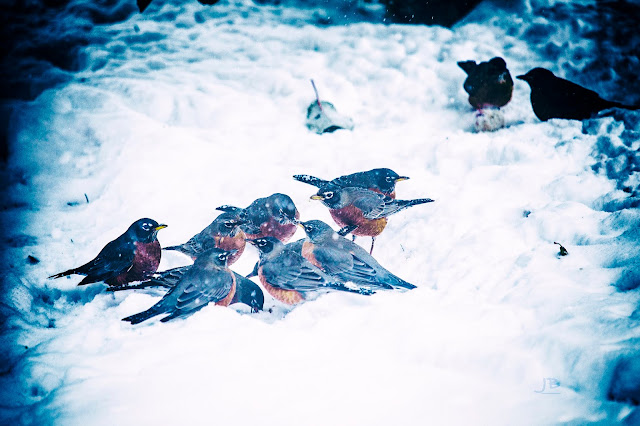 The snow came down thick and steady and when it finally quit we had a little over ten inches out in  middle of the yard away from the buildings. You have all seen the moose we have hanging around here in the winter, well we frequently have other visitors as well, this photo is one half of the onsite security that hangs out here all winter. He was doing his morning rounds when I captured him checking the perimeter. 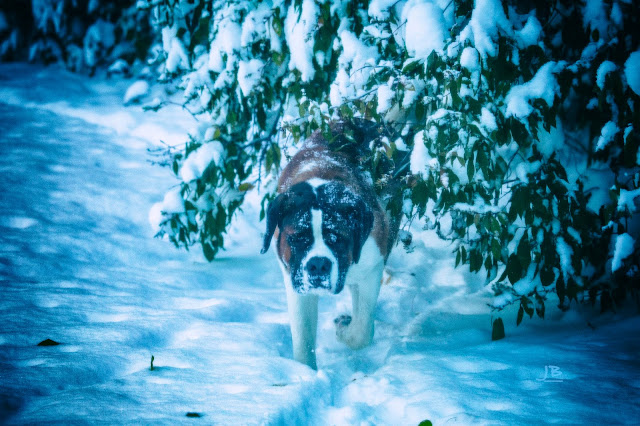 The last couple of days we haven't had any snow which is probably a good thing as many of our neighbours still have crops in the field to harvest, but it will take a while and a different forecast for harvest to resume around these parts. Till next time.
Posted by JB at 8:08 PM 4 comments: