Still in the heart of winter on the Northern Ranges. Not a lot of exciting things going on this week at work and in my job that is a good thing. We had a couple of clear days and it is nice to see the sun but they were shortlived and it was back to low clouds and snow later in the week.

Friday night I headed for Calgary on the plane and Brenda picked me up at the airport. Saturday we ran into town to get my haircut, was about time it was either that or buy some elastics for my pony tail. Once that was taken care of we stopped by the Cochrane Ag Society where my niece Caron and the girls, Sidney and Lucy, were getting ready to compete in the Hunter/Jumper classes. They were not going till later in the afternoon and we had a date with Ms. Ella so had to run. Tonight is Ella’s dads birthday party and Ms. Ella is spending the evening with us. 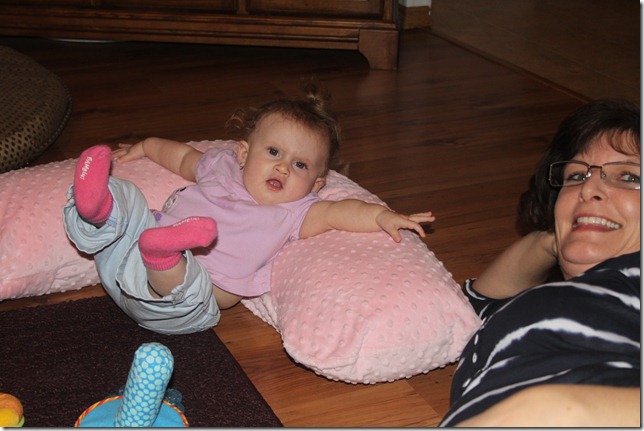 Just lounging about with Grandma!

Well it was another great weekend followed by a week (Tuesday to Friday) in Fort St John. The weather has been pretty gloomy around here this week but I guess it is January in Alberta. But we usually have some sunshine around even at this time of year. Flying up to FSJ on Tuesday morning and returning Friday night makes for a pretty short work week, but reading the blogs of all our friends roaming the sunbelt makes the time seem to slow down here in the North country. Friday night, the 22nd, my Mom, Dad and brother Brent and his wife Trish went out for dinner at Casa D’Italia a good restaurant in the city. It was a night of family time that coincided with the first anniversary of my youngest brother Kelly passing away. It was an enjoyable evening and the food was certainly OK.

Saturday was a shopping day, my computer had packed it in earlier in the week and I was relegated to using my little Netbook to communicate so we ran in to have a look at some computers in the city. My son has a great gaming computer but the salesman looked at me and said it was to fancy for the likes of me. Probably good advice, I am not sure what I would do with all those fancy doodads and geegaws anyway, so he moved me down into the Grandpa model, a little slower and not so sporty. Kind of the four door sedan of street racers. But it seems to work and has none of those quirks that Brenda has with her Mac. Now for the job of transferring all that accumulated data from my backup drives to the new one. And a shopping trip wouldn’t be complete without some new clothes although I think this time I got more than Brenda. Time for a new hat and some new jeans.

Sunday was just a layabout day other than trying to move a bunch more files onto the new computer and going to granddaughter Madison’s riding lessons. The picture below is our eldest granddaughter Claire. 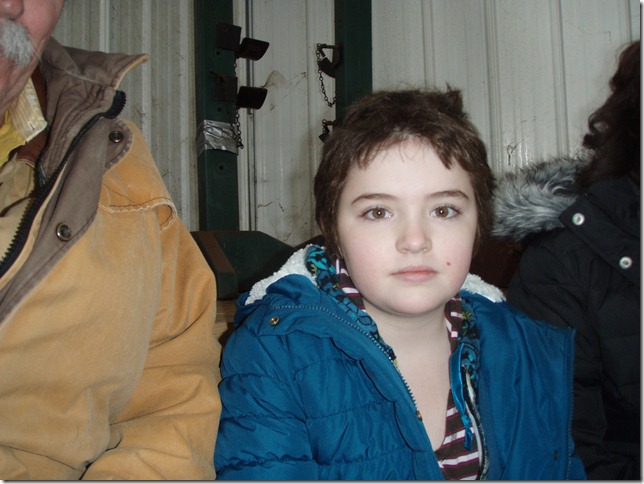 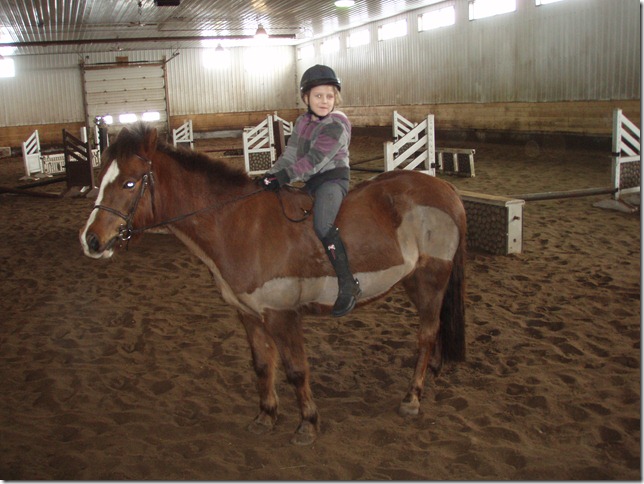 And the shot above is of Madison and Cookie, Madison is the one with the helmet on!!

Well I have started my new schedule at work so a few weeks a month I will only be putting in four days (Tuesday to Friday) in Fort St. John. I will charter out of Calgary on Tuesday morning and then return Friday at supper time. This weekend, on Saturday Brenda and I had a look at a new mall just north of the city, Cross Iron Mills, lots of high end stores and a pretty cool Bass Pro Shop also. It was kind of nice to notice that the decor in the Bass Pro reflected the Alberta landscape and wildlife. We had my son Matt down for dinner that evening and had a nice visit with him. He is contemplating buying our home and for the time being we are holding court in my Dad’s house just down the road. Dad moves to the city for the winter and once spring arrives we are planning on moving into the RV fulltime so should be out of his way when he returns.

Sunday we took a run out to Trish and Brent’s, my brother and sister-in-law, cabin near Canmore in the Canadian Rockies. They have a beautiful spot right in the shadow of the mountains and yet less than an hour from the city. As is pretty common in the blogging and RVing world we took the opportunity to break some bread while we were there. A bowl of Brenda’s Butternut Squash soup and Grilled Cheese and pickles sandwiches. Sure hit the spot but the chance to have a visit was even better. When we got home Michelle and Madison our granddaughter were at the farm and our horses looked full of carrots and we had a short visit before they and Matt took off for dinner in Cochrane

And today we ran up to Rocky Mountain House and visited our newest granddaughter Ms. Ella, as usual she was a charmer, such a well behaved baby and always smiling, must take after her grandfather I think. 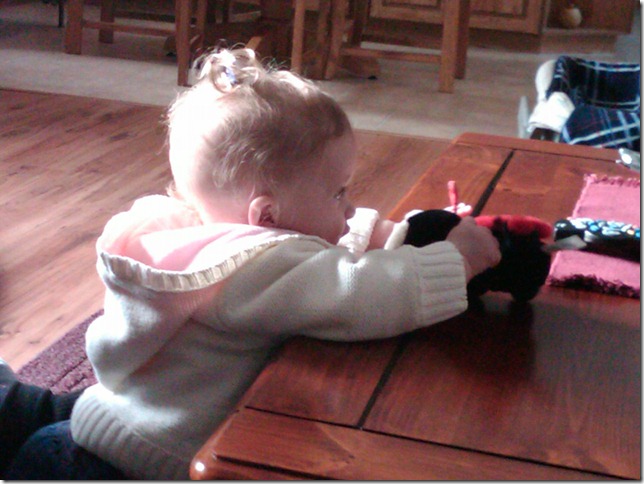 Well the journey is back on track after a very long 8 month hiatus. It will be journey in name only at first as I am involved with a project in North Eastern British Columbia and that is not likely to be done until late April or early May. Much as we would like to join our friends in Texas we figured what with the winter they are having down there it is not much cooler up here and the pay is certainly better so we will not be rolling south until later in the year. We have made some plans based on being fulltime in the motorhome starting in May. We will be hanging around Alberta and taking some short trips here, both to the mountains with the horses, and to visit friends and family over the summer. Fall is a long way off but we are toying with the idea of hitting the Escapade in Goshen in September and then heading back north to enjoy the fall colours in the Canadian Maritime provinces before running to the sun as winter descends on these northern ranges.

That’s a pretty short way to start off this renewal but I am a little out of practise at this blogging stuff and we will see how it goes as time rolls on.

I can’t resist a little bragging on the Canadian Health Care system though. A couple of months ago I wrote a blog focussing on some of the things that had happened in my family with regards to healthcare in an effort to correct some misconceptions I hear from the media south of the medicine line. Since that time my family has been involved in some more medical issues, my brother has had some ablation therapy done on his heart and then a follow up visit to the hospital to deal with some of the recovery issues. All is well and the wait time was next to none for the whole process. Both my father and I have undergone some stress testing on our hearts and that took about 2 weeks total from suggestion that we should have it done till completion. And actually one of those week with me was because I was at the Rodeo in Vegas and had to schedule things for after I returned. My brother-in-law had a procedure done to relief the pressure in his eyes and that process was probably a week in total from diagnosis to treatment. Oh yah and in the midst of all these heart and eye thingy’s my sister-in-law took a tumble with skiing and ripped up her ACL and MCL so she will need some fixing to get her back to normal. So we have lots of specialists looking after us and lots of fancy equipment being used. Although the results are not all in and there are some follow-up things that need to be done it is all being done in a timely manner and best of all the cost to my family was nada, nothing, zilch. Well it is not really free, it is just our tax money at work. Just one of the benefits of being a citizen of the True North.