It has been a few days since my last blog post. Many of our regular readers have certainly wondered what happen to us.

Thursday the 22nd early in the morning I got a call from my brother, Brent, to let me know that he was on the way to the hospital in Calgary, but that our little brother had passed away.

Shocking doesn't describe it, at first my mind thought "Kelly, who, I only know one Kelly and he is the most unlikely person to have a heart attack I know." Kelly was a fit healthy guy, 50 years old but not any extra weight and always a pretty active guy with a regular workout schedule that is supposed to waylay these kinds of issues. Brent and I both have histories of heart issues, but not Kelly, he seemed to have escaped that part of our genetic make-up. But sadly it was true; he had passed away in same house he came home from the hospital to as a new baby. Dad always said it didn't look like Kelly was going to move away so he finally sold him the house.

Like I said he was our baby brother so almost every step of his way through life I was watching to see what he would do next (and that was never boring). I remember the day he came home from the hospital and the way Brent and I roared into the house with all our grubby little friends in tow to show off our brand new baby brother. Didn't take Mom long to give us the bums rush as she didn't want her shiny new baby mauled by a lot of grubby kids. I think pretty soon she got used to us as I don't remember not being allowed to paw him for very long.

When Brent and I used to go to school down the road Kelly could always be counted on to accompany us on his tricycle and mom talks about him always asking every kid coming down that street if they had seen "JohnnyBrent". 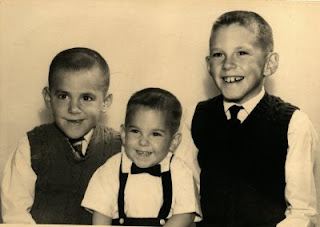 When we were kids my Mom was quite a seamstress so there are a lot of pictures of the three of us all wearing matching shirts. I was always taller and skinnier (not anymore, the skinny part anyway) and Brent and Kelly were much more alike so they actually look like big and small versions of the same guy. I don't think any of those pictures show Kelly without a big grin on his face.

Kelly Brown was a fearless skier who spent a large part of his time on any mountain going straight down the fall line, long traverses being for lesser mortals. In the tribute at the funeral Brent painted a word picture that will forever stick in my mind of Kelly floating effortlessly down the mountain through chest deep untracked powder and although I was never a good enough skier to accomplish that myself I well remember riding up the chair lift at Sunshine one day 25 or so years ago and seeing him doing exactly that directly under the lift. Nobody else had dared to take that run and the guy I was riding with couldn't believe what he was seeing nor when we came close enough that the fearless fellow below us was actually my baby brother.

My father is a pretty good gardener so when Kelly took over the house it already had a great deal of landscaping finished and mature, but I think over the years he owned it the garden got even better. You could always find him working there in his yard any time he had a few spare moments. For the great majority of his life he was a bachelor and I'm not sure whether they are connected or not but he spent a lot of time doing the things that gave him pleasure. He skied most of the great mountains in Western North America in the winter and drove his little Triumph TR-6 all through the west in the summer.

All that said he was always around when you needed someone to help with odd jobs. I don't like heights so when we needed to re-roof the old barn Kelly was pressed into service to do the high work. The same thing when the windmill needed some maintenance, Kelly was the man for the job. I don't know what I am going to do without my high angle go-to guy.

A few years ago though, he was struck by a young lady who caught his fancy, and whom he eventually convinced, that he was the guy for her. He and Christine had a great relationship and were good friends first and lovers second. That certainly made his last two years amongst the happiest of his life. Thanks for that Christine.

His memorial service was a great testament to the number of lives he had impacted in his short time here, there must have been at least 400 hundred, maybe 500 folks in attendance and I am betting almost everyone could have told a story about Kelly Brown and how he had added to their collection of lifetime stories. I know I could go on for days or weeks telling absolutely true tales that most people wouldn't believe had actually happened but that was the kind of guy he was.

All these words describe the Kelly Brown that I knew, Irreverent, Politically Un-correct, Outspoken, Opinionated, Kind, Caring, Loving, Funny, Hard-working, Fun Loving, Courageous, Adventurer, Loyal, and most of all a friend you could depend on.

One of Kelly Brown's lifelong friends, who now lives in Melbourne, Australia, sent us a Tribute to Kelly Brown that characterized him as what the Australians call a Larrikin. I stole the definitions here from Wikipedia and if they don't describe the man I called my baby brother I must have missed the point

Larrikin - "a mischievous or frolicsome youth"

"A person may be classified as a larrikin if he or she meets some of these criteria. A larrikin is not concerned with the opinion of other people and so is not socially intimidated into modifying behaviour and structuring it around social norms. Larrikins are also not at all fazed by authorities of all kinds, including whatever power or authority they may possess themselves, and must not take themselves too seriously." I am assuming that when you meet all the criteria you are a Super Larrikin, well Kelly you make the grade.

That pretty much sums up Kelly Brown and although he is gone, he will never be forgotten, he lives on in the hearts of hundreds of people, those who joined at his wake, his memorial, and those who were unable to. Although I confess at times he infuriated me I can honestly say I was always proud to call him my little brother.

As always in the middle of things with his infectious grin 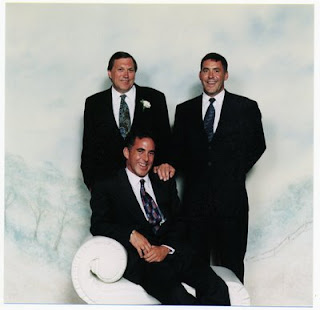