We headed out of Dogpound South last Wednesday towards a spot over near the La Paz Valley. We have been there before but it was a long while back, in fact almost 6 years ago was the last time we left there. It was great to get back to that wonderful spot. It is quiet and off the beaten track and although the madness that is Quartzite in January is only an hour away it doesn't spill over towards our spot. Although this a great spot for chillin' and riding the Can-Am it would not be so good for the ponies as it is pretty rocky. I spent some time riding some old trails that I had walked extensively 6 years ago, but although Blue II can cover a lot more ground in a lot less time than Shank's Pony he is restricted to existing trails where on foot you can roam wherever your mind tends to lead.

My riding partners changed on an almost daily basis, sometimes Brenda came along, but when she opted to enjoy the peace and quiet in camp Max was more than willing to climb aboard and see the country.

He is probably wondering where to get some of those Doggles that Emmi from Montana has for riding the desert.


Long time readers will recall some shots from atop this hill taken back in January 2011. I am here to tell you it was a lot quicker and certainly easier on the lungs getting back up here on Blue II rather than Shank's Mare. If you click on this shot and enlarge it the red arrow is pointing at our site this year. 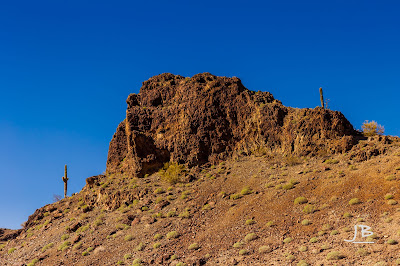 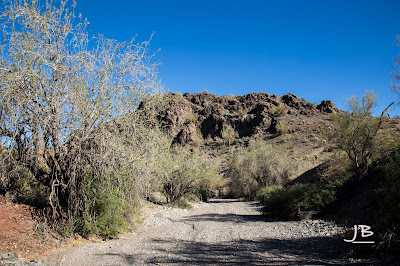 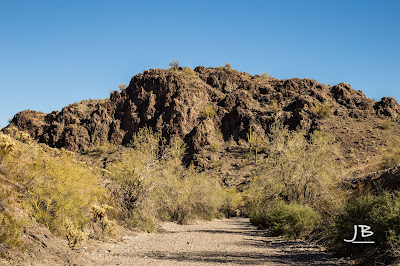 I stumbled on these store fronts along the trail, I have no idea how or why they came to be there. Out back are pens that look like stabling but not much sign of critters being held there. 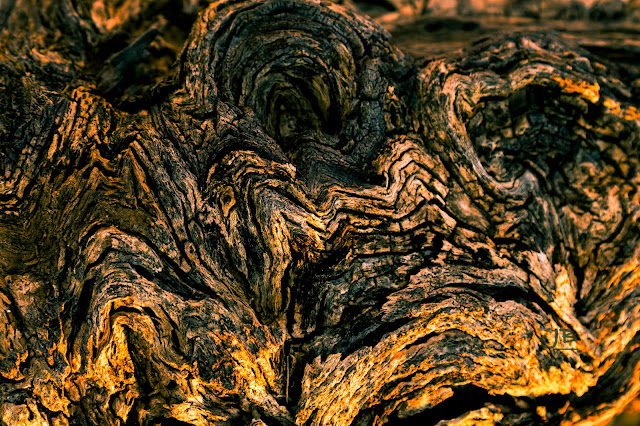 An interesting piece of wood that I found along the wash.

We thoroughly enjoy our stay in the desert, I think between Brenda and I, we consumed about 7 or 8 books and still saw a lot of country. Although we didn't see to many other folks out there it is obvious that we are pretty pokey when it comes to ATV'ing, we rather enjoy moseying along at 6 or 8 miles an hours snooping in every nook and cranny and watching for the things that those hurtling along at breakneck speeds might miss. 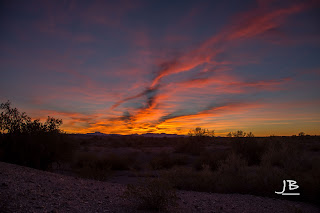 January has been a pretty laid back month for me, but Brenda has been out and about. She made a trip back to Canada to see her dentist and doctor. She picked a week that the temps were down around -30C so she was glad to get back to DPS. And she brought her sister, sister-in-law, and best friend since she was 10 back with her. Cheryl has been a huge help to her when she has to make her periodic trips back to the North Country and we are glad she took the opportunity to come on down to DPS for a visit. The weather here has been typical for mid-January but a whole lot warmer than back on the Northern Ranges.

Me, I've been doing a little swimming and some riding in the desert with Blue II and taking a few photos along the way.

It is a quick run from DPS to Lookout Point in Blue II, and running back after dark is pretty quick also. It wouldn't be near as fast on Ol' Blue himself. I did get out a day or two for a ride in the desert with Josie Staden, my friend Phil is laid up with a strained back, but is getting back in the saddle this weekend for a ride at Picket Post. A few team ropers here have asked me to lead them around the mountain, and Phil is letting me use one of his ponies for that gig.

Cheryl is heading back north on Monday so she and Brenda have a busy weekend of shopping, casino visits, etc. planned for the next few days.

Stay tuned for some upcoming travels, if the weather holds and Brenda is feeling up to it we are heading back into the past for a little boondocking at one of our favourite spots ever. Click on this link for a peek into the past. We might even catch up with few of the bloggers on our sidebar over at Bloggerfest.

Brenda and I had a busy pre-Christmas time so the last little while we have been sticking pretty close to home. I have been making my almost daily pilgrimage to the pool to try and keep all the good eating around DPS at bay or at least so I don't have to buy new clothes.

Most days I have the pool to myself for almost the entire 2 hours that I swim but Brenda has joined me a couple of times, so that eight lanes is a little crowded with the 2 of us in there. I am sure the lifeguards are bored to death watching one guy plod back and forth, back and forth.

Yesterday we combined a Costco run with a trip over to Gold Canyon for a session for both of us with Dr. Cassie the Chiropractor lady. She had done such a good job with Brenda's adjustment that I thought I would let her take a whirl at my lower back and leg issue. She took a couple of X-rays and said yep I still had a backbone and it looked like it was 64 years old, so with a few crunches and a lot of cracking she finished up with me and sent me home. I am never sure whether this stuff works or not but this morning in the pool my lower back felt great so maybe there is something to it all.

Today after my swim I raced home to grab a sandwich and then threw my saddle in the truck and headed over to Phil Staden's place. Phil had brought down three horses and offered me an opportunity to take one of them out on a ride. Cash was a great little pony, well behaved and a pleasure to ride that was for sure. It has been months since I last rode and that time my leg was killing me so I was eager to see if that issue was still there. We took a trail we had scouted out a year or two ago west of us. It has some challenging spots and some just nice wash riding so it was a great place to test out my leg. 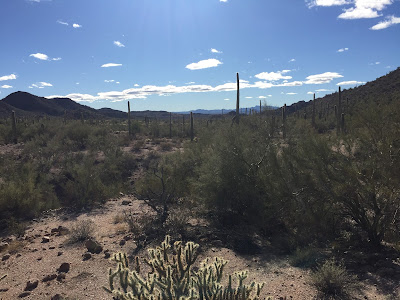 It was great to be back in the saddle, the leg stood up OK. Rene' the fellow at the back of that shot is the guy who bought your brothers place. Thanks Phil for the great horse.
Posted by JB at 9:26 PM 2 comments:

Today we received bad news. A long time friend of ours and a long time blogger in the RV World crossed the big ridge. Rod and his wife Loyce were friends we made when were wandering around the sunbelt back in 2009. We first ran into them in Kerrville, Texas when we headed over there for a gathering of RV folks. We again shared a campground with them in Rockport, Texas and cemented a friendship that has only gotten better over the years. Only other bloggers will know how much these folks who you might only see once or twice every year or two, but share your life with on a daily basis can become a big part of your life.

Rod was one of those larger than life folks who just burst into your life and held nothing back. He and I, both political junkies, spent a lot of online time debating the relative merits of both of our governments. Not surprising to anyone who knows me I have spent a lot of time trying to make sure I understood the American system of government, but Rod, much to my surprise spent an equal amount of time delving into our Canadian system, so we gave both nations the benefit of our combined wisdom, not sure they listened, but we did over the years solve most of the issues that arose.

Any tribute to Rod is not complete without some mention of Loyce. They were married for 45 years and when Loyce predeceased him back in 2013, Rod lost his touchstone. It was plain to us everytime we spoke with or visited with Rod and his companion Biscuit that never a day went by that he didn't miss his wife. He said on his blog that he was lost without her, and although he was out and about as she would have wanted, it was obvious that he missed her every step of the way. I'll include a link to my journal entry about Loyce and here's a few pictures that we collected over the years.

Brenda and I have spent most of time since we heard the news from Rod's family alternating between grieving the loss of a friend and chuckling as we remembered times and stories we shared with Rod and Loyce. It probably seems a little irreverent but we both figured about 8 AM yesterday morning when that boisterous good man left this world and stepped into the next, there was a pretty excited girl there to meet him who was thinking "well there goes the peace and quiet, things are about to get a little livelier around this place now."