Where Did They Go?

So when I last wrote a blog we were still in Jamaica celebrating Lacey and Clayton's marriage, and now that they are old married folks it is probably time for me to get this journal updated. We did manage to get out of Jamaica, but I had a tough time explaining to the US Customs and Border agent why my passport wasn't stamped each and every time I had been in and out of the States over the last year. She told me I needed it stamped and I told her that I made it a practice not to tell Border Crossing folks how to do their job and that policy has served me well over the last 60 odd years of crossing the Medicine Line. Usually when you fly you get a stamp, but as I drive, can't fit the horses on a plane, you don't usually get a stamp. They just scan your passport and we all have heard how the computers are working now and they are keeping track of our movements much better. Well, maybe you guys, but apparently not me. I finally convinced the nice lady that I had no intention of becoming an illegal alien and had kept a good record of my comings and goings just in case the government needed them and she let me on through.

The last year has been an interesting experiment, what with Brenda's knee replacement not going so well, but we have discovered one, maybe the only, benefit of her plight. When we travel we usually get a wheelchair to get from the check-in to the gate and back. Most airlines also supply a driver for that conveyance. And those folks know how to get around those big places in a hurry. It means no waiting at the Security Check and priority boarding. Big benefit entering Jamaica, our lady driver knew the ropes and we were through Immigration and Customs quicker than you can blink. And coming back out of Montego Bay there was at least a thousand people in the line and we scooted right to the front. And nobody even gives a lady in a wheelchair and her bodyguard a second look.

It was an interesting winter from a horsepersons point of view. Arizona had an early outbreak of a critter disease called Vesticular Stomatitis which meant all our horses were going to have to be out of Arizona for 21 days before they were allowed to cross the border back into Canada. So we made a plan to wander our way home slowly after sprinting for the Arizona/Utah border to get the clock ticking.

As it turned out the outbreak took a break and the Canadian government allowed horses that had not been in the county in southern Arizona with the problem to head for home without the 21 day condition. But we had some plans made and decided at least part of them needed to be acted on.

Hard to believe but in all the miles we have driven around the United States and the many years we have been to Arizona, we had never gotten to see the Grand Canyon, except from 35,000 feet as we flew by it. This time we combined it with a trip to Dave and Linda Modahl's ranch in Northern Arizona.


After enjoying Dave and Linda's "Lazy D Ranch" for four days we headed for the big ditch.

Words really can not describe this place, it is truly a wondrous place, and I will let the pictures do the talking.

Through the wonders of the internet we knew folks who knew folks who had scouted out a site we could camp with our horses and and still be within riding distance of the Canyon. 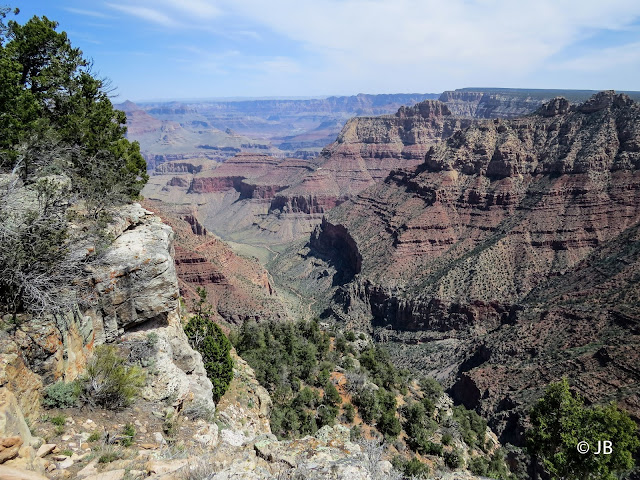 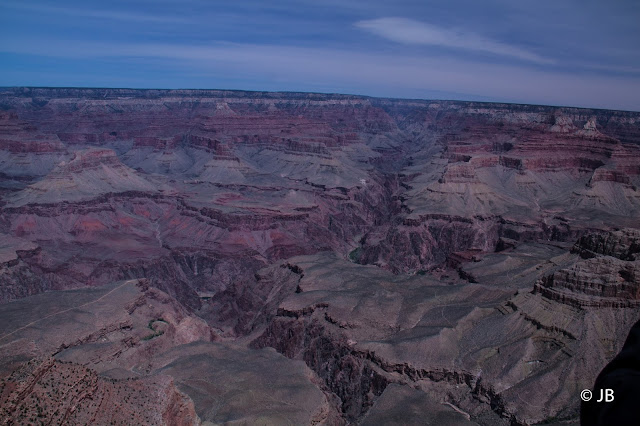 It was a great place and we will be back. But once I got done riding over and having another look down from horseback Brenda and I loaded up and headed north. The next night we were in Dillon, Montana and heading for the border the next day. All our worry over the border crossing was for naught, the fellow just took copies our horse papers and sent us on our way. Not much excitement there but a little farther along in our journey our Pressure Pro sent us a message telling us that things were going to get a little more exciting if we didn't find a tire shop pronto. As luck would have it we were a block from a great little tire shop in Nanton and they quickly pulled off the flat and put the spare on for us. They checked out the tire and discovered that the wheel had a crack in it. After talking to my tire expert and favourite tire selling cousin I decided to change all the wheels on the trailer from the cast aluminum mags to plain jane, but strong, steel. While we were at it we also switched the tires to a set of Goodyear G114's.

Since we got back here down the road from Dogpound we have been to a couple of birthday parties and visited a few folks but have been sticking pretty close to the ranch otherwise.

I always tell folks that wondering what to do to keep busy is a non-issue if you have a farm and Brenda and I have been busy cleaning up after our early snow last September, fixing a water leak in our outside system that developed over the winter and general yard maintenance, including replacing our crumbling retaining wall. Just another century or two and we'll have that "to do" list whipped.

Now in a blast of information you are caught up and maybe, just maybe I can keep a little more abreast of things in the future.