Shop Till You Drop...

Today the girls decided to dispense with the restraints of polite society and dump us men and head off shopping. Now given a choice between endless ambling up and down isles looking at a never ending bunch of gee gaws and do-ma-hickies and staying home and working on the blog page I chose this.....surprise......surprise. Gina, Becky, Sheri, Ginger and Brenda all jumped in Sheri's truck and off they went. I thought about calling Visa and Mastercard and declaring our cards missing but it wasn't so bad, we should be able to recoup enough money by camping in Walmart for the next month to enable us to buy fuel to get home. All in all the trip was a big success and there will be many stories that may be told but we will have to wait and see if Ginger breaks the code of silence in the blog world.
Here is a shot of the shopping Ladies from l to r: Sheri, Brenda, Ginger, Becky, and Gina 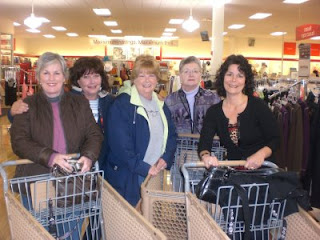 And of course after all that hard work they needed to stop for lunch. 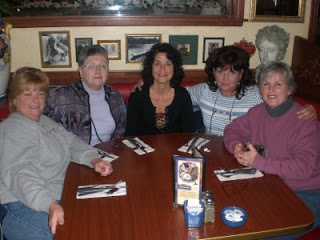 Tonight is Breakfast for Dinner and we will be cooking eggs in a bag for the main course. As usual the side dishes will probably be the feature. I know there will be at least three Frozen Peanut Butter Pies and Fresh Homemade Waffles with whipped cream and strawberries there and only time will tell for sure what other taste sensations will make an appearance. It was a hive of activity and conversation was buzzing all over the place. This group of folks seem to have no end of subjects that they can talk about and some of them actually even know what it is they are talking about. Below is a shot of some of the Sous Chefs hard at work making sure everything was ready and up to their exacting standards, hard to get them all to stand still to get their pictures taken. 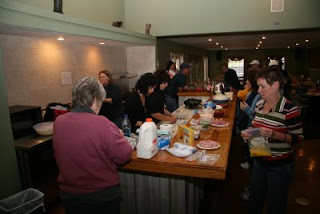 And here in the dark is the Egg Master (Mark) himself, he personally put his finger print on every omelet before releasing it to it's eagerly waiting eater. 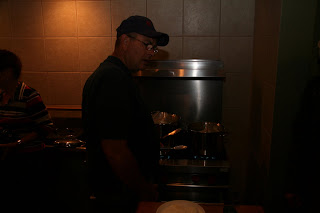 And we thought that we should at least get one group shot of those that are still here at Buckhorn. Some have already left and others are yet to come but for those of us here it has been a wonderful week full of visiting and great conversation along with gales of laughter. Not to mention that we have eaten almost all the food in Kerrville. If a famine is declared in the neighbourhood you know who caused it. 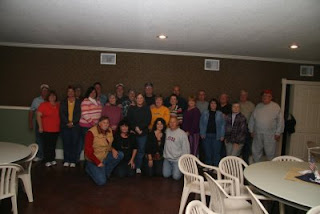 After dinner we had many of the folks over to our motorhome for a nightcap, and another, and another and so on. Again much laughter, many stories told and even some created. Hopefully Gingers head will survive the meeting with our table. The table appears to have suffered no ill effects but I am sure she will have a bump to help her remember that we didn't have enough chairs for everyone.