Parting is Such Sweet Sorrow

Hey, that sounds like a poem or a song or something. And who says I've never read the classics. Well to tell the truth I have no idea where I read it but it is one of those pieces of trivia that float around my head just waiting for a chance to escape and inflict themselves on an unsuspecting public. We had to pack our rig and pull out of Kerrville and leave the "Gathering of Dreamers" behind today. It was not easy, we have had a blast the last 8 days and really didn't want it to end. But the beauty of this lifestyle is it is not "Goodbye" but "See ya Later". We were hooked and ready to roll by 8:30 AM and stopped to shake some hands and give some goodbye hugs as we pulled around and headed out. Those of you we missed were probably still enjoying your sleep so "y'all come back y'here", we'll catch ya later, eh!

Once we got on the road we headed towards Rockport and The Last Resort. Along the way we stopped to get some fuel and this time our sponsorship went to the great company that is sponsoring our retirement. Strange that although Shell is a global concern us Canadians don't get our employee discount at American stations. What's up with that eh! That said the price was good and the service as usual was stellar. 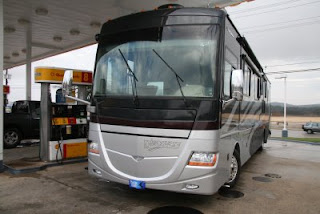 After fueling up we hit the road again, through San Antonio and on down towards the coast. This is pretty flat country and it looked like a tidal surge would reach 50 miles from the coast through here. It was raining off and on most of the way, but the country looked like it really needed it so we will wait for the great weather to return tomorrow.

We got here about 1:15 and checked in for our month's stay. We had talked with folks at the Gathering who had stayed here and our friends Dennis and Denice had come on ahead a week or so ago so it was like driving into a familiar place. Before we got past the office we decided we liked it enough that we spoke for a spot (#87) next January. There are a bunch of folks that are going to be here that we now know and we thought this would give them a chance to perfect their Canadian accents.

The rain is coming down pretty steady here and our satellite is having a difficult time finding it's signal but I am sure once the weather clears that will resolve itself. If not there are a lot of channels on the cable here in the park but we like to see the Canadian news once in a while so are hopeful that Star Choice will come through.
We were over to Dennis and Denice's for supper tonight. It was great and we thought the eating was over after we left Kerrville. Once again I was wrong. Oh well there are worse things to be wrong about.......LOL
Posted by JB at 1:42 PM