Golly dog, what is he talking about. Well I am just trying to record some of the expressions of speech that my friends here at Cowtown have exposed me to these past few days. We have a wide mix of folks here, Texans, Louisianans, Californians and even a fellow from Washington state.

Still cool here in NE Texas but not as cool as back home. Meg and I headed out for our morning walk this morning and I was wearing my sweatshirt and a vest, she just had her usual fur coat on. We walked down pretty near to Exit 418, near the MACdonalds (another Louisiana phrase), where there is a new development going in and there is space for Meg to get off the leash and get a little running around in. Takes us about an hour round trip so it gets us both a little exercise, because for the rest of the day we don’t do much that doesn’t involve food.

Today we are headed over to the Penzey’s Spice store north of Dallas, golly dog, it is a long way over there. I don’t think Marco Polo went much farther to get his spices and probably didn’t have any more missed turns either. They sure have a large selection of spices and it is to bad Brenda was not feeling well and opted out because she is better suited to shopping for spices than I am. After I smelled a few of them it seemed like they all started smelling the same. Well I bought a jar of Apple Pie spice that I liked as well as a bottle of powdered horse radish that you just mix with water and use anyway, but am sure Brenda would have found many more that she could use. 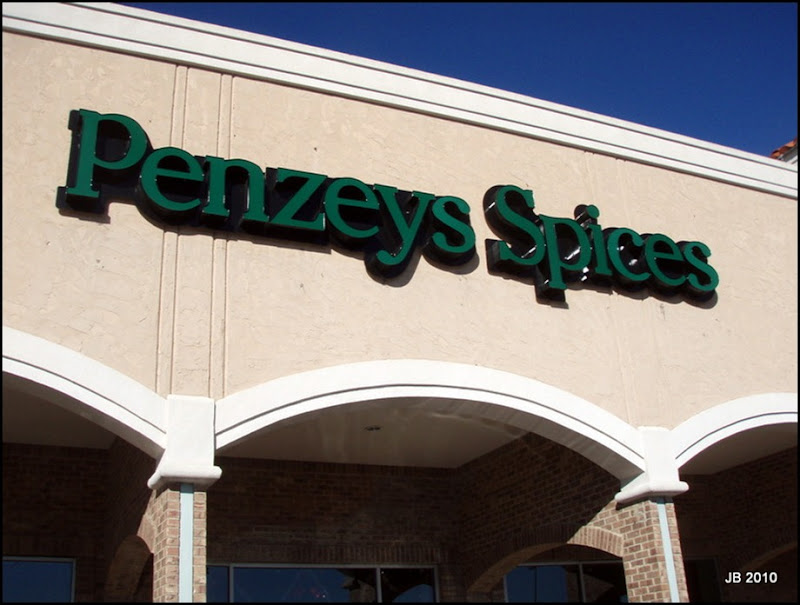 And just in case you are wondering we did see one of Marco Polo’s camels in with a herd of buffalo on  the way home from Penzey’s.

Then we headed off to Goff’s for what they called a Salad Burger, but don’t fear I have not gone vegan that is just how they describe a cheeseburger with lettuce and tomatoes. Once that was done we headed for Cabela’s in search of some Cinnamon Apple jelly. After looking all over the store and settling for Strawberry Rhubarb jam I headed out only to run back in after Deb located the last bottle of Cinnamon Apple jelly in captivity.

After we were done in Cabela’s we headed back to the Cowtown RV Park to check on Brenda and plan our dinner. The girls decided that we should eat Chinese tonight and make it a whole day off for our overworked cooks.