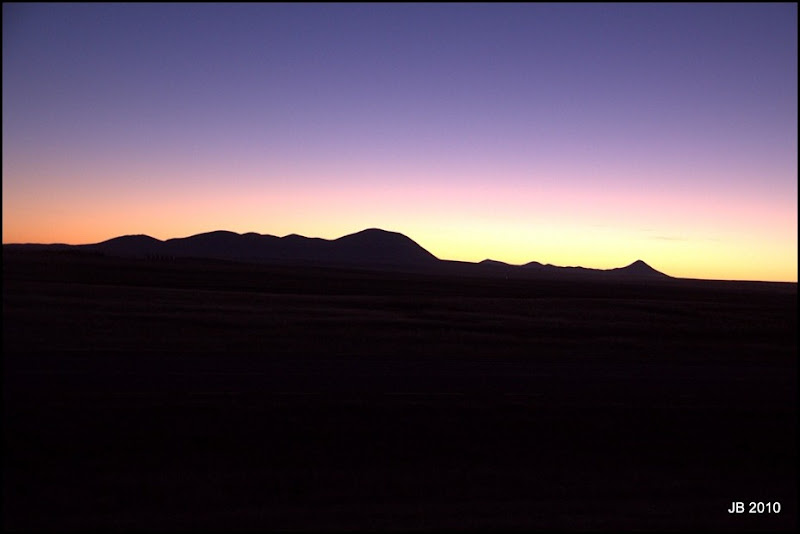 The Sweet Grass hills just east of the border crossing

We got on the road this morning a few minutes after 7:00AM and hit the Duty Free a few minutes later. Brenda had to stock up on her cigarettes and then it was off to the border. We got a very pleasant young lady who asked all the usual questions and did it without sounding like she thought we were bringing some horrible disease or weapons of mass destruction into the USA. After a couple of minutes of that she sent us on our way with a “have a good time, and we will see you in the spring when you migrate the other way.” Certainly a stress free crossing. Then it was off to the Flying J in Great Falls for another couple of hundred dollars worth of diesel fuel to move us on down the road. Paid only a couple of cents less per gallon than at the Flying J in Red Deer last week.

Once we got some fuel we headed through Great Falls and after dodging the suicidal guy who pulled in front of us and then slammed on his brakes we took off for Judith Gap. 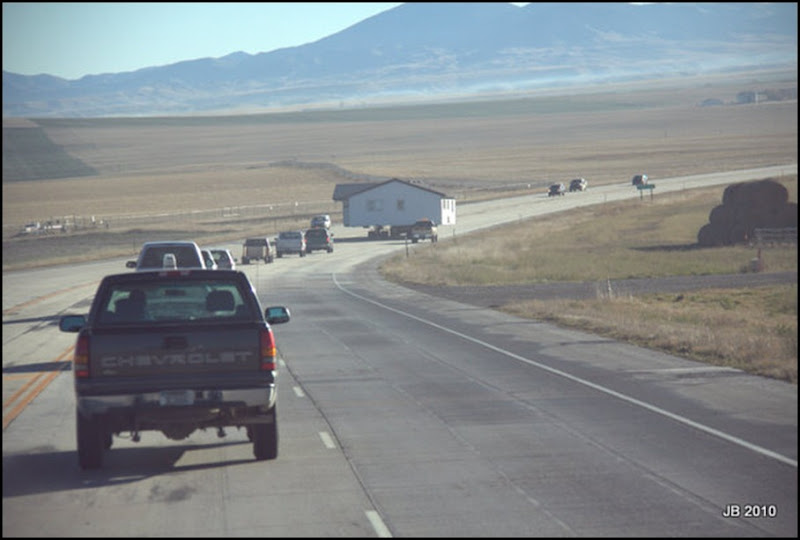 Now this fellow is actually bringing everything including the kitchen sink along on his trip. 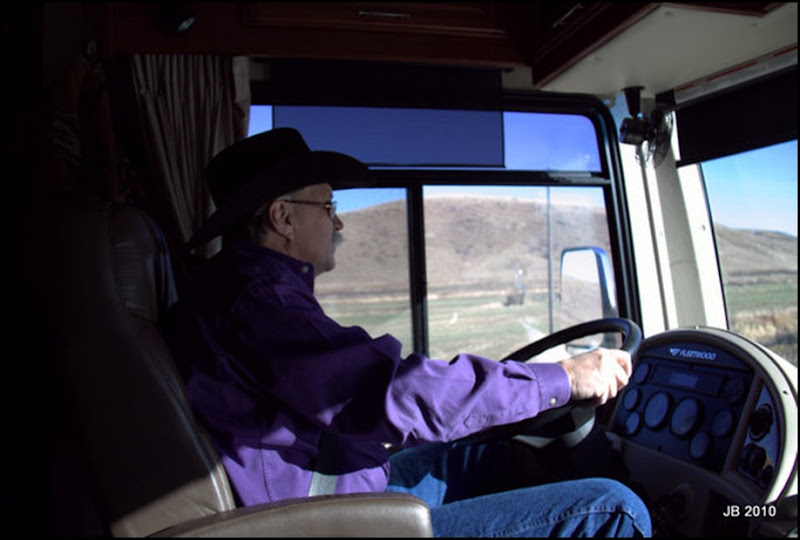 While I was driving Brenda was taking all the photos today, well except the sunrise and the next one.

A few weeks ago we read Mike and Janna’s blog and they had stopped in at Judith Gap for a “Black Raspberry” shake and highly recommended it. Well we slid into the parking lot of the Judith Gap Mercantile and jumped out to get a shake. Lo and behold they were out of Black Raspberry so I had Chocolate and Brenda had a Cherry, both were excellent. Because we had just crossed the border we were short on US cash so were on the lookout for a Cash Machine, but the girl in the Mercantile told us there were none in town but that they would take our Visa for the shakes. After she served us she fessed up that the competition down the street had one of those machines but she didn’t want to lose the customers just in case we didn’t come back. Great shakes, good business sense, but the parking lot wasn’t made for a 60 odd foot long outfit. To get out the exit we would have had to knock down a fence with the motorhome or drag the pickup over a power pole, so I had to unhook and turn everything around to get out of town. That took only a few minutes and we were off for our next date. 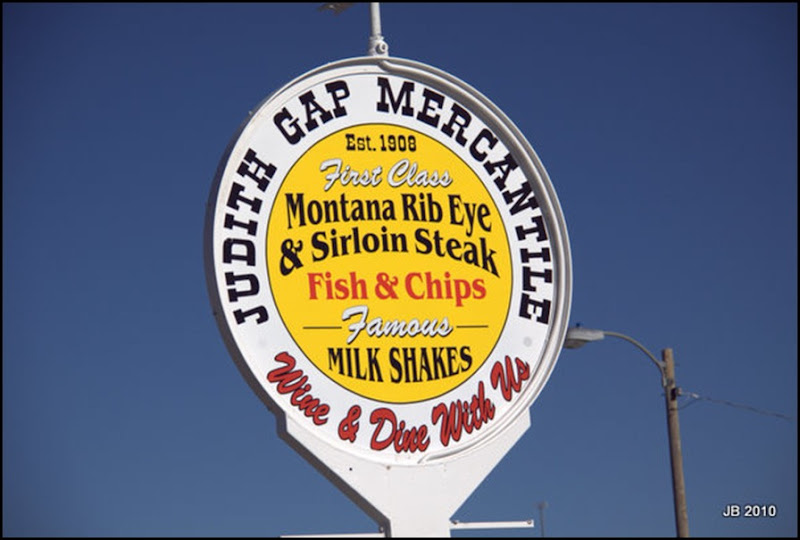 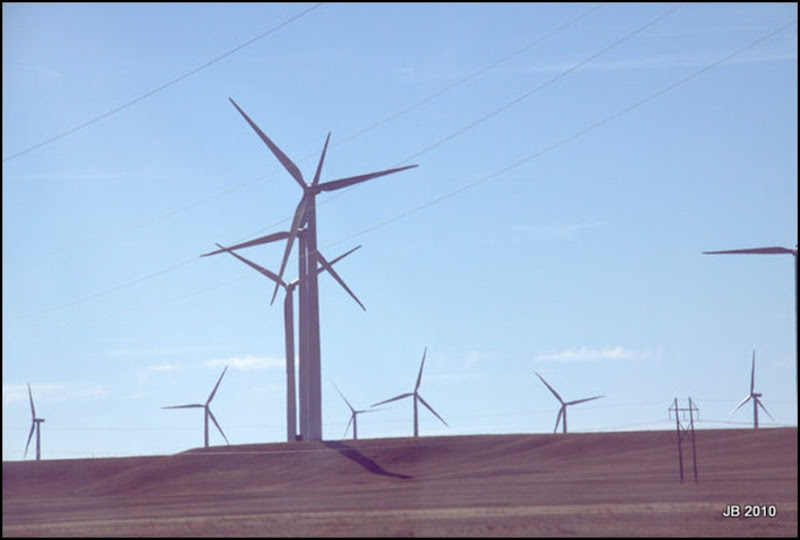 These windmills are here for a reason, we fought a head wind all the way south today and barely got over 7.5 miles per gallon.

We had made some tentative plans to stop and have a visit with Mike and Janna over the last week or so but didn’t have a number to contact them. Over the drive from the border we tried a few numbers we had in our phone looking for Rollie and Gina’s number which we were sure was in there somewhere. Well we never did get Rollie and Gina but we managed to get their son Thomas and Pat McFall. Pat had their number but lo and behold as Pat was giving us the number there on the other line was Janna leaving us a message. We finally hooked up so if you were in on our dialling frenzy thanks for all the bother. 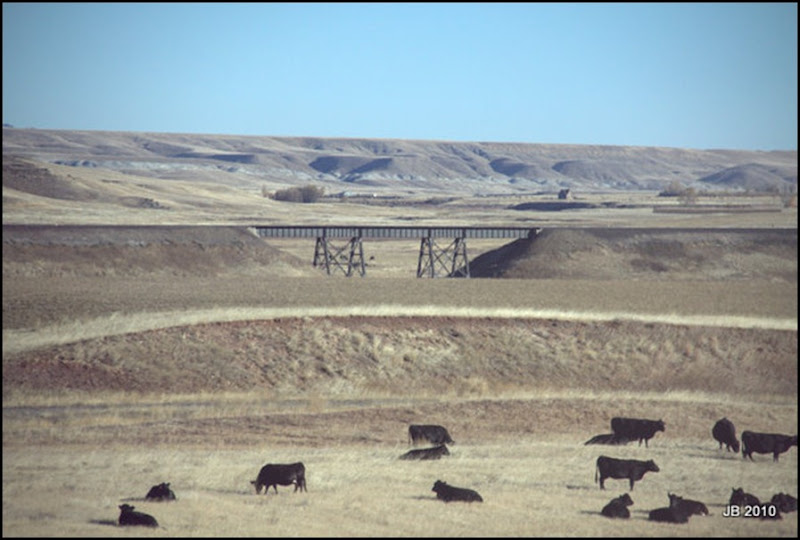 We met Mike and Janna in Big Timber whoever said there is no free lunch has never been into that part of Montana. Mike got stuck with the bill and the best we can do is promise to return the favour when and if they visit us back up in Canada sometime. We had a couple of hours of great conversation and it never fails to amaze me how when we meet folks for the first time it is like we have known them forever. A symptom of having read folks blog for a year or two. After some advice on where to stop from Janna, we headed off for Laurel, Montana and the new Wal-Mart there. 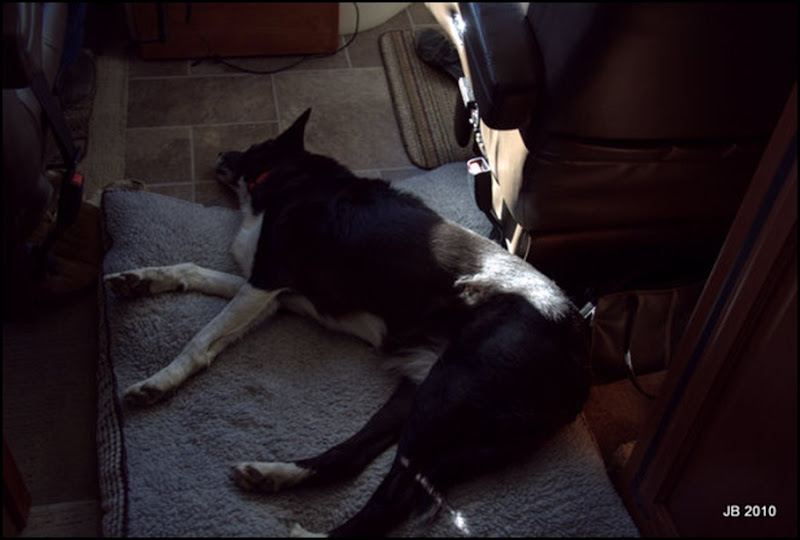 I’m thinking Meg is finding all this driving a little boring.

Once we found a corner of the lot that looked like we wouldn’t be in anyone's way, I headed off with Meg for a walk and Brenda headed in to reacquaint herself with the American Wal-Mart stores. Meg and I headed over to the railway and took a walk along there for a while. She found a rabbit or two to chase so had a good run without me having to go to far. While we were out there along came a security guy and told us that the guys in the control room were watching us on the surveillance camera and wondering what we were up to. Come on, a guy in a cowboy hat, and a dog walking along through a grassy area, aimlessly, wonder what they figured we were doing! I guess they figured we were going to jump a freight and head out of here for someplace else. The fellow told me that there were a lot of folks who do just that, and here I thought that riding the rails was a lost art. 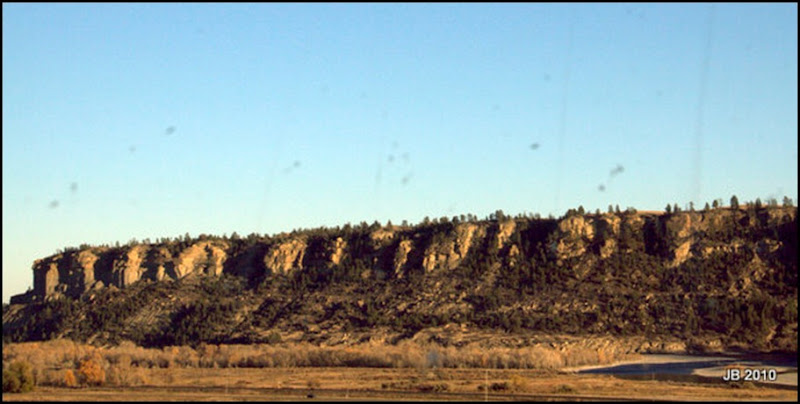 Some of the Escarpment along I-90 on the way into Laurel and of course the thousand bugs on our windshield. Coming from Alberta where the bugs have been gone for a month that is a good sign.

Once we got back from our stroll I headed into the Wal-Mart and as usual the greeter at the door was very helpful and welcomed me to the store with an assurance that they had brought the night stocking crew in early tonight just to keep the shelves full as Brenda whirled around the store. Well that may be stretching the truth a bit and I was surprised to see how much restraint she was showing. So much to my delight the Walton family probably did not move too much higher up Forbes richest family list, but I am sure those stocks Rod from Retired Rod had Loyce buy will still be a good investment this winter. As I write this she has run back in to pick up a FEW things she forgot so before I get to relaxed we will see how that goes.

Thanks for lunch Mike and Janna and we will look forward to seeing you down south once you get on the road.