Yesterday was a busy day and it was a little hard to get time to write the blog. Meg and I started off the morning with our usual 3 mile hike and then it was time to start visiting with our friends here at Cowtown. The girls decided that they needed a little retail therapy so they all climbed in Deb and Rod’s Edge and off they went. I don’t think they hit Wal-Mart but I know several other establishments were blessed with a pre-Thanksgiving uptick in sales. And once that initial load was stowed away they needed to run off and do a little grocery shopping so there were another bunch of bags brought back, along with some pizza’s for our dinner.

While all this re-provisioning was ongoing the men were involved in a roundtable discussion to resolve a lot of world issues and although we did move around as the sun dictated there was not a lot else accomplished. But we did manage to work up an appetite with all that chin waggin’ so the pizza was a welcome sight.

This morning after our walk we hosted a group breakfast here in our rig. Everyone brought something so we had waffles, eggs, bacon, english muffins and cinnamon muffins to stave off  the impending starvation. Once the physical plant was fed it was time for most of us guys to head off to Camping World to make sure we had all the necessary accoutrements to maintain our RV’s in the manner they have become accustomed to. I needed some new sewer hoses and surprise, surprise they had just what I was looking for there.

The girls headed to Wal-Mart so the Walton family is back on the Forbes Most Wealthy list again and we again acquired a half a dozen or more bags of stuff, to find places for in our now overstocked rig. Guess we will just have to get eating before the cupboards runneth over.

Tonight the girls decided that potluck appetizers was the meal for the evening so we all gathered down in Joe and Sheri’s rig to chow down. 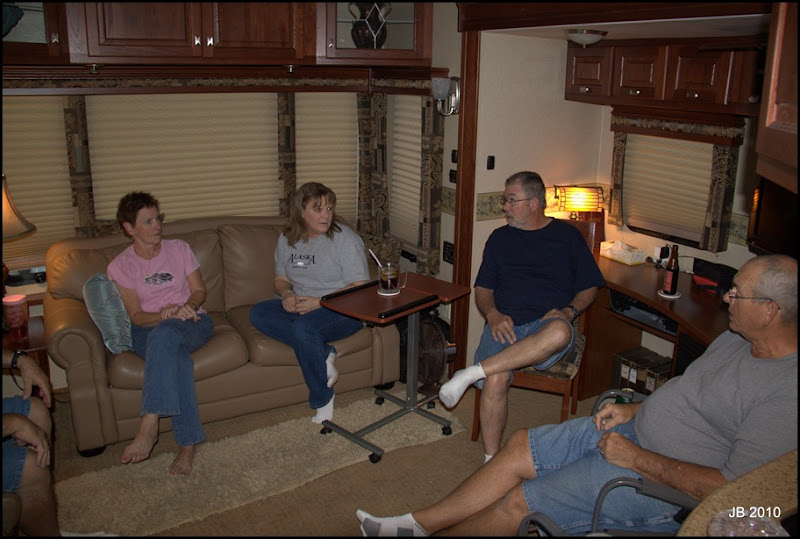 As usual we over ate, but it wasn’t long after dinner that the ladies decided they needed another bout of shopping to finish off the day. So off to that fine French store, Targét, they went. We put in a request for some Blue Bell ice cream but that seemed to have got forgotten in the heat of the moment so I guess we will have to go without. Not that we probably needed any more to eat anyway.

The men or more to the point Joe and Mark on behalf of the “men” looked after doing up the dishes and putting away the stuff after dinner although from what I could tell later it appeared that not much of it was in the right place. And just in case you were wondering I would have helped but was assigned to be the official photographer for this activity. 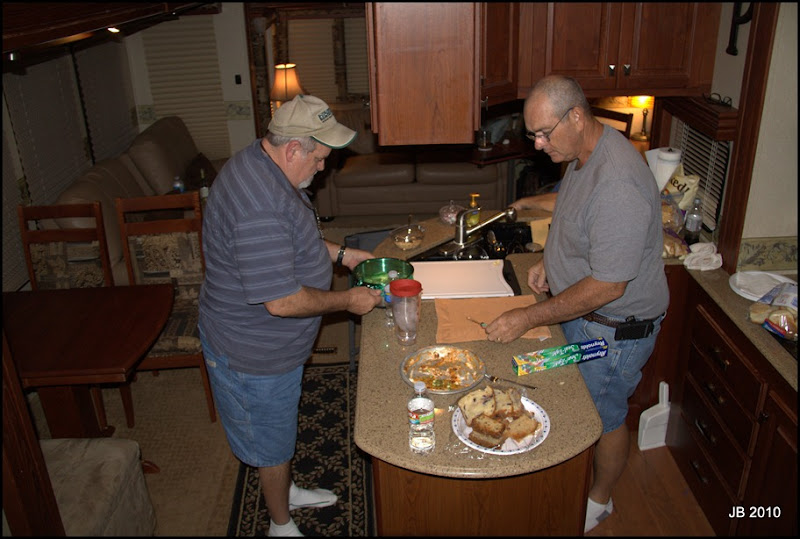 Another great day with great friends and we are looking forward to celebrating our second Thanksgiving this year with this great bunch tomorrow.