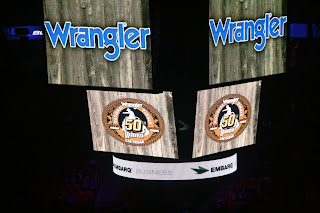 The rodeo is over. It was a great show and well worth the time and money. Well my time comes fairly cheap right now but it was worth the money anyway. It was the 50th Anniversary of the National Finals so that is a milestone. 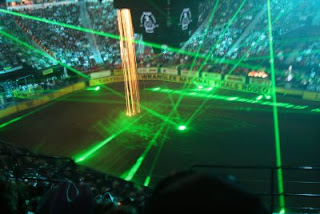 Pretty high tech show that opens with a laser light display. Tough to catch it in all its glory in a photograph but here is the best I could do. 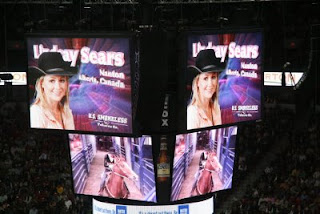 Barrel racer Lindsay Sears clinched her first world title after Round 8, so the only question remaining in that event was how much the Canadian would win and how high she would set the season earnings record bar. Sears, of Nanton, Alberta, finished the season as the sport''s first $300,000 barrel racer, earning $323,570 in 2008 while claiming the gold buckle. Her horse, Martha, was named AQHA Barrel Racing Horse of the Year, and Sears has been more than complimentary when talking about the talented horse."I''m very honored and very proud to be Canadian today, and it means a lot to get the first barrel racing world championship that we get to take home to Canada," said Sears, who finished third in the Wrangler NFR average. "It''s been such a surreal year this year. It''s unbelievable. I''m so thankful that I have such an awesome horse. Martha''s really the world champion. She deserves it, and I''m so proud of her."Sears won five of the 10 rounds in Las Vegas, including four in a row from Rounds 6-9, to pocket $139,002 at the Wrangler NFR. I stole the first part of this paragraph from the PRCA website and the report on the results for tonite. They said it better than I could. I think a lot of Canadians are pretty proud to have her bring home the World Championship buckle. 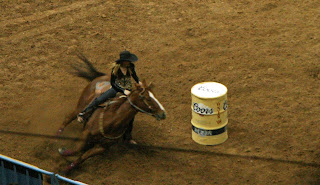 This is a shot of her making the turn on the first barrel tonight. Not her best run but, the best shot I got.

Earlier today we had some visitors, Wayne and Vel, from Caroline, Alberta, and Randy and Sue, from North Pole, Alaska. After a visit we went into the Circus Circus for lunch, the salad bar was great and the desert table was certainly well attended. As for the rest it wasn't particularly good but it filled the empty spot. 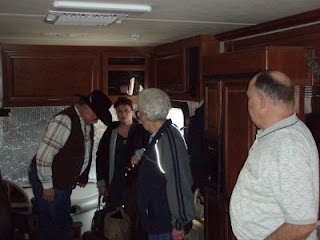 As for whats next, we are still figuring it out but it probably includes heading to more southern latitudes for some warmer weather.