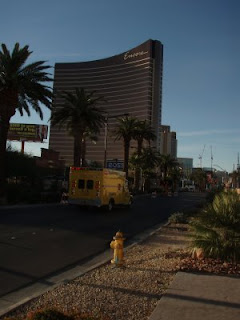 The other day when I went for my morning stroll I went down the strip to the Wynn. It is a beautiful hotel and the maintenance crew was hard at work keeping the pools sparkling. One of the fellows told me that they were the only property on the strip that had not laid off any workers in the downturn. The MGM Mirage group which owns the Circus Circus property where we are staying had plans to demolish most of the existing infrastructure and build a new casino and hotels and condo's but I am betting that all those plans are on hold until there is a turnaround in the economic situation. So it's tough, even in the gambling business. 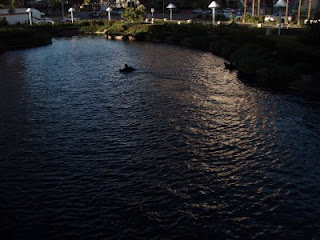 Here is a shot of the Grand Entry, with all the cowboys and cowgirls lined up at the start of the rodeo. 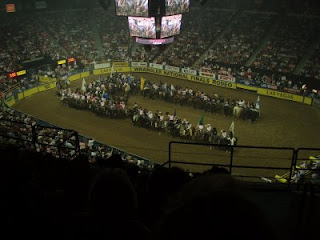 Traffic is certainly an issue heading over to the Thomas & Mack, but we just caught the shuttle bus here at the Circus Circus and it dropped us at the front door and picked us up after the rodeo and brought us back, no problem. 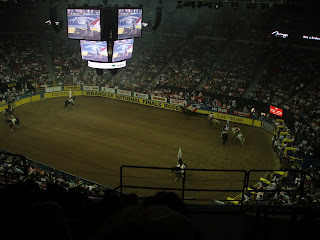 That red splotch, pardon me, proud banner with the red maple leaf, on the far side is the Canadian flag being brought in by Lindsay Sears for the Grand Entry.

It was a pretty good night for the Canadian competitors also. Curtis Cassidy won the Steer Wrestling and Lindsay Sears a Canadian cowgirl cleaned up at the barrel racing later in the evening. It looks like she is on her way to her first World Championship as she is about $64,000 ahead of her nearest competitor. Another cowboy who is married to a Canadian and makes his home down the road from us for at least half the year, Jeff Chapman, won the Tie Down Roping. The rest of our Canadian folks certainly made it competitive also. Tonight is Canada night at the Rodeo so we're hoping for another great showing. Love to see those Canucks take those good Yankee dollars back north with them!!
Today we are having lunch with some friends from Canada, Wayne and Val. He comes down to the rodeo every year and found the tickets for us this year. His usual haunts are in Inuvik in the Northwest Territories so even though it is in the 60's here it is a whole lot warmer than Inuvik at -30C.
Posted by JB at 10:11 AM