Sunset from the steps of our coach. 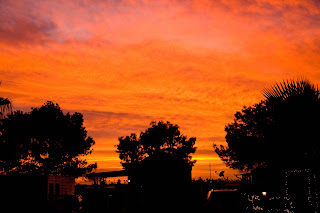 We met our neighbours here in the campground Ron and Brenda who are from Cutknife, Saskatchewan. They have been here for two years now and like the activities here in the CG. But like most of Canadians what they like best is the lack of snow and freezing temperatures.

Today we decided that we would get out and see a few of the places folks camp in the desert around Yuma. We had heard about them but never had been out to locate them exactly. We went out to Yuma Lakes where Ron and Eddy are camped. It is a spot right on the edge of a manmade lake. The other side of which has a commercial campground. Ron and Eddy have a view of the lake and no neighbours who are close, by campground standards. The road in and out is a little rough but nothing going slow wouldn't solve. After that we headed over to the Gravel Pit and scouted that out. We liked that spot a little better but apparently it is a little noiser as there is a gravel crusher working a half a mile away or so. Could even be a railroad track over there also.

While we were out wandering around we passed a "lettuce picking" operation. There were four of these outfits working in a field and they were cultivating and discing right behind them. This looks like back breaking work and is mostly done with Mexican labour. I'm thinking that if these are the illegals that the Border Patrol is working so hard to keep out, if and when they are successful the price of salad will be out of reach of most of us. I have a hard time imagining many Americans standing in line to do this work and am certainly glad that we don't grow lettuce at home so I can use that for an excuse to draw my pension rather than pick up a little part time work in the lettuce fields. 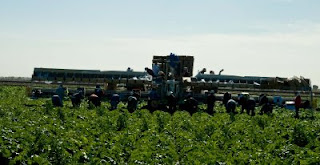 We also managed to fuel up the Jeep for 1.98/gallon for diesel, about $36 US$, not bad considering this summer when the dollar was at par we paid over $100 for a tankful at home. While we were out we also managed to restock our candy drawer at Walgreens and pick up a few Xmas decorations to make it seem more like Christmas.

Our friend Margaret's sister Linda and her guy Micky are trying to get to Yuma for Christmas from Lower Post up near the Yukon border. What with the weather up north that is proving to be a challenge. They left Whitehorse and made it to Vancouver and are now headed towards Calgary, where they hope to get a flight to Denver, then Los Angeles, to Phoenix and then hopefully on to Yuma. It might be quicker for them to catch a ride on the Christmas Eve sleigh.
Posted by JB at 4:13 PM