We left Lake Havasu this morning and headed for Vegas as planned. We are holing up in the RV Park at Arizona Charlies for a few days as our friends from the North Pole, Randy and Sue, are staying here. 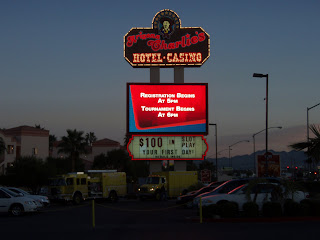 We got set up and then headed out to find some supper. We ended up at Tony Roma's for ribs, one of my favourite spots to eat after my own kitchen table. Turns out that the Tony's we stopped at is haunted or so our waitress Peebles was telling us. Yep, that's her real name too. Apparently her folks spent a lot of time in San Francisco in the 60's and 70's. Her uncle is Fred and her aunt is Wilma. Go Figure. She was telling about the strange things that happen around there restaurant, falling pictures, taps that turn themselves on, and sauce machines that turn themselves on without even being plugged in. Haunted it may be but the ribs were good whether or not a ghost had cooked them.
After we got back we hooked up with Randy and Sue and had a good visit. We originally met them in the KOA in Nashville last year and then crossed trails with them in Florida for the shuttle launch. We have kept in touch and enjoy visiting with them.
Posted by JB at 11:10 PM