Back in the Desert Again 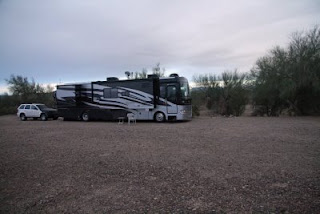 Well we are back in the desert again. It is nice to see the bright lights but nicer to leave them in the rearview mirror. We have a great site and a lot of space here, you don't get that in the Parks in the cities. We are north of Quartzsite about 3 miles and have nestled in behind some trees so even though it is a little windy we are not feeling it.

We had our rig into Las Vegas RV to complete some work we started last week and it was done early so we headed south. They were talking about 4 inches of snow around Vegas so we thought that was our cue to beat it. Sure enough as we headed south past Searchlight we had some snow falling. Although it stuck to the windshield the road stayed clear and we managed to get through without the tire chains. LOL Kinda like one of those July flurries back home. 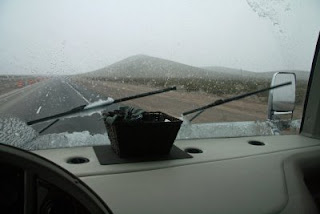 Yesterday we met Wayne and Vel and went to lunch at the Riviera Casino and ate in a restaurant called Kady's Coffeeshop. It was really just a coffee shop with coffee shop prices but the food was great. I had the pork chops, and Wayne and Vel had the T-Bone steaks, all excellent and Brenda had the hamburger and it was homemade and great. Nice to find a reasonably priced place with good food there as there are a lot of the other kind.

After lunch we filled the propane tank with some very expensive propane and left the KOA behind and spent the night at the Camping World. Couldn't get off the street to far but it looked OK when we got there. Little did we know there was a gravel haul that would be going by all night. Oh well that won't happen tonight. Camping World is a great place to meet people though, they usually have a customer lounge and most the folks waiting around in there are RVers and have a lot of interesting stories. Today we met a couple of Kiwi's named Clive and Gilly who are on the continent for the next 3 or 4 years to see it all. They have a new outfit and were getting a little warranty work done before heading out looking for the next interesting place. They should be in Canada next summer so maybe we'll cross their trails again.

The rodeo was great and it was nice seeing friends and even some family but it is good to be back in the sticks. Here is a shot of our new License Plate. Till next time 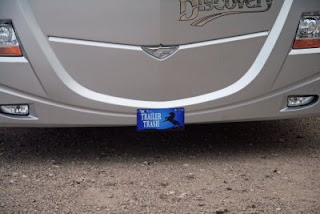