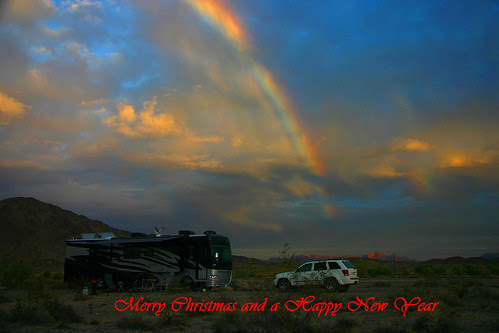 Folks on my email list will have to bear this photo one more time. It appears earlier in the blog also, without the text, but I thought it was a good symbol of our time and place in this season.

Early this morning I readied myself for an assault on the nearby Walmart. We needed a few last minute things and I don't think Brenda could bear the thought of Walmart on Christmas Eve. At 10:00AM I think I got the last parking spot in the very large parking lot. But once I got in the store I found it populated by folks whose intent was to look at every item before they made a decision, so with my short and specific list of items, and a pretty good knowledge of where to find them, I was able to work the perimeters of the store and get back to the checkout before the rush started there. All told it was only a half hour excursion. Must be a record for Christmas Eve shopping.

I came back to the Park and they were bagging sand and candles for some kind of luminary candle show that is a tradition here. The work party was supposed to start at 11:00 but when I got there it was almost over. It will be interesting to see the results as there is a white bag with sand and a candle in it placed every yard/metre or so all along the roadways. Not sure whose job it is to light all these but it will be a large undertaking.

Bill and Marg dropped by on the way to the airport to pick up her sister for an early Happy Hour and we are expecting Ron and Edie later this evening before we head out to see the Christmas Lights in Foothills a suburb of Yuma.
Posted by JB at 3:01 PM