Fulton Mansion and Other Things

Monday we just chilled at the campground except for that brief flurry of activity at the Laundromat in the morning. Monday evening we had a appetizers only meal with Dennis and Denice next door. The fact that there were only four of us didn't seem to restrict the quantity or certainly the quality of the appy's. We had veggie's and dip, mini hamburgers, jalapeno poppers, and a fruit plate for that final touch. The chance of a famine setting in around here is very slim, unlike the author. 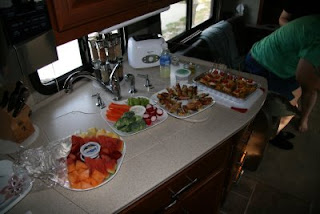 Tuesday we were out to see the Fulton Mansion. It was completed in 1877 and has been restored to it's former glory by the Texas government. It was a beautiful home when it was built and through a litte bit of good fortune and a lot of hard work by the volunteers it is once again a beautiful house furnished with a lot of the original furniture and many other period pieces that are similar if not identical to the original furnishings. Below is a shot of the Master Bedroom. 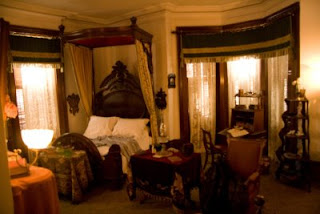 And this is a photo of the Den or Office that Mr. Fulton used to conduct his business. 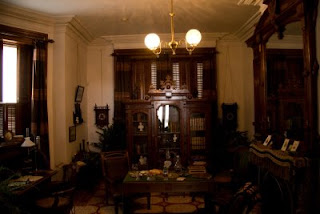 The other photo's are a little dark as they are trying to reduce the impact of flash photography on the colours but I took this shot before we were given our instructions for the tour. 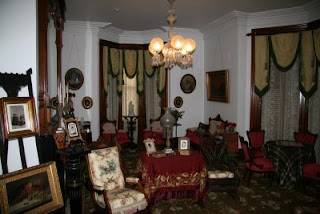 This is a shot of Brenda at the back stairs to the Mansion. 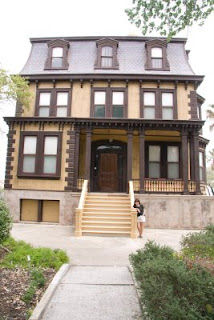 And here is a look at the front of the Fulton Mansion. For a lot better description on this home please click here. 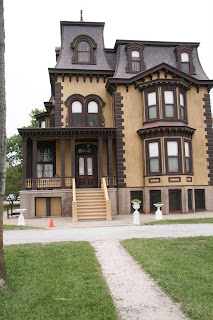 Today we ran out to the Aransas National Wildlife Refuge for a look around. This is the winter home of those most famous "Winter Texans" the Whooping Crane. I just have to add that like some other famous Canadians these fellows come down from Alberta to miss out on our Canadian winters. Their summer nesting area is on the border of Alberta and the NWT in our Wood Buffalo National Park. For a look at their Northern homeland click here. Below is a photograph of one of these rare creatures, yep that tiny white spot in the centre of the shot is a Whooping Crane and not just a discarded grocery bag stuck on a mop handle. Lot's of better shots on the links above and no Whoopers were disturbed to get them. 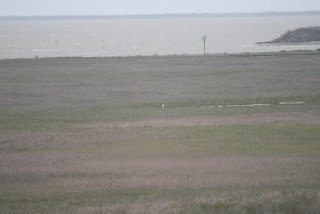 I've included the picture below as it explains a little bit about how these rare birds and Conoco Phillips are coexisting here in the Wildlife Refuge. The Cranes only use it for part of the year and Conoco is able to do their exploration and development work in the period while the birds have gone off to their summer home in Canada. 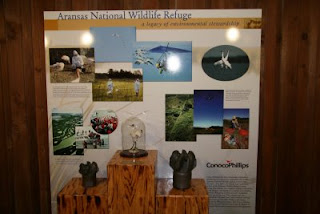