This morning we headed out early and picked up another 20 pounds of shrimp and a dozen crabs for Rollie and Gina to take back to Houston with them. While Gina and I removed the faces from the shrimp Rollie cooked the crab, or at least tried, one of them made a break for it and was halfway across the campground by the time he was recaptured. 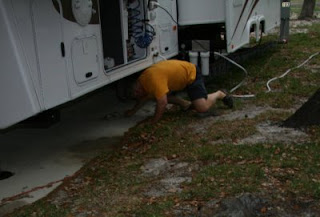 But eventually he met his destiny, as a snack for Gina, she does love her crab meat. 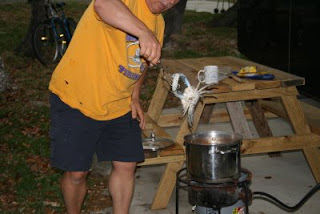 Once they got the crabs all cooked up we headed downtown for some Mexican food, but the Mexican folks obviously were home celebrating Easter as the restaurant was closed. We continued on to Alice Fay's restaurant and all took a break from our seafood binge and chowed down on Cheeseburgers. Now let me tell you these guys know how to make a Cheeseburger, it had all the trimmings, even some MYanaise, and must have been a half pound of meat at least all in a homemade hamburger patty and a great bun. Best bread we have eaten since we crossed the Medicine Line almost 6 months ago.

Once we got done gorging ourselves on those great Cheeseburgers we came back to the camp and Rollie and Gina proceeded to get their rig ready for travel. Once they were hooked up and had the pups loaded into the truck it was time to head out. Here is Angel wondering when they are going to get going and get done with all the goodbyes. 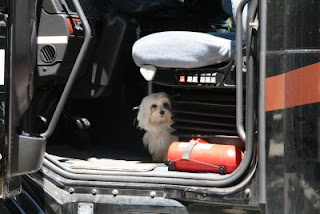 It is sad to see our friends head off but they have to get back to work and we will see them again next winter, till then travel safely and Vaya Con Dios. 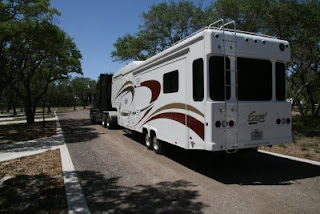 And here is a shot of a butterfly that Rollie and Gina had for Brenda. Anybody who knows Brenda knows she collects butterflies and this is her first Texas one. Thanks a bunch guys this means a lot to her. 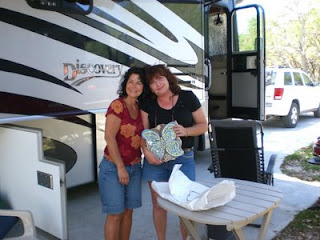