This morning we jumped in the truck and head out into the hills. I spent most of my working life in those hills doing one thing or another from hauling heavy stuff up them by hand to soaring over them with a helicopter. Almost every turn of the road brings back a memory and Brenda had to listen to a lot of them today. Not all, but a lot, gotta save some for next time I guess. We are lucky to live in a place where such spectacular country is commonplace and I couldn’t think of a day working out there that I didn’t appreciate the raw beauty. Things have changed a bit since then, more people, more oil and gas activity, and some logging, but time marches on and in a hundred years it will probably look different again.

Most of our trip was along what has been called the Forestry Trunk Road by locals since it was built back in the 50’s and 60’s. The link leads you to a Wikipedia page and although it gives you the general idea, the road actually begins down near Coleman in the Crowsnest Pass a couple of hundred kilometres south of where their entry puts it. Over the years since sometime in the 60’s I have driven this road end to end numerous times at all seasons of the year and although it can be dusty it is never boring. Today there was not much traffic and the road was in pretty good shape so we made good time heading north from Bearberry to the South Ram River. I’m saving the pictures from around the Ram River for tomorrow but along the way we passed Limestone Mountain off to the west as we transited what is called Corkscrew Mountain. A couple of weeks ago Ivan over at Roadtrip 2010 took a tour right up to the lookout on Limestone and did a great job of showing it up close. I can only take you as close as my camera will go as we were 5.73 miles off to the east. 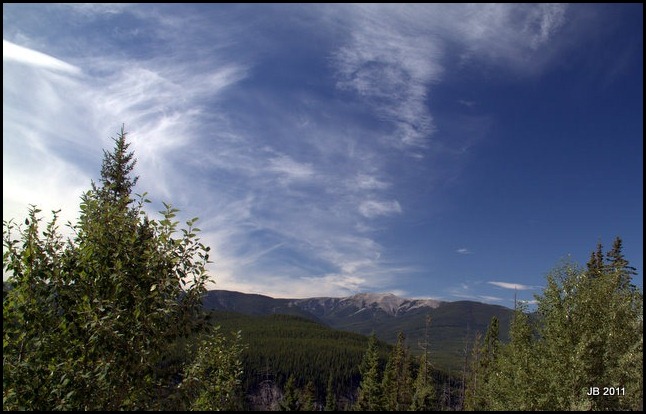 But with the big lense maybe we can get you in close enough to see the lookout cabin.

If you look close off to the left side of the photo you can see one of the power poles that supplies power to this lookout. From up there on a good day you can see the city of Calgary, 85 miles away off to the South East. Lots of good stories about Limestone Mountain but maybe the best was told by a helicopter pilot I had doing some work around there who came up on the backside of the mountain and spun around the cabin only to find the lady Fire Spotter making sure that she didn’t have any tan lines for her winter vacation. Gentleman that he was I am sure he averted his eyes quickly and reversed his flight path just as quickly….or maybe not. 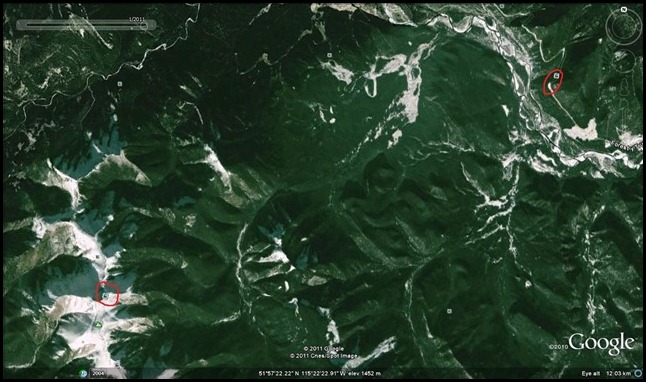 The image above I stole/borrowed from Google Earth and the circle to the left is the Lookout and the one to the right is where I took the photo from the road on Corkscrew Mountain. If you search “Limestone Mountain, Alberta” on Google Earth it will take you to the live shot, or do like Rod and blow up the shot to get the coordinates at the bottom, then you can zoom in and see some other photographers pictures from both places.