So for the first day of the year we went out looking for something to do. First I took the dish off the roof of the rig as we were going to get it painted at the Flea Market. Surprise, surprise, much to my chagrin and Brenda's delight it was closed. I can hardly imagine the fact that with all the folks down here on holidays they would take a day off during the holidays especially one that is only dedicated to recovering from hangovers, overeating and watching to much football. But Brenda warned me. Once we discovered it was closed we headed downtown looking for Gene's Chinese Restaurant. It is really called Jeannie Wah's Chinese & American Bistro but they are open today and we are thinking of trying them tonight as Brenda has a craving for Chinese. Well searching for them we came across Brownies Cafe and it looked like a good spot to have breakfast at, great eggs, hash brown's and bacon but as usual in the states the toast/bread leaves a little to be desired. 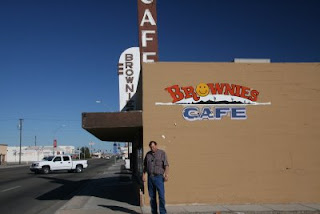 After breakfast we took a drive down to the Colorado River, the boundary between Arizona and California, and stopped in at the Quechan Indians Casino on the California side. Brenda says smokes are cheaper in California than Arizona. After that vice break we popped back across the river and visited the Yuma Territorial Prison State Park. It is the old prison and was active from about 1876 till 1909. Pretty much carved out of the hillside and it is hard to imagine that with the summer temperatures here it was a very hospitable place but apparently it had some modern features ahead of its time so the locals called it the Hotel. After it's time as a prison it served as a High School hence the name of the present day Yuma High School athletic teams "Criminals". Here is a shot of the grave yard not much more than a pile of rocks on each grave and there were reportedly 111 prisoners who died while incarcerated here. 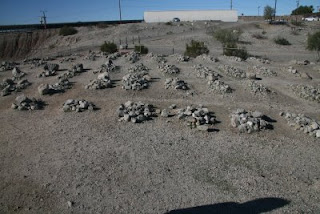 One of those prisoners was a fellow, wrongfully accused I'm sure, named John Brown who was murdered by his cellmate. 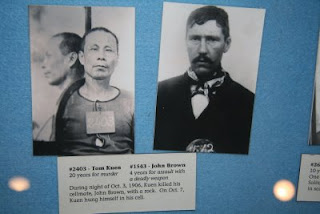 The cells here make a spot at Alcatraz look like a country club stay. 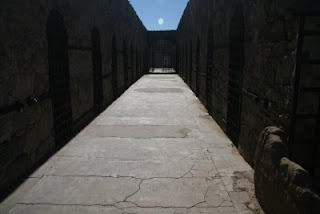 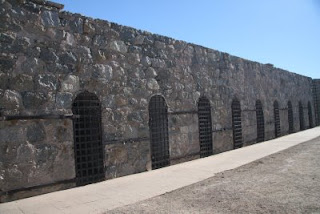 They tell us this door used to be a lot taller but what with all the movies being made here and the fact that the leading men were usually quite small they lowered it so that they would appear taller going in and out of this entrance. 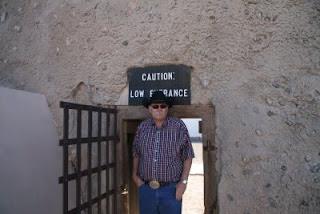 This is a view across the Colorado River at St. Thomas Mission on the Quechan Indian land in California 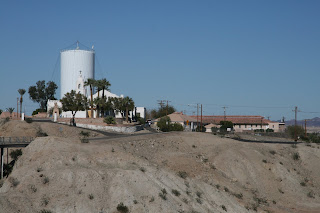