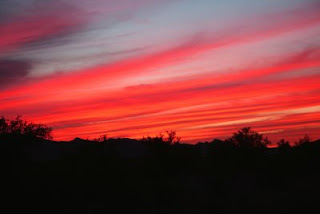 This afternoon when I phoned home to talk to my Dad he gave me some sad news. Apparently my family doctor had been stricken with a heart attack and passed away suddenly earlier in the week. Fred had been my physician for many years since taking over the family practice from his father when he retired. Dr. Fred's father, Dr. Joe Moriarty, had been the Brown family doctor since he came back from his stint in the Navy during the Second World War. Dr. Joe was the attending physician at my birth as well as the births of both of my sons and Fred helped bring my eldest grandaughter into the world. Needless to say we have had a long and for the most part healthy relationship under the stewardship of the Moriarty family. I can remember as a kid having Joe Moriarty doing house calls and certainly remember when I was in the hospital as a teenager hearing his voice echoing down the halls of the Holy Cross hospital making sure that his patients were the recipients of the very best care the staff there could manage. They were not pretentious men but were not afraid to call a spade a spade. I also recall half a dozen years ago when I had my heart attack, Dr. Fred's daily visits to interpret for me what the cardiologist were saying and what it would mean to me. I know that I still have some of the drawings that he would make to be certain that I understood everything. My heart goes out to Fred's family in these sad times and I just wanted to say thanks for all their family has done for mine over the years.

Today I wandered into Quartzsite to look around another section of the Flea Market. There are hordes of vendors around town for this event but it appears that they all get their stock from the same supplier. Boxes and boxes of tools, gloves, wire ends, hats, t-shirts and trinkets of all kinds but after a while you have to look up and reorientate yourself because it seems like you may have been walking in a very small circle. It wouldn't surprise me if the many booths are all owned by a very few folks as they all appear to have the same stuff for sale at exactly the same prices. I also ran out and had a visit with Bill and Marg, and Ron and Edy. They are parked out on Dome Rock Road in almost the same spot we were in in November. I have included a couple of photos taken out there to show the number of rigs surrounding them. 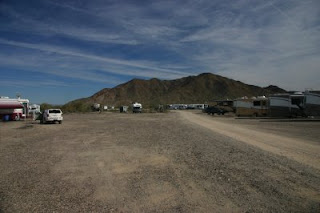 The shot below is from up at the Stone Cabin looking off to the NW across the Dome Rock Road 14 day area. 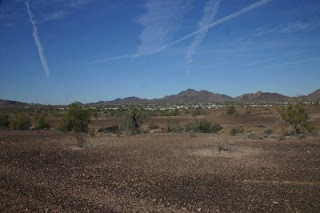