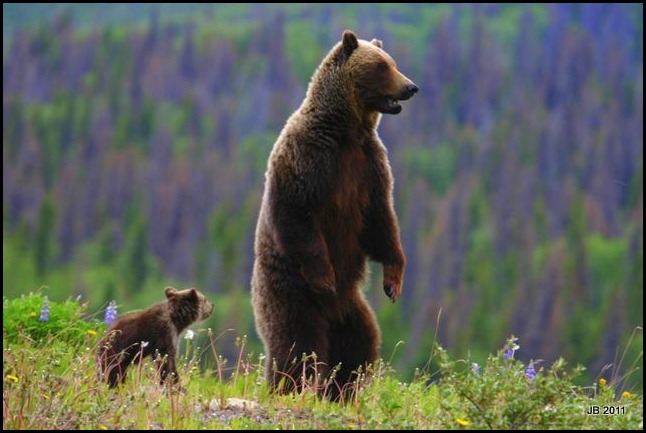 Today was another day of preparing for winter around Dogpound North. Oh by the way, the sow in the picture above was not here at Dogpound North but Brenda, my Dad, and I came upon her and her cub up in the Tatshenshini Park in the far north west corner of British Columbia. If you look close at this picture you can see that she has just finished nursing her young’un.

We are not planning on being here for a lot of winter but if you don’t do all the things that need to be done it leads to a lot of wondering and worrying about whether things are holding together while we are enjoying the warmer climate of Dogpound South. We had a little reminder the other day, we thought it was a cool rainy day and a fire in the fireplace would be a nice change. It had been a while since we had the fireplace lit so there was of course some concern on the part of others that it would be a problem. In this house the fireplace is what used to be called a Heatilator and it has in the past served as a heat source when needed. While it lit up fine, and the flue appeared to be clear and other than the smell of dust burning off all went well with the fireplace. We enjoyed the crackling fire and that special kind of heat that only wood gives you. But while the fireplace was burning the house was getting cooler and didn’t stabilize until it got done around 60F. Strange nobody told the furnace to take the day off but it picked this time for the thermocouple to take a vacation. So it was off to Home Depot first thing in the morning to pick one of those up. A curious thing about our furnace, although it was made right here in North America you needed to have hands about the size of a 4 year old to do a simple thing like changing a thermocouple. My hands are not the same size as a 4 year old so this was far from child’s play. My knuckles will heal though, I guess? But with that reminder out of the way I was off today to check the heated waterers we have around the yard to supply water to those of our ponies that are not lucky enough to be coming with us south.

That led me to find a leak in one waterer and a heat lamp bulb that needed to be changed out. We keep two waterers active so the stock can always find heated water somewhere even if one decides to pack it in. Our neighbour came today to load up his cattle and as the pasture he rents next door has no corrals he brings them into our place to load them out. Always surprises me how quiet and controlled his crew is when it comes to moving stock, when we had cattle here it seemed like there was always a lot of yelling, hollering, swearing and threatening needed to get things done. Along with the cattle leaving our son Paul brought his travel trailer out to put it away in the quonset hut for the winter. Good to see him and Lucas and Annika even though they were unable to stay long.

Brenda was busy, as usual, and this time it was windows that were the focus of her day. She has them just gleaming and they will be great for anybody trying to peak in while we are gone. And I guess the folks we have looking after the place will enjoy Brenda’s hard work.

Just in case you thought we were joking about that grizzly in the first picture nursing her cub here is the proof. 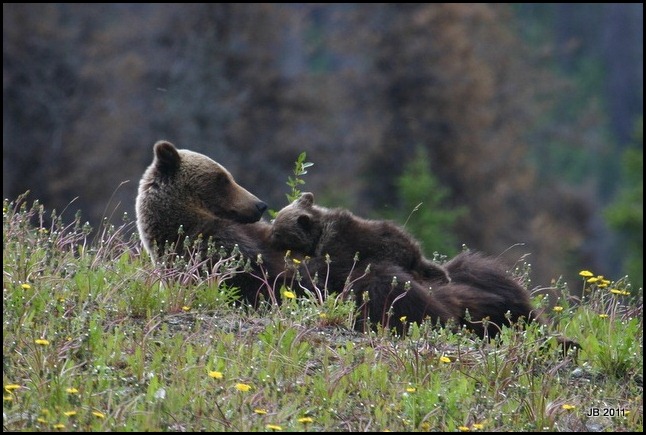