On the Trail again

This morning broke sunny and warm here at Dogpound South, near Maricopa, Arizona, and a little excitement in the community also. About 5AM I woke up when I heard some explosions in the distance. Last year when we were here in the late winter there were propane cannons scaring the birds off the newly seeded melon fields but it is the wrong time of year for that. After a momentary threat assessment my senses told me that these were a little way off and of no immediate concern to me, so I went back to sleep.

Once I got up and had my shower I got on the computer to see what was happening in the world and lo and behold Facebook and my friends in this area were all a twitter with the fact that there was a joint county, state, and federal task force serving warrants on some suspected drug folks here at Thunderbird Farms. There were a number of houses involved locally and the story has it that this was part of a nation wide drug sting that ran up into the Chicago area and maybe even across the border into Eastern Canada, or so my contacts tell me.

Well after making sure that our security detail below was on high alert. 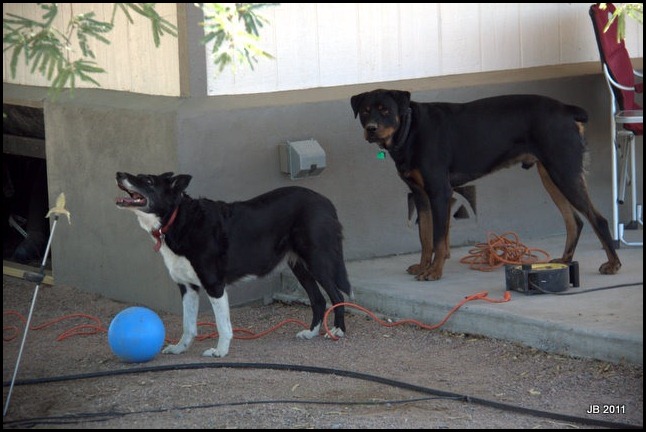 Brenda and I saddled up Blue and Willow and took a turn about the neighbourhood. Didn’t see much excitement except for the pit bull down the way coming out to warn us away from her place, but the law enforcement folks were all apparently busy a little north of us. Other than our ride this morning I never left the place, though Brenda did run into town for some supplies. Ray and Steve came by today to do a little plumbing work for us, and later in the day our garbage container was delivered, and we managed to fill the back of the delivery guys pickup with the garbage we have accumulated in the two short days we have been here.

After some comments yesterday I took some better pictures of the pens we set up yesterday. We have a large paddock at the back that is probably an acre and a half, a smaller paddock in front of that that may be a quarter acre and then two small pens that are twelve by thirty-two feet long. The sunshade is 60 feet long and 12 feet wide and covers a portion of all three areas. 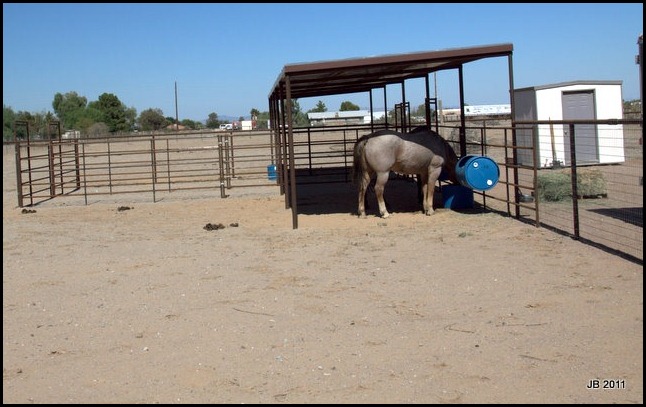 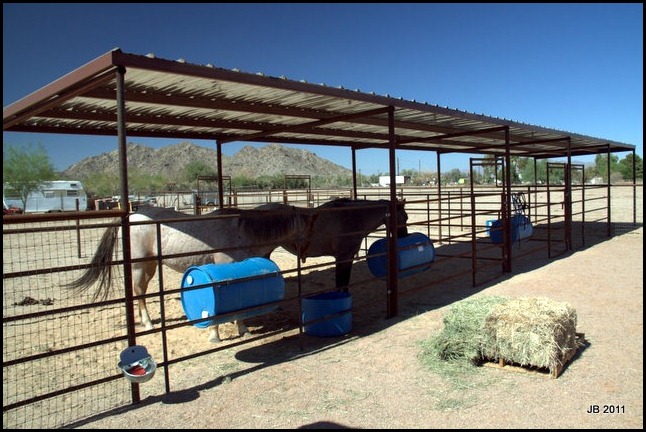 And just in case all you RV’ers out there are getting bored with all this sticks and bricks stuff I thought I would throw in a picture of what makes your boats all float and let you know that even though we aren’t rolling down the road as steadily as in the past we are still eating well. 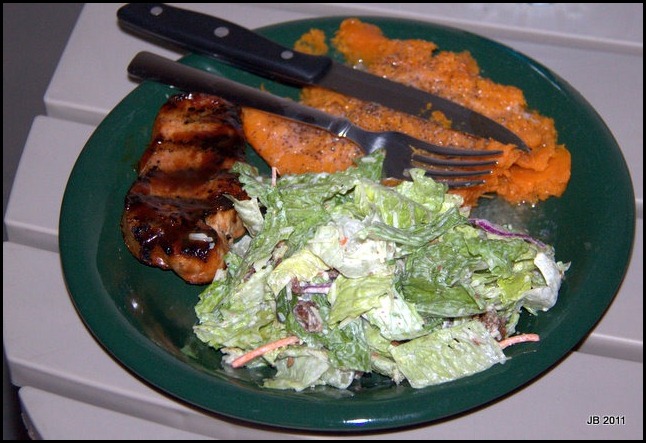 Baked Sweet Potato Janna, next thing you know we’ll be saying “All Y’all” come back now.