Sunday was day 2 at the Thunderbird Arena for an early morning clinic and then the Jackpot in the afternoon. Unlike yesterday Brenda was not wielding the camera so there will not be a preponderance of photo’s of me. I was helping out where needed with the cattle and then Blue and I spent the rest of the day just taking pictures. I like taking pictures but it was an education for Blue to stand still as he was my seat for the day. And a fidgety horse is not the best photo platform. But he came to work today and although he didn’t get a lot of exercise he did his part by not moving while we were taking the shots. Hard enough for me to get things in focus without some moving around on our end.

Now although they didn’t make any money I think that little spotted horse to the left was the best horse in the pen today. He was quick and knew his job, you can see him watching that cow while his rider, Dave is checking out the herd looking for the next one. In the picture below he was guarding the gate and you can see him piling on the brakes to keep from getting a roughing the stock penalty although that extra cow sneaking through did what he managed not to. His owner is a Canadian cowboy who helped out a stranger the first day we were here when I was looking for a trailer to go and pick up some panels for our horse setup here at Dogpound South. 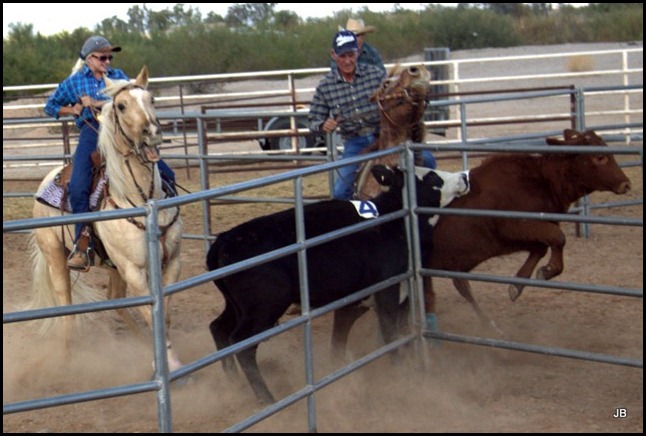 By the way having that #4 cow sneak by was nothing to be ashamed of that critter caused a lot of swearing and eliminated a lot of teams from the running. I think a lot of the riders here Sunday will be looking forward to meeting her at McDonalds someday.

I believe we ended up having somewhere around 26 teams entered in the Jackpot. You can enter yourself on as many as four teams each with a different partner and many of the folks here did that. That meant there was a little over $1000.00 in entry fees paid and the payout here was 60% so there was about $600.00 in prize money. The rest of the cash goes to pay for the cattle and then any left over will be plowed back into the arena. There is a lot of work that needs to be done to change this from an older good facility into a refurbished great one and the volunteers in our neighbourhood are determined to do just that.

I managed to get photos of every team so I am certain I have shots of the winners, BUT, my memory sometimes lets me down and if the following shots are not of those winners, my apologies and let me know and I will use the great editing software Microsoft supplies me with and change those photos.

As for placing's I am not so sure of them but as only one person changed from each team I am sure to get it at least half right. 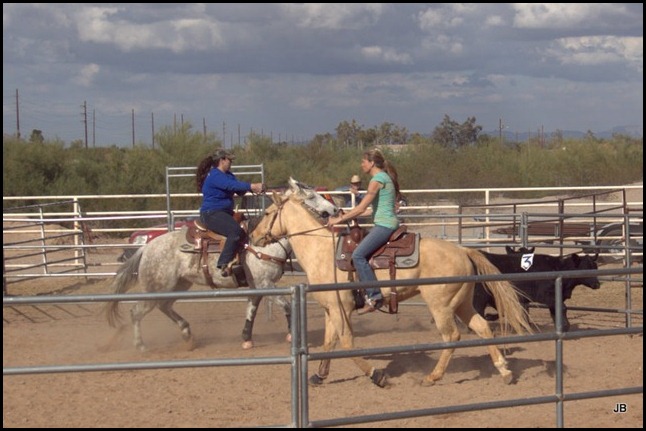 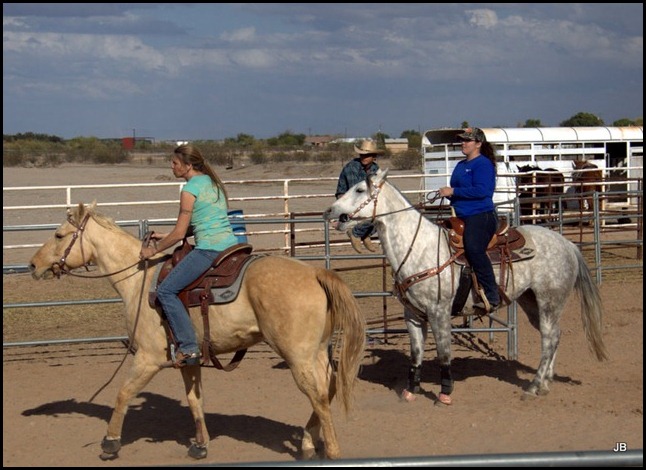 These two Arizona cowgirls were in the top two and the lady on the yellow horse was on both winning teams. 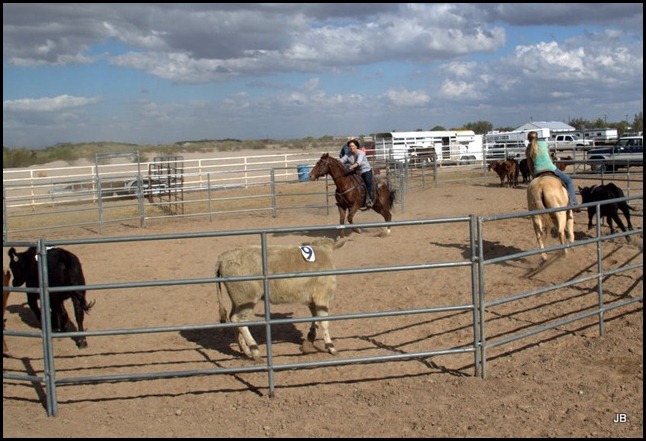 You can almost imagine Tricia, on the yellow horse, hollering to Yvonne, a Canadian cowgirl, “I got this one you get the next one. And it worked because they were the other top team. 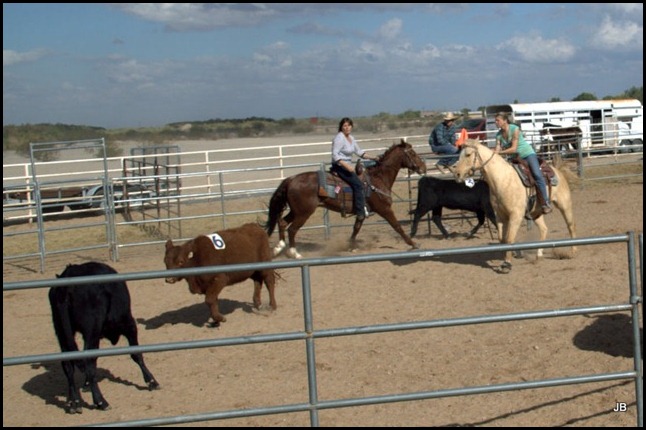 There is another shot of good horse taking care of moving the cow while the rider is surveying the herd looking for the next animal her partner is looking for.

Now there was side pool for the lower rated riders and our neighbours, Tanya and Candace, took that pot home. 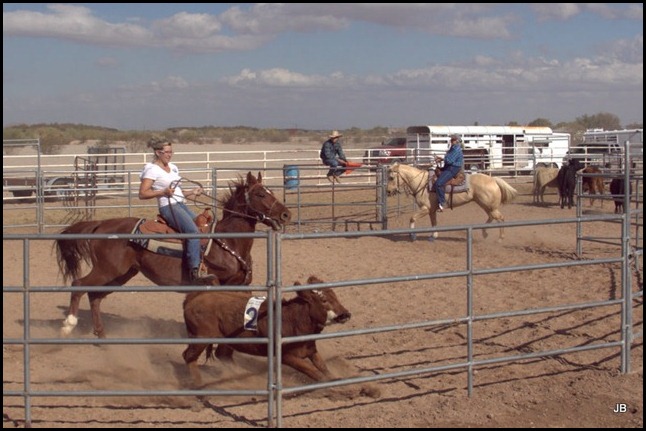 Just another shameless plug but Candace is another good Canadian cowgirl and the daughter of Dave seen earlier in this epistle. In case you are keeping score, yep the ladies won everything, and as the guy with the next best seat in house, to Gage, seen in the background with the flag, let me say the ladies did it with class, no curses, were uttered at least out loud, more than I can say for some of the men.

Brenda and I were talking this morning about just how at home we feel in this community and a large part of that is how great the folks here are at accepting strangers in their midst and welcoming us into every activity. Over the last two days Brenda and I and Blue managed to take a few over a thousand images and for anyone who wants to spend some time looking through them I will include a couple of links to the web albums that hold them.