Friday morning we finished packing up the LQ and made sure all the right tanks were empty and the other ones full, then loaded our two hounds and both of our horses as we were heading down Tombstone way to meet up with some folks from a group called the Arizona Back Country Riders to do a little riding in the Dragoon Mountains. It is about a three hour haul from here at Dogpound South to the camp just a dozen or so miles outside of Tombstone. We found our way with no problem (good directions Bill) and pulled into the site about 2:30PM and got ourselves set up. 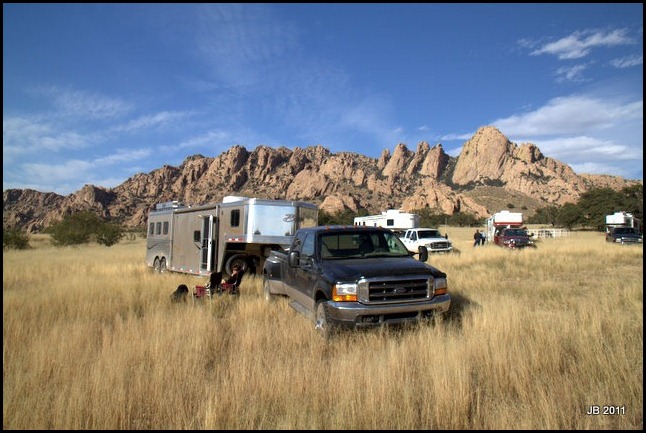 Some of the folks were keen to get riding and were saddled up and ready to go, we however opted to run into Tombstone with K and Theresa, and David and Linda, and Joe Carl and Adina(?) and wander the streets and then grab a bite to eat at Cafe Margarita and of course do a little shopping for the ladies. The others headed into Big Nose Kate's to do a little dancing after dinner but as Brenda and I are not the dancing type, or so she says about me, we headed back to camp to let the dogs out, yep it was us. 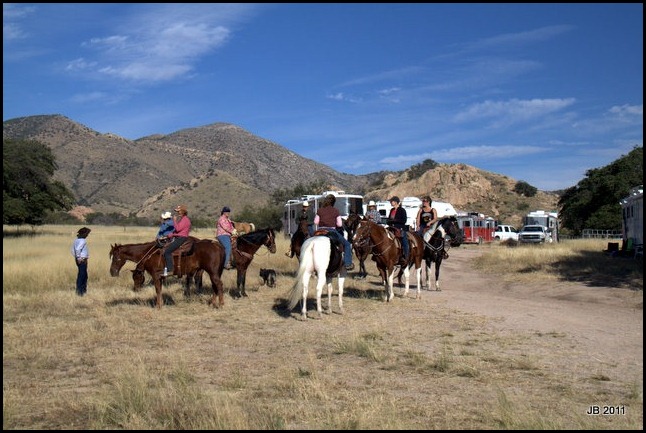 Well early to bed makes early to rise and we got up to a small change in the weather. 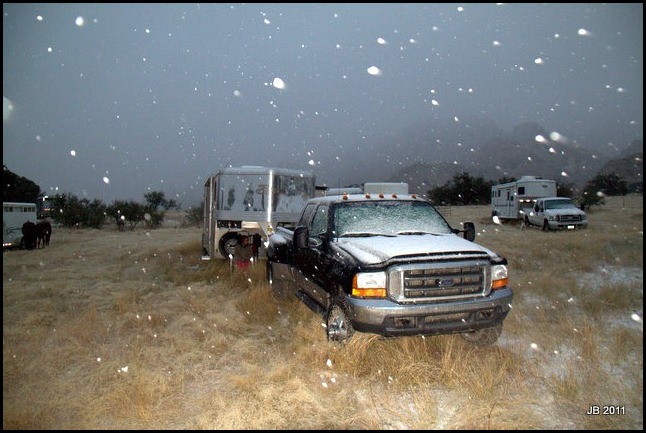 You betcha we are still in Arizona and that really is snow. As you can tell from the shot below there was a little wind through the night also. that is Joe Carls shower stall there standing on its head beside his tent. 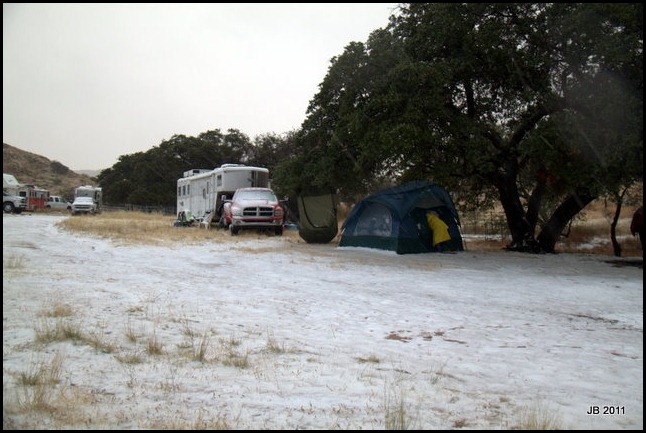 But a little snow never gets a cowboy down so we gave it a couple of hours while folks drank an extra cup of coffee or two and I slurped down my hot chocolate and then it was time to hit the trail. For those who missed the trip the weather was actually perfect for our ride, cool enough for the horses and just enough moisture to keep the dust down and not enough to make things slippery.

That fellow off by himself in the bottom right photo is K, Brenda and I had met him and his wife Theresa early in 2008 when we first came to this country looking for a place to ride. Took us a while but we made it back and are hoping to stay for many winters. K and I met through another website where we both post photographs from time to time. You can follow these links to K’s and my own Flickr sites if you are interested. It was his photo’s that drew us to this country to ride in the first place so we are hoping to trace his trails through the back country of Arizona.

Our ride on Saturday took us through and along the Dragoon Mountains to a place called Council Rocks, it was really just a jumble of boulders but at the base of them there was a natural amphitheatre where we left the horses and scrambled up to the top to set a spell and eat our lunch. There were some old old pictographs on the protected undersides of the boulders so you knew folks had been coming to this spot for thousands of years.

Now these new friends have a custom that is very similar to that we used to enjoy with our RV’ing friends and will continue to enjoy with whomever we are sharing our camps with. We gathered around the campfire back in camp and had a great potluck supper.  Those of you who I caught with your mouths full I apologize in advance but it just had to be as there was not much talking going on while the food was hot. 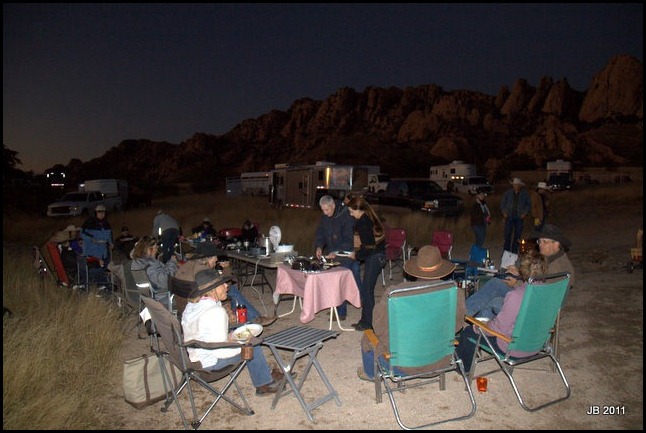 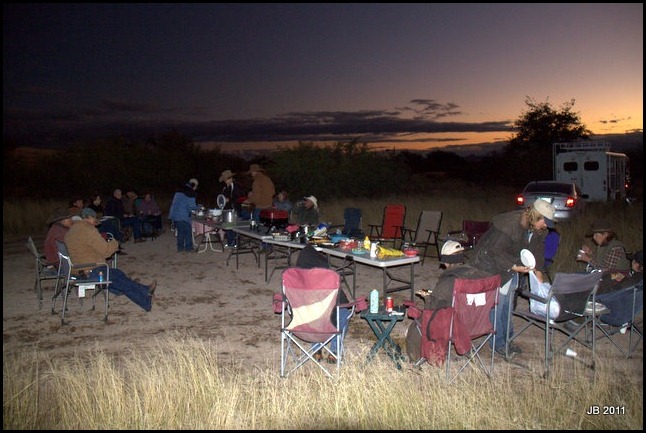 I am hear to tell you that there are just as many good cooks amongst these cowgirls as there are amongst those RV’ing folks we hung out with the last few years. As Nick Russell says "I am never going to be a thin man”. 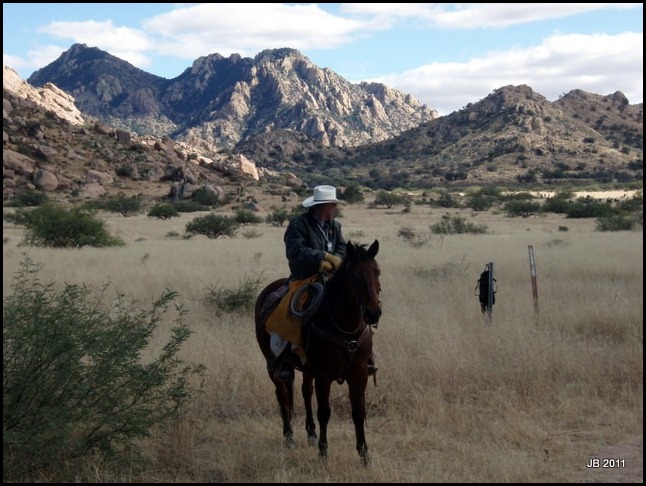 The picture above is our host and the leader of this expedition Bill, Brenda and I can’t thank him enough for sharing his country with us and our horses. 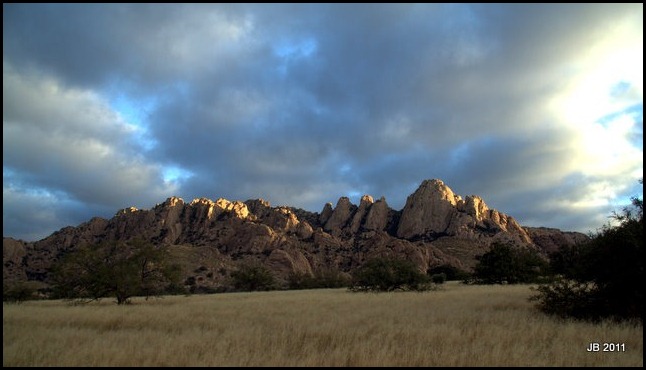 It is beautiful country and the pictures above were taken this morning and you’ll notice the snow is gone and the weather is back to normal. 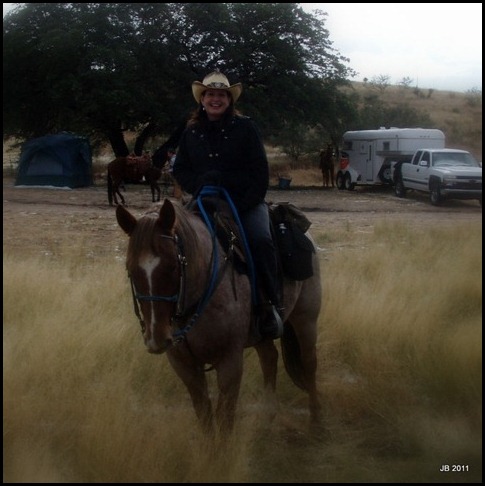 I will leave you with a link to our Cochise’s Stronghold Web Album that has more photos from this adventure.