This week we took a spin north of Cave Creek to meet up with a bunch of folks and their horses. The ride organizers were a group called the Lone Rangers and they are actually a singles riding group but they seemed to be hospitable to us married folks. We can ride with them whenever we like but I don’t think they want us as actual members in their club. There were some interesting folks in this bunch, some of whom were on our ride last week in the Dragoons as well.

Starting from the left in the brown ball cap is Dan, and going clockwise at the top in the brown cowboy hat to Joe, then Theresa and Eric with Theresa’s husband K, who is also a friend of mine on the Flickr website, and in is the centre is our long lost cousin, Ray Brown. Ray just retired on January 1st this year and is only 85 years young. He kept us in stitches most of the weekend and we can hardly wait to meet his wife, Georgia Brown.

We pulled into the campsite about mid day on Friday and got set up before many other folks were there. That meant that our horses were in the luxury suites and had a corral and were not tied to the trailer all weekend. That’s them down there with our truck on the lower right side of the trailhead and our LQ out in the centre with no truck. 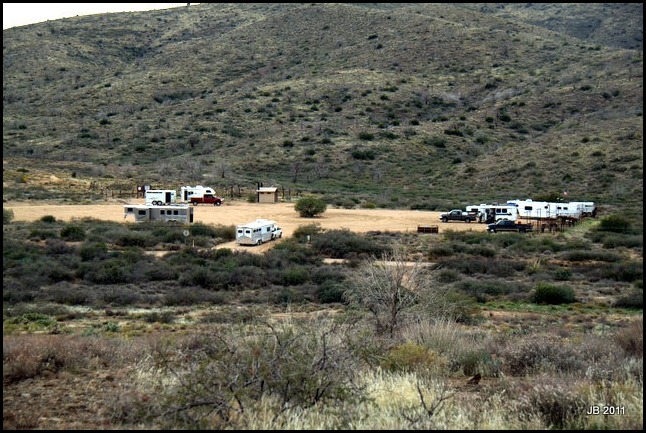 You won’t see any pictures of the ride here as it appears that my little Olympus point and shoot has given up the ghost. Lot’s of pictures but NONE in focus. Oh well it is embossed on my memory. Sorry about your luck though!

Once we got back to camp it was time for that time honoured tradition, POTLUCK, and as usual there were twenty odd folks there and each and every one brought enough food to feed 20 odd folks. Brenda contributed linguine and meat sauce along with a salad and a chocolate cherry cake. Needless to say there were glucose monitors all over the camp setting off their alarms all night.

It rained pretty steadily through the night and all morning as we packed up to head home. If this keeps up the desert should once again be a beautiful green this winter. We got back to Dogpound South in the early afternoon and got everything unloaded and set back up for the next trip. 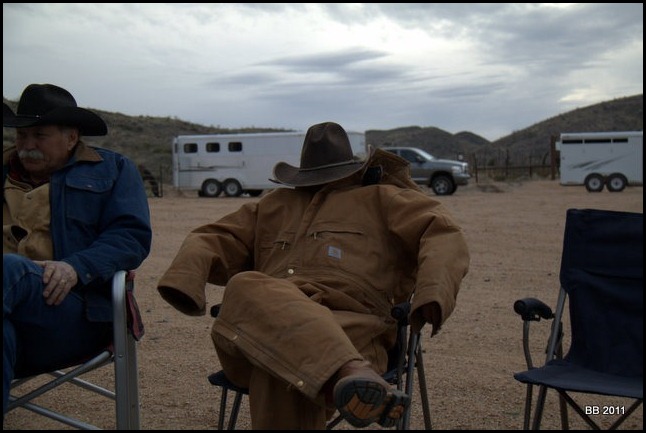 Not often I get a guy sitting beside me that makes me look good, but that is Larry, ‘er I mean Joe, our friend from Wyoming inhabiting those coveralls.

A couple of pics I stole from our friends K’s collection to quench Caron’s thirst for shots of Willow. 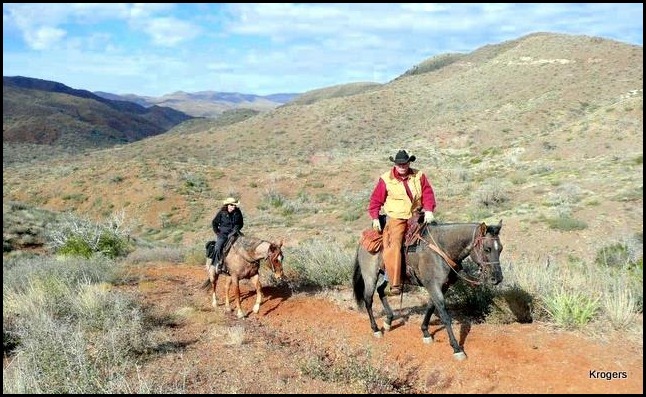 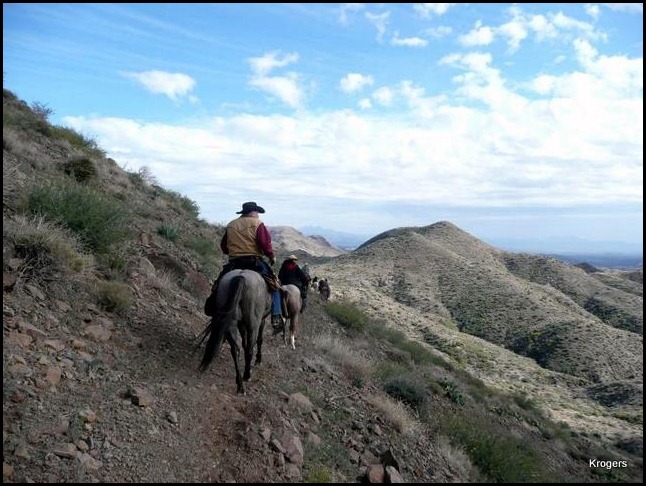