This morning as the day began it was apparent that our internet was not working correctly. As much as we like to be off in the desert in a remote location we still like to be able to get in touch with our families and friends and the internet is the means by which we do that. We carry two aircards down here one on the Sprint network and another on Verizon, although both are with third party providers. That covers us most anywhere we go with pretty good service. This morning it was our Cradlepoint router that was not working correctly. Luckily, for us, we bought it from the 3G Store and their service is just as good three years later as it was when we first started talking to them about the equipment we might need. I gave them a call this morning and one of their tech support fellows spent about 45 minutes walking me through a couple of fixes that needed to be done. In a nutshell we reset the defaults to the factory settings and uploaded the latest firmware versions and then he helped me get it all back to the way we like it to operate. Success we are back on the net.

Once that was done it was time for some of that great jam that Janna left with us last night. It was even better than I expected, I will have to get my name on the list for a pail of this stuff next year, lol.

The sun is blazing down and rather than head right out on our walk it seemed like it would be a good idea to get our solar system deployed and making power for us. I gathered up the cleaning stuff and the support brackets and scrambled up onto the roof. Once I cleaned all the panels our power production went up 10% and then once I got the panels all lifted off the roof and angled towards the horizon the production skyrocketed up another 90%. Makes a huge difference in the winter when the sun is so low in the sky to get those panels pointed more directly at it.

Then it was off on Meg and my stroll through the desert surrounding our site. I walked a four mile circle around our two rigs and although I will admit in a couple of spots I could see other outfits off in the distance there were none within that perimeter. Which probably explains the deafening silence last night and the total darkness. It sure is good to be back in the desert. We saw a lot of country and never another person.

We got back and it was time to kick back and relax and get some reading done. I am in the middle of George W. Bush’s Decision Points book and it is an interesting read and gives another perspective on his presidency than the one the press would have us believe. I am sure that the reality lies somewhere in the middle but I will give George W. the benefit of the doubt as in my experience the press is usually looking for some sensationalized bunk to sell media time rather than telling it like it is. That’s the way this reporter see’s it anyway…..lol. 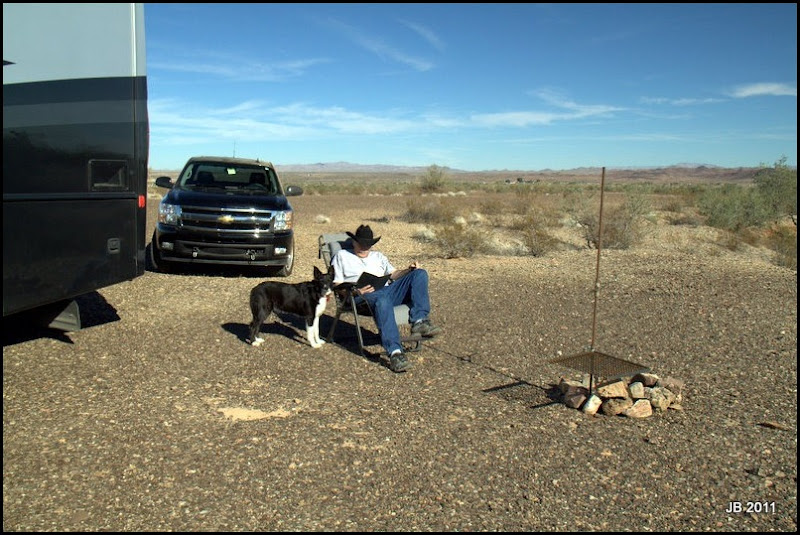 It is a tough life but someone has to do it so why not me?