Back to the Ranch

Friday morning we got our horse trailer hooked up, loaded Blue and Rosie, then Brenda, Claire, Meg and finally their intrepid driver and off we went. First stop was the dump station in Cremona, no point in hauling any more than we had to, then we headed for the Flying J in Red Deer. We last refueled on the return from Alliance a couple of weeks ago so it took us awhile and the shares of both Flying J and Shell should have taken a jump after we took on a load of fuel.

We are headed to the Buffalo Creek Ranch for a celebration of my Uncle Brent’s wedding last October. Might take our family awhile but we eventually will use any excuse for a party. Actually he and his new wife, Helen, ran off to Indio for the winter so we thought we should wait till the weather was better once they returned. 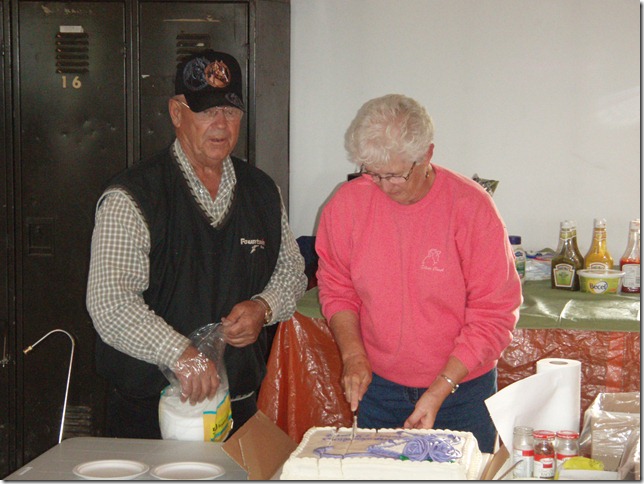 The weather was pretty good all weekend although we did get enough showers to keep any dust from being an issue. 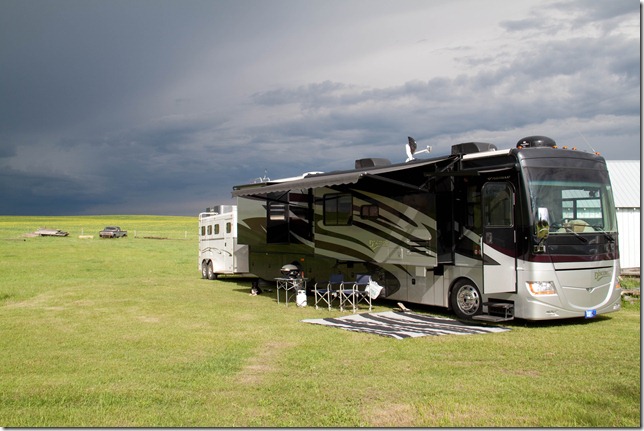 As usual the Macnab’s fed us well with cousin Randy functioning as the Head Chef. 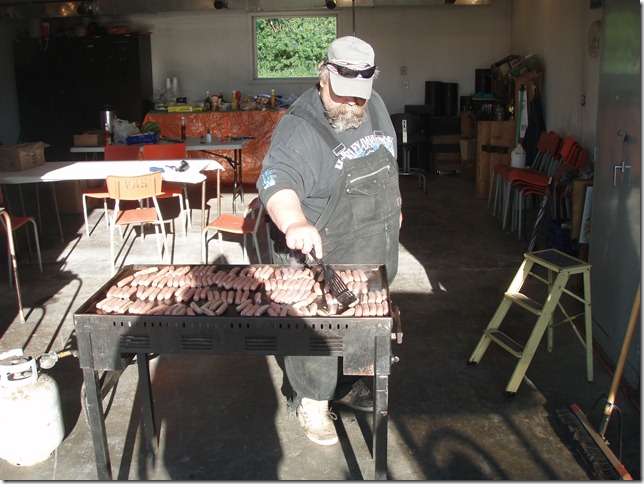 That’s him with about twenty pounds of breakfast sausage cooking early Saturday morning. The sausage was supplied by Meatco Sales in Wainwright and if you are ever in the neighbourhood I would stop by and load up on those sausages they were great. Now if you want the cook you will have to travel up to Fort McMurray as Randy has a day job at the Fountain Tire up there.

Once we got done with the sausages, bacon and blueberry pancakes that Randy cooked up we saddled up our horses and took a jaunt down into the Buffalo Creek coulee. It was as usual a beautiful ride with good company. 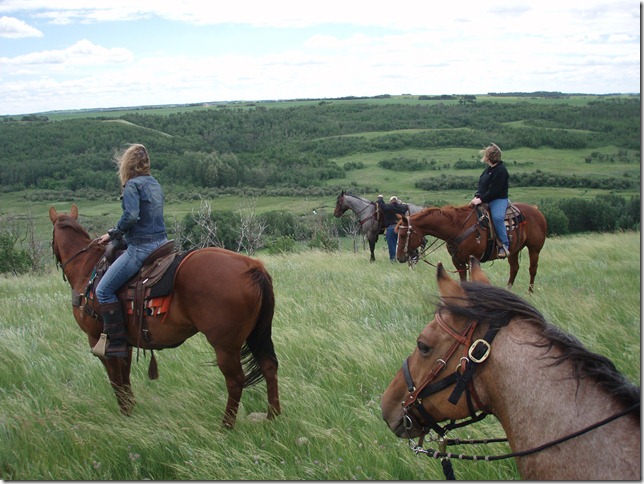 On the ground in the background is my cousin Mike, another cousins daughter, Jacki and then the closest rider is my sister-in-law Trish. The horse in the foreground is Brenda’s Rosie. All the other horse’s are Mike’s and he travels extensively around the province competing in Team Roping events with the two sorrels and the roan he is mounting is a new prospect he is working on, when he is not busy managing the Fountain Tire in Valleyview, Alberta. Starting to notice a theme here, yep, my cousins are in the Tire business, and the youngest one Blair, who somehow avoided being captured by the camera this year is just about to retire from Fountain Tire in Fort McMurray and move back to the Buffalo Creek Ranch. But if you pop over to my blog about last years Reunion you can catch a couple of shots of Blair and maybe get the idea that this group are really RV’ers at heart, we seem to always be eating when we get together.

My brother Brent and his wife Trish have recently joined the ranks of the RVing masses after many years of being boaters. They have acquire a new Triple E rig that fits the bill for them pretty good. 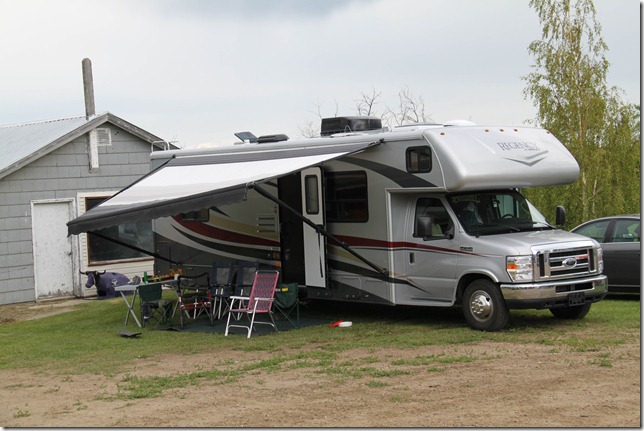 Now the kids were kept entertained all weekend and made many trips to the coulee with one or another of the adults in some of the many ATV’s that were on site. One of the best lines was my nephew, Christopher, asking my brother, Brent, “Dad did you go down to the coulee alot with the ATV’s when you were a kid?” Well I think the only ATV’s we had were a quarter ton jeep or a horse and I don’t think Brent was lucky enough to get to take the Jeep and the horse he rode the most was Shank’s Mare. Tough for the kids to believe that we didn’t have all these cool toys then, but we did have fun in the coulee anyway. Here they are coming back from their last coulee adventure. 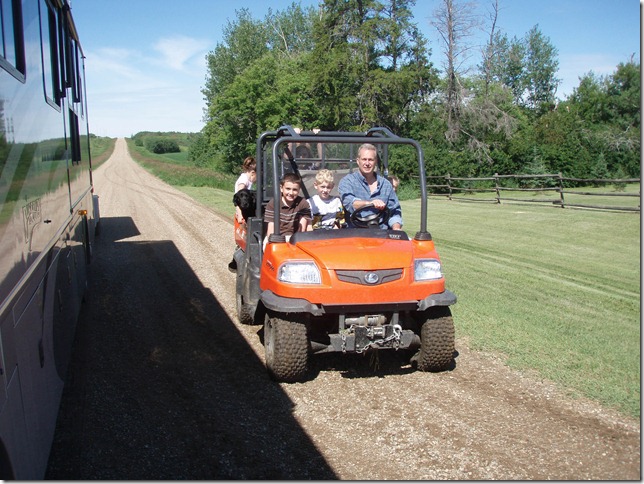 Here we are loaded up and ready to go once the kids get back. 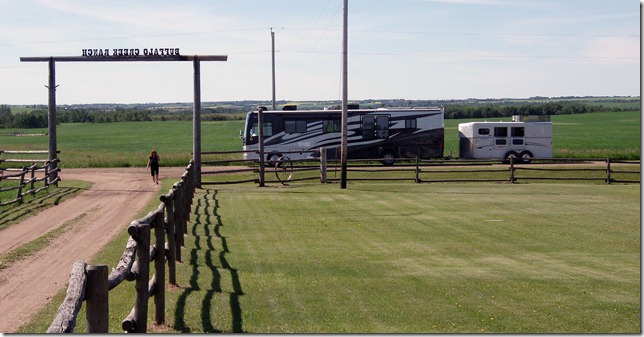 We did attend to one other thing while we were up in the neighbourhood. Those long term readers who have been following us for a while will remember that some of my brother Kelly’s ashes are in the Auburndale cemetery along with my Grandparents and Uncle Brent and I got his headstone ready to mount down there at the cemetery. Here is Uncle Brent working away on that project in his workshop. 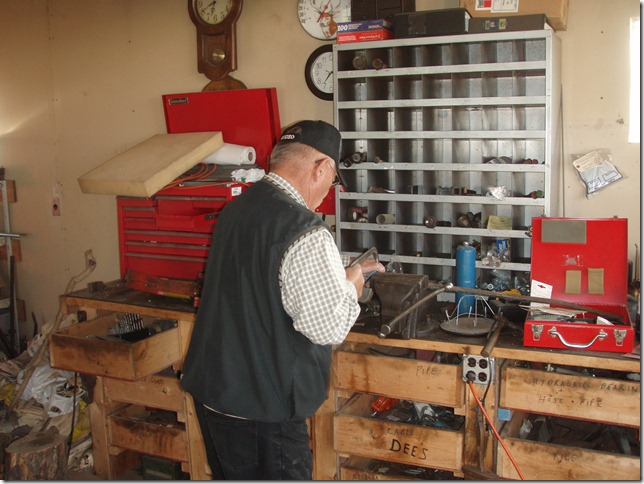 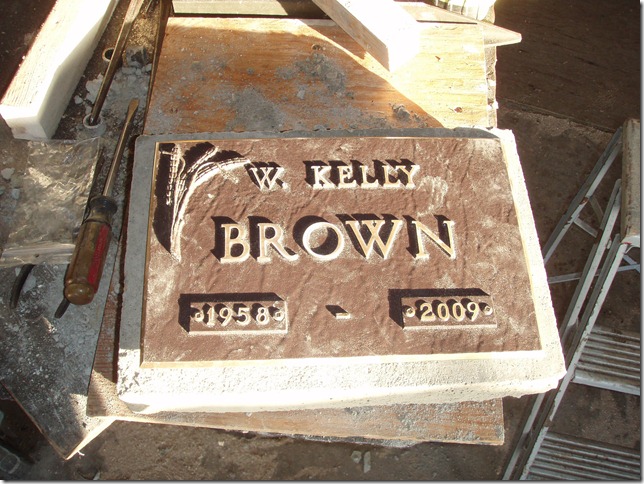 And here is Kelly’s monument along with my grandparents. 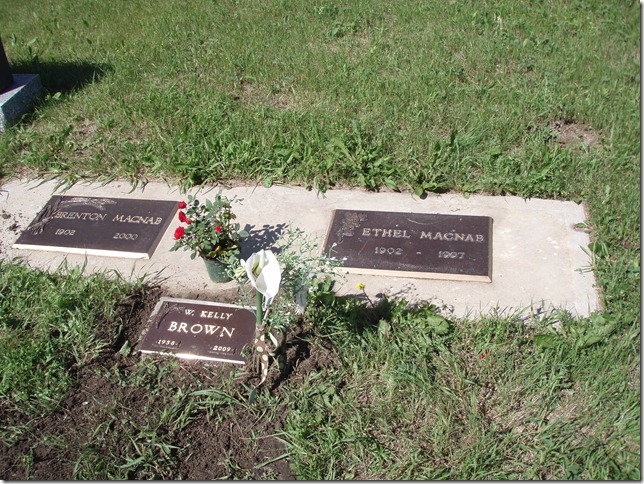 And once again we put the Buffalo Creek Ranch in our rearview mirror and headed down the road to Dogpound. 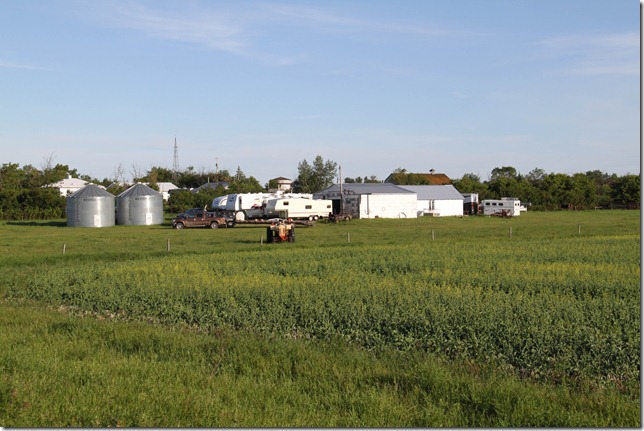