Here is the view we had from our seats at breakfast. We ate at a place called Gilda's out on the wharf in downtown Santa Cruz. 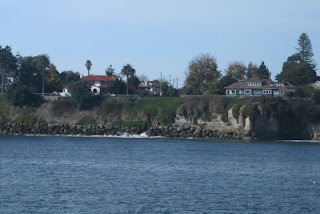 The breakfast was easily as good as the view also. I had the Fisherman's Wharf special, hotcakes, 2 eggs, bacon and sausage and it was all scrumptious. Brenda had the Chicken Fried Steak and it made mine look like the cholesterol watchers special. Tasted good to from all reports.

After that we wandered around to the point just left of the original picture and watched the surfers at play. Sure was a lot of folks there for a Wednesday morning, beats working I guess. Some cute guys down here Carley, you gotta blow off the office in San Ramon and head down here for a look. 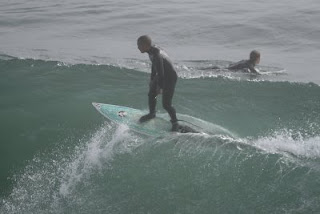 After that we wandered down the road a little ways to pick up some stuff Brenda wanted at a local mall and then started back for the campsite. Our Jeep is being worked on this morning so hopefully that is going well. While it is incapacitated we have rented a Jeep Patriot from the dealer to run around in. Boy is it a plain Jane outfit. First time since I turned in my company truck a couple of years ago that I have seen a vehicle with roll up windows and manual door locks. You sure get used to the nicer things in life in a hurry.

On the way back we stopped near Moss Landing at the Harbour and had a look at the gathering of sea lions here on the dock. There were literally hundreds of them all stacked up enjoying the sunshine. We were told that the Orcas are ranging up and down the coast so the sea lions are taking refuge in the harbours. There is also a large power plant here and that means there are a lot of fish around the outlets enjoying the warmer waters so the sea lions have ample groceries to survive the siege. I am sure the local fishing boats are just loving having them around all the time. 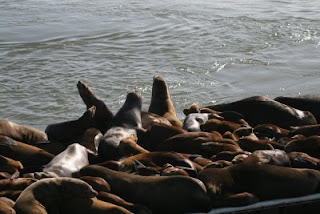 There are also a few rafts of sea otters hanging out here and the fellow below was just one of many we have seen. 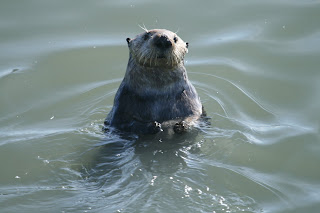 Well here's hoping that the draft of this will stay safe while I am off to pick up the Jeep, after I get that done I will return and let all of you know what is up with the latest calamity we have experienced.
The Jeep is home, apparently there was a wheel speed sensor on the right front wheel that came loose and wore through the wires connecting it to the computer. That told the machine that one wheel was not turning and it disabled the traction control system and the ABS braking system, nothing serious but a lot of lights lit up. Hopefully that will be all for the next little while.
Posted by JB at 3:13 PM