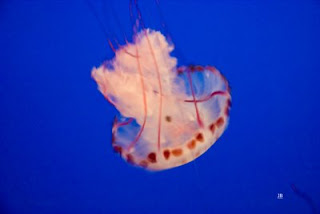 We are still in the KOA in Moss Landing, California. It is a nice little park and the weather is beautiful (high 70's - low 80's, for you back home that means no long underwear) so we thought we should stay here for a few more days. We are booked through until Monday morning and then we'll probably begin our journey inland to the desert. But who knows for sure, as they say, "our plans are carved in Jello."

Today we took a drive down to Monterey and visited the Monterey Bay Aquarium, good tip Moss, and had a look around there. There are some pretty neat displays covering everything from jellyfish a couple of whom are surrounding these first paragraphs up to the top predators such as sharks and tuna. 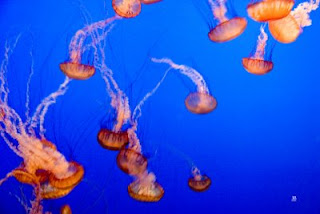 The driving force behind the aquarium is the desire to instill folks with a sustainable attitude towards our oceans. In our case it worked, a little anyway, as after we got done there we headed down the street to the Fish Hopper, shown below, for some seafood for lunch. But they only serve seafood that complies with the Aquariums Sustainable Seafood Guide for the West Coast. Who knew being environmentally friendly could taste so good. Brenda had the Mushroom and Crab Cake sandwich and I opted for the Seafood Linguini. Both were outstanding and did I mention sustainable!! 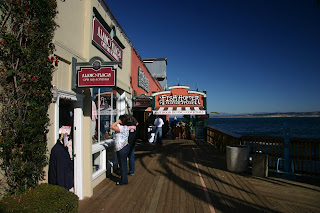 After lunch we walked along the seafront and took a few photos of the scenery and just breathed in that good fresh sea air. Helped us work up an appetite for a couple of Nestle's Toll House Cookies. Wow, who would believe a chocolate chip cookie could cost $1.89. Not me, but it all worked out as after we got back to the Motorhome Brenda was inspired to do a little baking. Now if I could get the marketing down right we are sitting on a fortune as her chocolate chip cookies knock the socks off those Nestle ones anyday. But I suppose that would mean I would have to share them. LOL The rest of the afternoon is just being spent enjoying the nice weather. 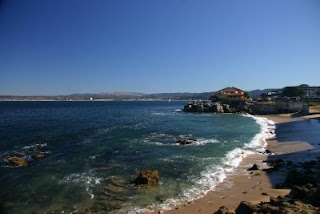 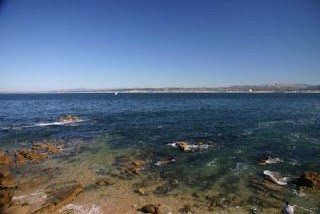 Got some news from home, that Caron, my niece, had her appendix out yesterday. She's a little sore but will be back good as new soon. Good timing as I think on Tuesday her and my Dad were off to Churchill, Manitoba to see the polar bears. If it had happened up there they may have had to remove it with a couple of sharp spoons but the freezing would have come naturally.