Another Desert Day or 2 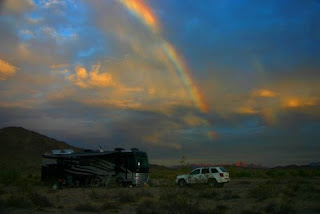 Pretty relaxing out here in the desert. Other than our morning walks there is not much exciting going on to report on. Monday morning Ron and Edy moved on down Yuma way as they have appointments to keep and it appears that they may have inadvertently taken the sun with them. Shortly after their departure it clouded over and if we were home I would have said we were going to get some rain. But other than a few far off sounds of thunder there was no moisture in the air.
I made a journey into Quartzsite and picked up a couple of power bars so that we can have our electrical load under a little more control. The Discovery has a 2000 watt invertor so with the extra batteries that Woody’s installed for us we are able to use most of our appliances just as if we were hooked to shore power in a park. The sun has been largely absent the last couple of days but we have a good sized generator onboard so if need be we can supplement the sun with that. Not so easy on the carbon emissions though so we’ll restrict that to an “as required” basis.
Yesterday after our walk we headed into Quartzsite with Bill and Margaret for breakfast, it was excellent. After that we wandered around some of the vendors in town and although there is a lot of intriguing stuff, I didn’t find anything that I couldn’t live without. Brenda however did a little to help out the economic well being of the town at the Beall’s store.
The afternoon was just spent relaxing and enjoying the warm weather and some good books. Even under cloud the desert is a beautiful spot and there is much wildlife activity about, mostly quail, doves and hummingbirds, but I believe a coyote visits us after dark, as our scraps disappear religiously every night. 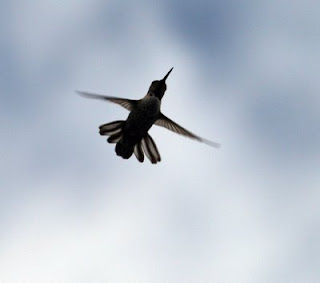 Last night we got a few rain showers and I got up in the night to roll the awnings in as there was a pretty gusty wind blowing and rattling them. This morning we are heading over to Blythe to pick up some shirts I left at the laundry there and from the ingredients on the counter it appears that Brenda’s famous meatball soup is on the menu for later today.
Posted by JB at 10:42 AM