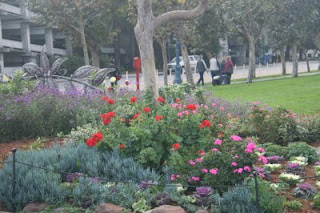 Some flowers along the waterfront

Last night we went for an authentic dinner at a place our Asian (Korean) campground guy recommended, Fook Yuen. It was probably authentic and we realized that maybe we are not authentic Chinese food eaters, the dishes sounded great, but there were some spices in them that did not suit our palates. One was a Salt and Pepper Shrimp dish that sounded great and would have been if they had shelled the shrimp before putting the salt and pepper concoction on them. Once you had them peeled most of the concoction was also on the plate with shell, leaving a plain old shrimp with little or no salt and pepper taste. All that said there appeared to be a few large Asian family groups at the restaurants that were not having the same difficulties we were. Oh well, maybe we are Panda Express kind of people, live and learn.

This morning we are just hanging around camp and Brenda is getting the laundry caught up. The fellow next door to us is having a problem with his slides not retracting so I have been over there commiserating with Mel and his wife Cheng. They are from Jackfish Lake just east of Edmonton in Alberta and are heading to their winter home in Mesa. After some hocus pocus the slides finally retracted and they are off enroute to Arizona.

Once we got everything done around camp we caught the shuttle downtown to do a little looking around. We took the tour to Alcatraz, and found it to be well worth the price. There is a lot of history on that old rock and the tour did a good job of sharing it with us. Not a place you would have wanted to call home for very long. 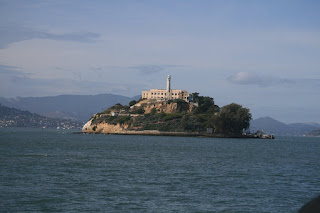 After the tour we strolled down the waterfront to Fishermans Wharf to get a dinner. We decided to go to Alioto's a restaurant recommended by another blogger Terry. Have a look at her site she has some pretty good stuff especially when it comes to finding local jewels in the restaurant scene. Here is the link "http://www.thecampingjournal.com/RV-TRAVEL.htm"
I had the seafood canneloni and it was excellent, Brenda however, had a crab and avocado salad and it was not so great. The view from our table below was second to none though. 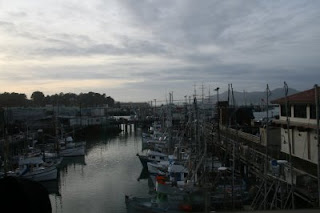 After dinner we wandered along looking into a few of the shops. Brenda found a coat that was a good deal, but I didn't find anything other than a couple of full size stallions rearing that would look good at the farm gate, but I couldn't get by the $85,000 a piece price and didn't want to break up the set.

After a little shopping we went looking for the cable cars. Shortly after we got in the line, about 20-30 minutes, a fellow came along asking all the folks going to Powell to come up front, as we didn't know where we were going we thought what the heck, if it shortens the wait let's see where we end up. The bonus was they were moving the car over to another line for some reason so the conductor let us all ride free. And to make it even better it took us within a few blocks of where we needed to be to catch our shuttle back to the RV Park.

We will have to get a little more exercise before we come back to San Francisco though. There are lot of hills to negotiate and there aren't many easy ways to walk around town. You don't see many overweight folks walking up and down the streets here. I am sure there are some around but they must be living in the flat parts. But it was nice to know the old ticker could still stand a little hard climbing!
Posted by JB at 11:27 AM