The one thing we really miss from our old life of traveling with the RV, was all the friendships we made over the few short years we were doing it. There is a whole sub-culture of folks moving back and forth with the seasons across North America and the internet has connected all those widely scattered dots and made it easy to have relationships with folks with like interests in diverse parts of the country. Case in point, our latest visitors, Paul and Marti Dahl. Now where would a guy in the oil business in western Canada stumble on a fellow in the Coast Guard who lived in Virginia. Well seeing as how it has been a few decades since I worked offshore and probably just as long since Paul worked onshore or at least far from the “Coast”, it is an unlikely match. But through the miracle of the internet and the wide world of blogs we had the pleasure of putting voices to folks whose family, and faces we had already come to know.

The Dahl’s pulled into Dogpound South and we were straight to laughing and visiting. We introduced them to the security detail here at DPS and they brought out their traveling companion Tag to meet Mack and Meg. 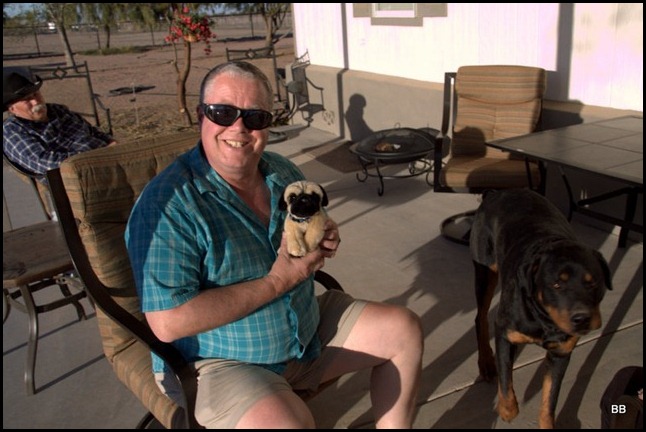 I think it was almost dark before we let them off the deck to go get their rig setup. Then it was time to break some bread and Brenda had made a lasagne and some garlic bread to help us stave off starvation

with and followed that up with some hot brownies with peanut butter and of course the required ice cream. We spent a couple more hours sitting around the table telling stories and laughing, and anyone who has visited us here at DPS knows the stories must have been great, cause those chairs at our kitchen table are amongst the most uncomfortable contraptions ever built and usually I am up and out of them long before the last spoonful of ice cream hits my stomach. But good company makes for comfortable chairs I guess.