Down the Road from Dogpound South

It has been awhile since I managed to get set down and write anything here on my old blog. Thought I better start before folks thought I had forgotten how to type. We really have not been up to anything to exciting around here and although we are having a great time riding and hanging out here at Dogpound South I thought you have probably had your fill of watching our goings on, but just to keep the record straight here is a brief summary of what has been happening.

Rumour has it that our friends Rod and Loyce have snuck back down from Kansas to enjoy a little sunshine here in the desert. We will have to head up that way and drag Rod away from the Wendy’s for lunch some day and head over to that Fuddrucker place he showed us last year.

Willow and I went to the local gymkhana, we took a few photos and did a little competing but seeing as how the camera was back at the trailer there is no evidence of the fact that we won something. Not sure what but I guess if you are old enough and slow enough you get put in a class by yourself and that means you actually make a little money, not as much as you paid to enter but enough to feel good about. Maybe we should retire while we are on top, but it is fun so we will probably be there the next time they roll out the barrels.

I did slip over and take some photos of some of our neighbours doing a little ranch roping one day. It is an interesting sport and some of these folks can make that rope do some strange things on it’s way to catching those cattle. 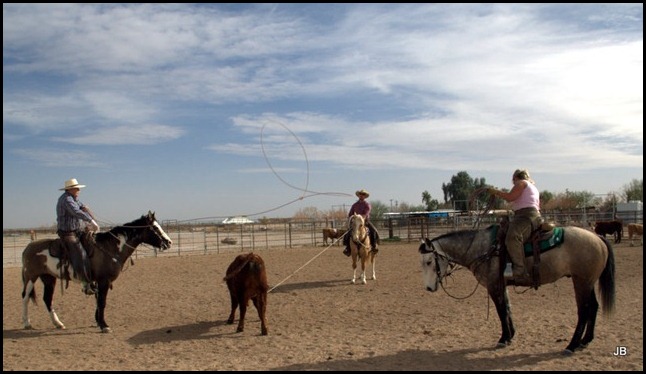 This week Blue and I have been working on his separation anxiety. Horses are herd animals and he and Willow have been living almost exclusively together since we got home last April and he is pretty attached to her. That’s all well and good if he is loose, because he won’t wander off from her but it is a bit of a nuisance when you want to do things with only one horse. That means he has been spending more time with me and less with Willow. She likes that too as it gives her time to enjoy all the feed that he leaves behind. How is it working, well let’s just say we have more work to do, but then we have all day every day to work on it so patience is a virtue here.

Yesterday I ran up to North Phoenix to attend a fund raiser for a horse that needed some serious veterinary care and ran up some pretty big bills. The owner is a member of an organisation that Brenda and I are part of down here, the Arizona Back Country Riders and a lot of those folks turned so I think the fund raiser was a success. I even managed to leave with a little prize of my own, an arrowhead, made by our friend “K”. A few years ago when we first ran into him he showed us around his place here and we saw his extensive collection of arrowheads and at that time he gave me another one of his so this new acquisition will join the old one.

Some other friends of ours had their mini’s at the fund raiser giving folks rides in their cart. Today Brenda and I were up early and loaded the horse and headed out to Morristown to join a bunch of other riders there. We were heading out to find a Stone House that someone had seen off to the SW. It was a beautiful ride that started out along the Hassayampa River. Legend has it if you drink from this river you will never tell the truth again, but no fear, there didn’t appear to much water along the way. 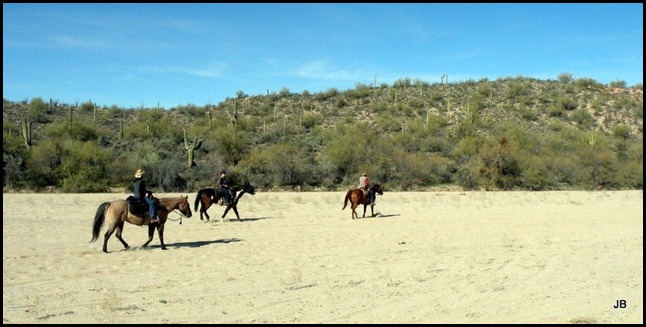 Our friend “K” is often seen along the trail in this pose. He manages to get a lot of great photos of the pretty country we are riding through. 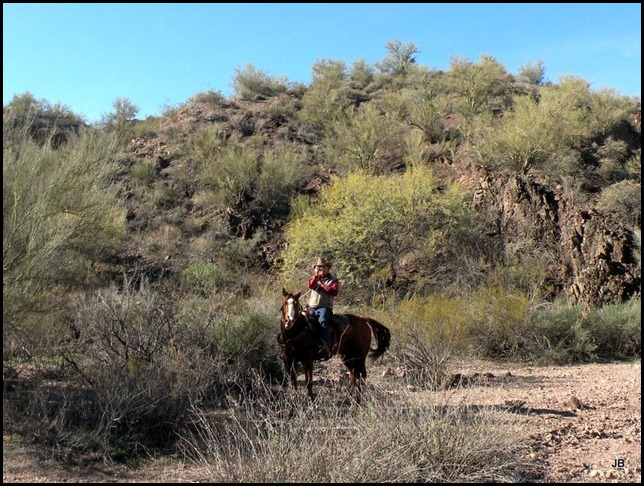 Now we did have a little excitement at one of the stock tanks we stopped at to water our horses. Blue and I managed to get ourselves tangled into a cholla bush and as folks who know the desert know these things stick to you like snot to a screen door. Well I think Blue thought he was being attacked by a particularly vicious desert creature so he went to doing a little crow hopping. Now you know Arizona is mostly made up of rock and one look at the ground we were crossing told me that getting bucked off was not the best choice. Now as the ride was flashing through my mind it looked a lot like this. 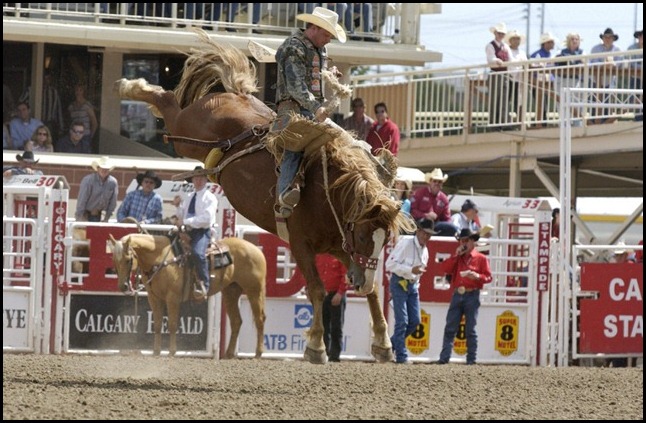 This photo stolen from the internet.

But as that horse above is Papa Smurf at the Calgary Stampede and only the top 20 cowboys in the world ride there it is more likely that to those watching the shot below is more representative of the ride they saw. But seeing as how there were no photos being taken I get to pick the one I live with. 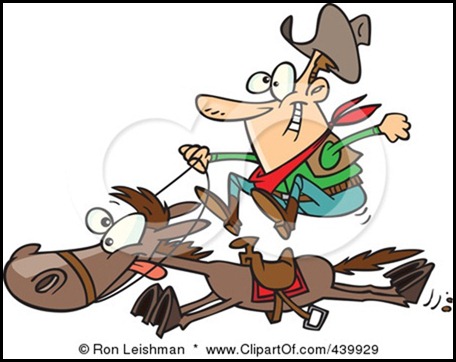 Tomorrow is a new day and we are expecting company here at Dogpound South. Only our blogging friends will really understand but our company have been friends for a couple of years but tomorrow will be the first time we have met them.