After a wonderful Christmas where all her Grandchildren and Great Grandchildren were able to come and visit with her my mother passed away peacefully on December 29th. She had been diagnosed with cancer a year and half ago and made the decision to live out her life without spending a lot of time being sick and tired from treatments that would probably not extend it much anyway. As she said "I am 93 and have had a good long life, done a lot of things and will leave here with few regrets. On to the next great adventure."

She was born in Vermilion, Alberta the first child of Brent and Ethel Macnab. She spent her early years there on the family farm, growing up with her younger brother Brent. They travelled back and forth to school on an old draft horse that my Grandfather had to tune up from time to time when he decided it was not a good day to go off to school. Once she was done in that one room school she went off to Vermilion to finish her grade school. She was her Class Valedictorian and commented in her speech at the grad ceremonies that she and all her contemporaries heading off to University would have to sit out a year as the soldiers were coming back from World War II and they would be taking all the available space that year. She was 16 at the time. She spent that year working at Longs Drugs in Vermilion and completed her Apprenticeship for her Pharmacy license almost before she entered University. Sometime along the way she met and fell for my Dad, and was married the fall after graduation. Dad was a Calgary kid and working in the oil business so after their honeymoon spent on the backroads of Alberta scouting drilling rigs and seismic crews they moved into a house on 17th Ave, near 19th Street NW. While they lived there I came along and derailed her Pharmacy career for a few years I suppose. I was followed by two more brothers, Brent and Kelly, but once she had us house broke she went back to the Pharmacy business and ended up managing a chain of drugstores in East Calgary.

We did all those things that families in the 50's and 60's did, camping, hunting, and fishing together. I remember almost fondly tramping along irrigation canals in Eastern Alberta looking for Ring-necked Pheasants, Mom on one side with her 20 gauge and Dad on the other with his old 12 gauge, and one bird dog or another ranging between them till we filled their limits. She only shot one big game animal to my knowledge, an antelope, and decided that it was more like shooting the neighbours dog than hunting so she hung up her rifle.

As she moved out of the Pharmacy business she took on the challenge of doing the books for both my Dad's companies as well as for Macnab Farms a farming operation that her brother Brent and her ran jointly for near 30 years after taking it over from my Grandfather when he decided to slow down a little.

Another of her long term hobbies was knitting and she knitted sweaters for everyone she knew, a couple even showed up at her service, and mittens by the thousands. One time I drove her down to Phoenix and she was in the passenger seat her fingers just flying and those needles just clicking away. By the time we finished that drive she had the entire footwell full of mittens. One of my memories as a little kid was holding skeins of yarn on outstretched arms while she rolled it into balls in preparation for another sweater, toque or more mittens. Later in life she started knitting small dolls that were sent off to far away places for kids, I know she had an award for knitting 5,000 of them and I am sure she made another couple of thousand before she retired her needles last year. Many of her friends from the complex were wearing those little dolls pinned to their jackets at her service yesterday. 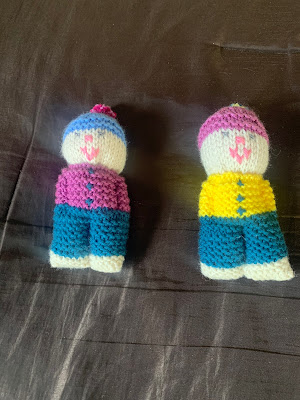 Over the years she traveled extensively, both with family and her friends. She made it to every continent on the planet with the exception of Antarctica, guess growing up in East Central Alberta cured her of the need to head into the snow and ice.

She had a WELL LIVED LIFE

And that is all we can really ask for. RIP Mom and say hi to all those who went before when you get to the other side.