Since we got our Discovery almost 4 years ago I have off and on searched for the trailer brake wiring harness that is supposed to be run from the hitch up to the drivers seat. Over time I have had the dash apart a couple of times and spent countless hours laying on my back holding my flashlight in my mouth while I rummaged through the rats nest of wires under the dash. All indications were that the cable was tagged and color coded so that hooking up a brake controller would be simple thing. Well they were right about one thing, hooking up the controller was simple after spending another 5 hours today pulling wiring harnesses apart, I can upon a plug wrapped in rubber and tape. Different coloured wires that I was expecting but a little work with the meter and the internet lead me to believe that I had finally found the harness. I should have had some pictures but my wise wife knew that when I am being frustrated by something it is a good time to stay clear. That way I can swear at myself, I am much quicker to forget.

A couple of months ago I brought the bus out of the shed and got it all de-winterized and ready to go so today should have just meant loading up with water and we would be ready to go. Well the theme today was not on taking the easy route and for some reason my water pump was cycling on and off. Usually this means that there is a leak somewhere and plumbing is not my forte but I thought I would have a look and see if it was something simple. After crawling around checking all the usual spots there was no indication of water leaking so I decided maybe it was the pump itself. I carry a spare so I put that in and lo and behold it did exactly the same thing. Hmmmm, no leak but obviously something was letting the pressure off. It took a while but eventually the pump managed to get the pressure up and shut off but after the water was run for a while it went through the same gyrations. Eventually I took the filter out of the casing and put it all back together and it all worked fine, go figure, I guess I will get a new filter and start from there. Hopefully it just needs changing out.

All this activity is getting things ready for a road trip later in the week. We are heading up to the Buffalo Creek Ranch and the Auburndale cemetery where we are going to put my brothers and my fathers ashes in the family plot up there. That is where my mothers family is from and my Dad spent a lot of time up there and indicated that he would like to have some presence there after he passed. I spent a lot of summers up there and that is where I learned to ride so we always like to take the horses along on these trips and hit some of those old childhood trails with my cousin Mike. It will be good to see the Macnabs and the old places again.

Now a flashback to yesterday, and the party. I got some great gifts, some of which will be making their way to Dogpound South, but one was put to work here this morning. Anybody who has sat around the campfire, especially at breakfast time, has heard my story about how I used to have a waffle iron but it got sold out from under me when we moved into our new house 10 years ago. I guess Brenda was tired of that story, she sold it, so she broke down and bought me a new one, bigger and better than the old one. So guess what was for breakfast this morning. 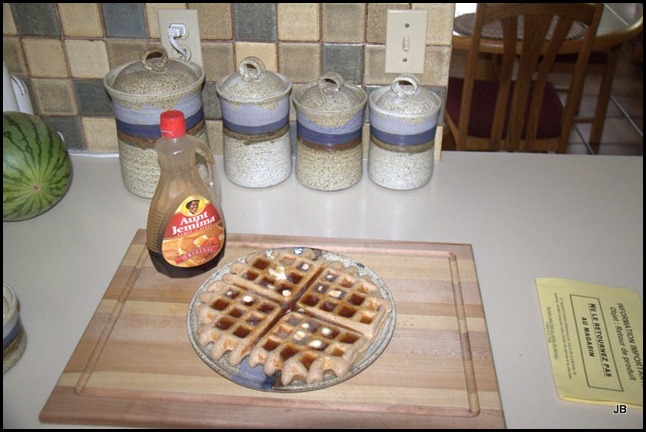