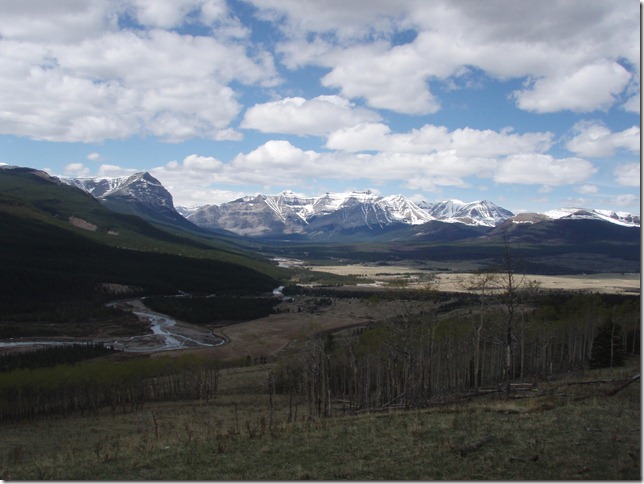 There is a campground down in the middle of that picture that has no sewer, no water, and certainly no power, in fact not even designated sites to pull into, but when it comes to location this is “IT”. RV’ers talk about a site of having “it” while we all have a definition of “it” in our own minds, mine looks a lot like the photo above. This is the location that longtime readers have heard me brag on time and time again. And more than likely if I am lucky enough to be able to keep rambling on you will hear me bragging about in the future also.
We loaded our horses and jumped into our camper and headed for this little Canadian paradise for a few days away from it all. Although the scenery is great, the road in is usually a great deterrence to the faint at heart. It was actually pretty good this trip as the grader had just made its yearly trip into the ranch. It takes about two hours to reach the Big Horn Creek site from our place just out of Cremona and more than half of it is gravel road. Well if it was paved it would be full of big rigs and you probably wouldn’t be able to get a decent spot from breakup to freeze up.

View Full Album
Yep those shots above are all of the same scene at different times over the few days we were out there. The best part is they were all taken from my lawn chair and were the view we had out of our rigs windows every morning. Photography does not do this place justice. The whole time we are out here we feel like we are riding or walking through a painting. The shots below are some of the wildlife that are populating the ranch. Well except for Meg, she finds her way into most of our adventures and is looking forward to heading south this winter.

View Full Album
There is a wintering population of elk that number in the hundreds here on the ranch and in the surrounding territory and they will show up later in the story also. 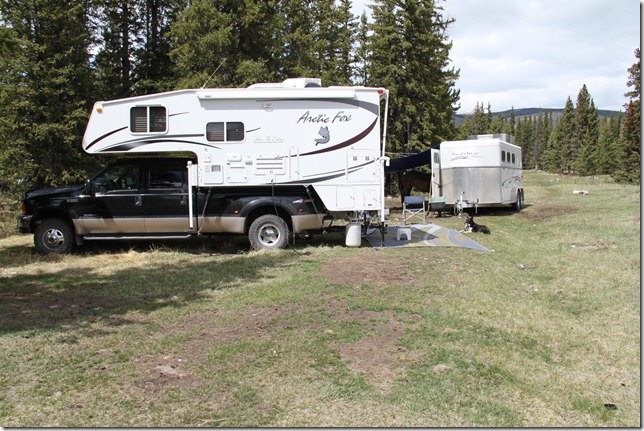 This is the rig we use to head to the mountains with in the summer and although it isn’t as big as the Discovery it is certainly great for getting to pretty spots. The shot below is taken from the top of a ridge we call “Lonny’s Hill” and the rest of the world call Eagle Lookout. We have a friend named Lonny who got married up here, why we don’t call it “Robin’s Hill” I am not sure. She was the other half of the wedding party and actually grew up right at the base of this high ridge. 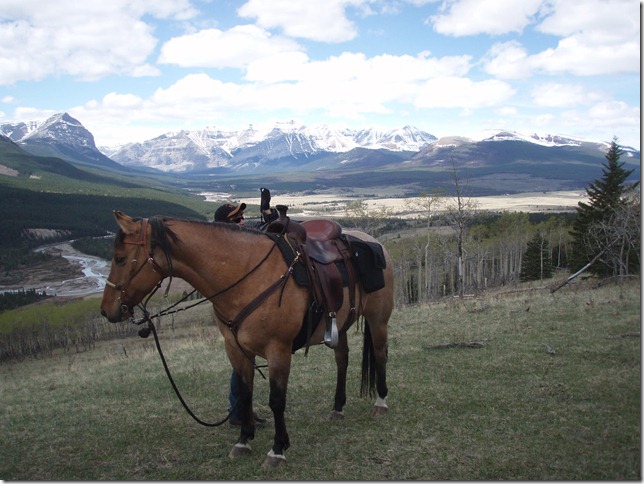 Now the next two shots are different views of Eagle Lake and the surrounding landscape, the first looking east through the pass and the other looking back west at the main body of the Rockies and Banff National Park peering over the horizon. 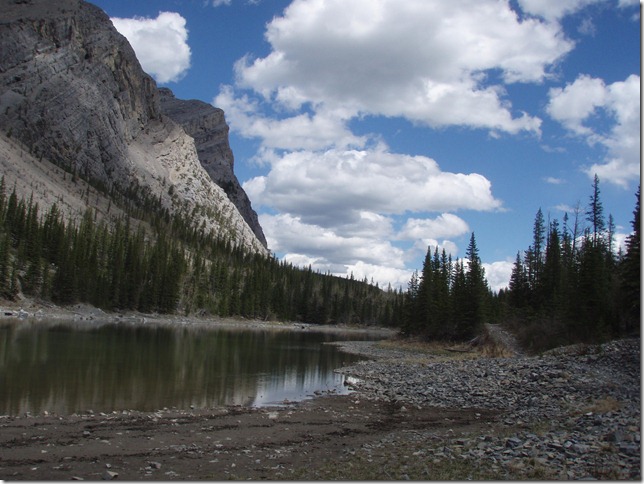 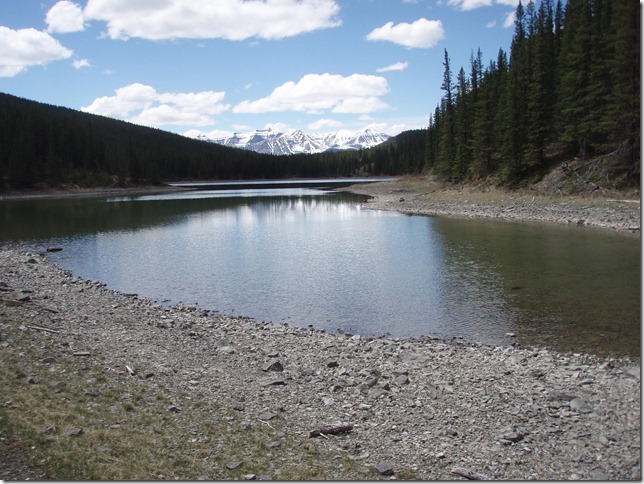 Below is a shot of James Falls just to the east of Eagle Lake. It is a beautiful little waterfall that is one of our favourite lunch spots when we are over this way. Our friend Sheri always tells us to make sure to bring a little extra to feed the wee ones while you are here. 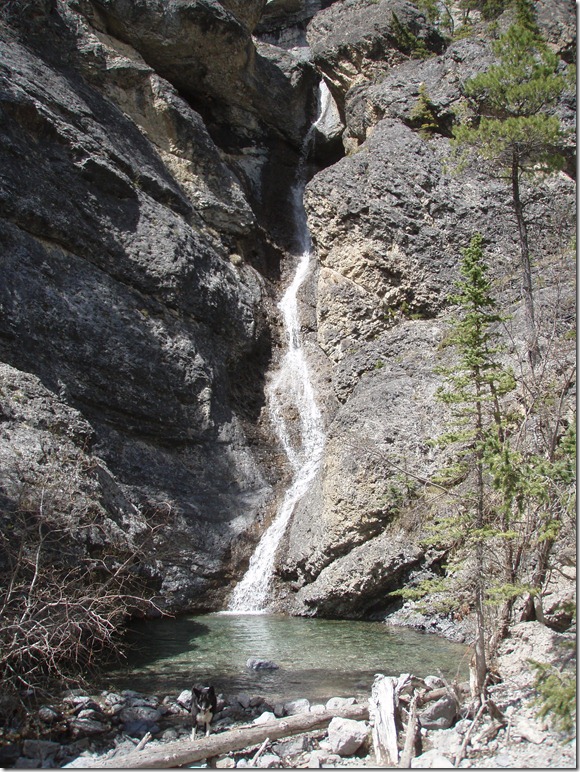 Now just so you don’t think it was perfect it is important to remember that the May 24th weekend in Alberta usually has a little snowfall just to remind those camping for the first time that the weather is pretty unpredictable in these parts and although for the most part we had good weather the mornings were a little nippy and one afternoon we did have a snow squall blow through the country. 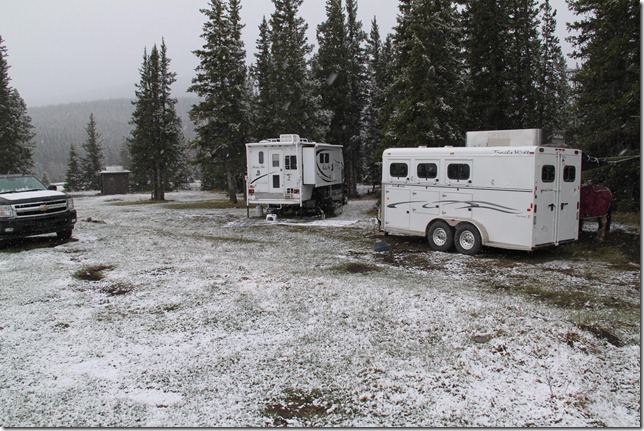 Now I told you we were going to bring those pesky elk back into the picture later in the story and that is about to happen in the near future. The shots below are not of the James/Younger gang but a good Canadian imitation the Schmidt gang a group of desperado’s that call Drayton Valley, Alberta home. Dave and Sheri are good friends of ours that we met here at the ranch a number of years ago and riding with them is their daughter Heidi and son-in-law Darcy Erickson. 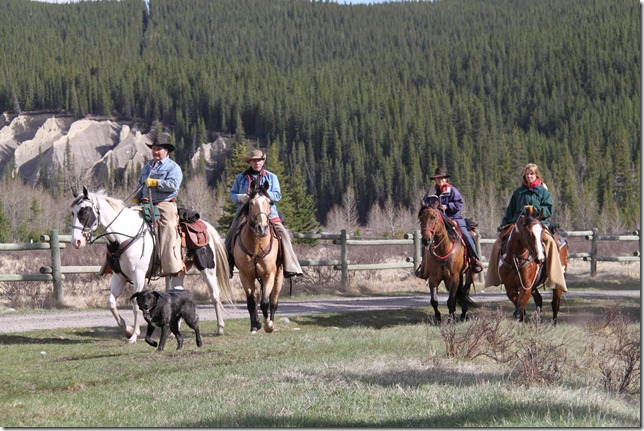 Now nobody wishes more than me that I could get another shot like this the next day but an elk with a mission leapt up from it’s bed right under Sheri’s horse and after some commotion Sheri was left laying on the ground with a broken femur. Now this is one tough cowgirl and she can ride most anything with hair on it so I am thinking that commotion must have been a sight to see.  Dave is a pretty experienced mountain man and this is not their first brush with mountain emergencies so he had along both a satellite phone and a SPOT personal emergency locater beacon. He tells me that within an hour of pushing the button there was a helicopter on site with two more including the STARS, Shock Trauma Air Rescue, helicopter on the way. Now the STARS folks had Sheri on the way into hospital in Calgary and at last report she is out of surgery and probably planning her next ride at the Yaha.
Just as an aside, Sheri, I know some folks in the helicopter business and if you really want to get a look at the country maybe I can fix you up. On the choppers I use you can’t lay down but the ride doesn’t always end up in the same place either.
Posted by JB at 11:46 PM