Last Friday morning, early, I hit the trail south. We had spent the couple of days before that making sure we had everything loaded so Max, Maya, and I just had to jump in the truck and we were off. It was a quick leisurely drive south. Without the ponies we saved a couple of hours at the border so the first day we made it to Lehi, Utah where we pulled off at the Cabela's to spend the night. A walk with the dogs, a bite to eat and it was an early night.

That made for an early morning so we were up and gone long before the sun, in fact we were coming down the hill into St. George, Utah when that lazy old sun made an appearance. We have done this trip a few times so have figured out where to fuel and where the dogs can get out for run. We were pulling into Dogpound South (DPS) about mid-afternoon. Everything looked good here, so we got a bunch of stuff unloaded and then kicked back and enjoyed the sunset.

Sunday morning early, I was up and enjoying Ol Sol's return to DPS. 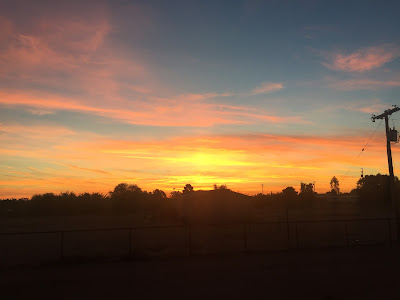 And then it was time to get the deck and house pressure washed to get rid of the dust, and spider webs that accumulate over the summer. Shorty does a great job of the yard so there is not much to do there, it is just a matter of getting the deck spiffed up so I can haul all the patio furniture out of the house. It was good to get an early start because it was heating up pretty good by noon. Getting the outside stuff done early meant once it got hot I could move inside to start doing a clean-up inside. Long time readers will remember we had some work done to repair some storm and robbery damage last year. That meant we got a new door, complete with new frame. The old door had a gap underneath it that the bugs and dust availed themselves of to find a nice summer home, this new door appears to have been a better barrier so there were a lot less bugs and dust to vacuum up.

Monday it was time to put some provisions in the fridge as well as head into Costco to get some steaks and a few other things like dog food. Then a stop at Home Depot to pick up a new post for our mailbox and some hardware for that job. I got the post for the mailbox set in the ground so we'll let it set up overnight.

Today I got the mailbox mounted and let the Post Office know we were ready for mail again, as well as making an appointment to get the snow tires off the Buick. When I brought it down here a couple of years back it had a pretty decent set of winter tires on it and as I figured it might never see snow again I decided to just run them off. It also has a set of good summer tires so we will get those out of our shed and on the car tomorrow.

After our break-in last year where the perps shut off the power I locked up our power box but I guess the power company doesn't like us to use our own locks so I stopped by and picked up one of their locks on my way home.

I also hit the pool for a quick swim. It has been a few months since I was in the tank and my body sure felt it. I wasn't sure I was going to make it to ten lengths, sad since in the spring I was doing 160 with a break. But I did get forty in and tomorrow is another day.