A Different Kind of Trail Ride

As Al from the Bayfield Bunch would say Yahooie Louie, Brenda has made it to Arizona. I ran into Sky Harbor to pick her up on Monday afternoon. Enroute I had some things to gather at Costco to start her re-provisioning of the place down here at Dogpound South. I guess the bag of spuds, package of steaks and jar of peanut butter that I had wasn't satisfactory.

I spent a large portion of the weekend dusting and vacuuming around the place here but as I expected she was soon redoing everything. Tuesday morning she was off to Fry's for a big grocery re-supply, so I headed off swimming so I was limbered up for the hauling the big load into the house when she got home. I am trying to get a swim in on most weekdays, nice to have the great Copper Sky facility so close, and usually for most of my swim I have the pool to myself.

On my last solo journey out into the desert with my ATV I met some hikers coming out of a wash, I stopped to chat with them and turns out they are from Canal Flats in British Columbia, having recently retired and moved there from Rocky Mountain House, Alberta. Turns out they know our daughter Lacey. They also have an ATV and told me that they would give me a shout next time they were heading out.

Friday evening I heard from Paul and Linda, telling me that they and another couple, Brad and Carol were going to run down to Vekol Ranch late Saturday morning with the ATV's. I met them at their place a few miles from Dogpound South (DPS) and off we went. Now in the past when I am out there by myself I just poke along, but these guys cover ground in a hurry. Amazing how fast you can actually move with these machines and the suspension just eats the bumps. And seeing how I had no idea where we were going I had no choice but to keep up. That sometimes is a challenge as you want to stay far enough back to avoid most of the dust but close enough so when they take a fork in the road you don't miss the turn. I am a decent tracker and given time I could probably figure which way they went, but at the pace they set, pondering the turns would just put me further and further behind, so driver her McGyver was the order of the day. They did stop along the way for a cool beverage though. 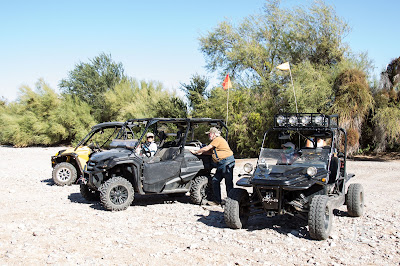 As this was my first trip out with a group I had brought along my extra gas can, just never know how far this guys we're going and I don't yet have a good handle on how far my outfit will travel on a tank, so better safe than sorry. After asking that question they assured me they never really travel more than a tank of fuel on a trip as they would have to leave some coolers full of beverages home to make room for gas. I'll know for next time. Bigger coolers and smaller gas jugs, Got it!!

After a short break we headed south up Vekol Wash, under I-8, and soon arrived at a spot they call Vekol Ranch, an abandoned set of buildings. Rumour has it that it was inhabited as recently as the 1970's, but I am betting water levels dropping caused it to stop flourishing. The old well sounded pretty deep but a rock dropped down it just hit a dry bottom after a long fall so that probably confirms my theory.

The house was made out of cement blocks and all the walls and outbuildings were fashioned from stone. The fireplace below as well as a big fireplace inside the house were also built with stone. Probably hauled in from the mountains you see in the background and obviously, from the green tint, a copper rich environment.
We ate our lunch at this stop as well.
After lunch we continued on south to another spot where some enterprising folks had built a kind of stone boundary complete with lizards, stone, and other figures outlined with local stones. A lot of work went into this and it appears that most folks are respecting the work and leaving it be.

It would be interesting to talk to the artist and hear just what it is meant to signify, I think it is pretty recent stuff, unlike the Medicine Wheel we came upon while riding up near Wickenburg. This was the southern terminus of our trip and we basically followed the wash back up to the Petroglyphs I was at a couple of weeks ago and then on to DPS. Overall we traveled about 50 miles through the desert and it appears that I had lots of fuel left, I think I am down to 3/4 of a tank now, so I might be able to leave that jug at home.
Posted by JB at 5:00 PM