We got back from the Hummingbird and lo and behold the Calgary Stampede was in full swing. The catch phrase this year was Stampede 101, Come Hell or High Water, and although we had the high water this year, the Stampede went off without a hitch. Oh yah, a few big concerts had to be cancelled when the Saddledome filled with water but other than that things went along pretty well. 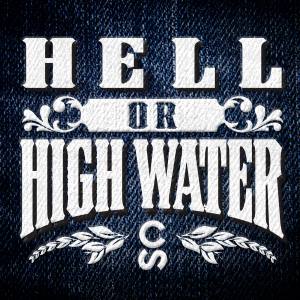 The folks at the Stampede put together a T-Shirt with that logo on it and at last count had sold 150,000 of them raising approximately $2.1 million for flood relief. The city had a good time and like the mayor said "you might not see Calgary at its prettiest, but you will sure see it at its best." Neighbours were helping neighbours and although it will be a long time till things are back to normal, things are getting done.

We took a spin down to the grounds with Kashton and his parents. Always great to see an old familar place through the eyes of a child. He loved the rides and getting him off was a job in itself. If he had his way he would have just stayed driving the cars and riding the rollercoaster while his Dad ran and got more tickets.


It was a great day at the Calgary Stampede's 101st edition.

Then this week I headed over to the Dogpound Rodeo grounds to enjoy our local rodeo, it has been running for 107 years and is still a local must do in this area. Seems like everyone in the country is there and a lot of them are participating. Me I participated in the pie eating and took a few pictures. 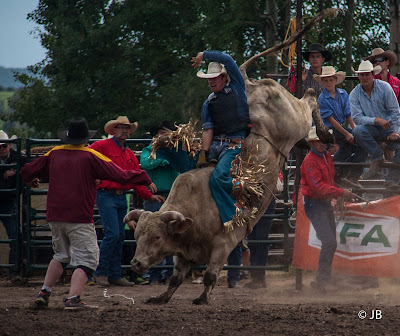 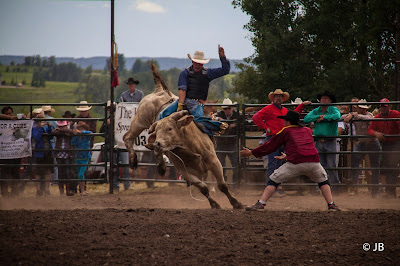 The Dogpound Rodeo is always a fun time and well attended even though it always runs on the Wednesday after the Calgary Stampede show ends.

Today Brenda was off to Chestermere to keep an eye on Kashton while his mother was off selling houses or something, and Wink and I had a date with the Brand Inspector up in Olds to get that out of the way for our upcoming ride across the provincial border, and our trip south next fall. We are off with some friends to ride along the Alberta-Sask border. It isn't the mountains but it should be pretty nice as it was a famous American's, Sitting Bull's, summer home when things got a little hot down around the Little Big Horn. Who knew, he might have been the first snowbird. More on that after we return.
Posted by JB at 5:54 PM