Last time I wrote we were coming back from Camp Creek on Saturday. Sunday, Blue and I headed up to Pocock’s, for a little cattle sorting practice and Blue did pretty well although after sorting about 40 head he decided he had had enough of this foolishness and was going home. Well we had a little visit about that and after a little reconsideration and some counselling from me he decided that maybe he could wait until I was done the day before heading out. But that is why they call it practice I guess.

Monday morning broke bright and early and Brenda was busy making buns here. Last week Laureen (Maid Marion) had arrived with Robin Hood (the Canadian flour) so everything was in place for a bread making day. I had a few rolls while they were still hot from the oven and Brenda ran a dozen or so up the Heggie’s as a thank you for hauling our flour down for us. And then Monday evening we were off to Raceway for a pizza and a meeting about the upcoming gymkhana, December 18th, where we ran into the Heggie’s again.

Tuesday Brenda was again up bright and early as we had to prepare for the arrival of our guests. Mac and Lynette our RV’ing friends originally from Kansas were coming through on their way to their winter spot in Yuma and were planning on visiting us here at Dogpound South for a couple of days before finishing their journey.

As usual this visit was sprinkled with ample opportunities to break bread and for supper Tuesday night we feasted on Steaks, Brenda’s Cheese and Bacon Twice Baked Potato Casserole, garlic bread, fresh buns, and salad. 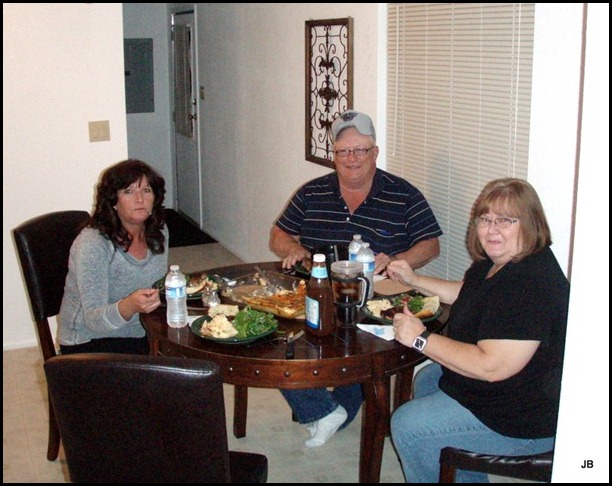 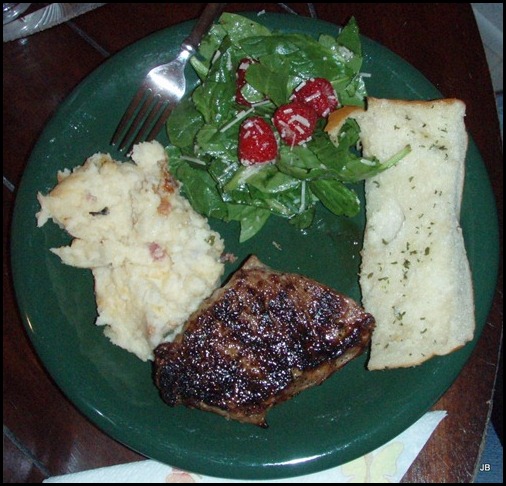 And of course we needed to top it off with a little desert so we had a Pecan Pie Cheesecake with Vanilla Wafer Cookie Crust, oh so good, and hardly any calories at all……lol.

And of course a lot of chin wagging and story telling going on from the minute they arrived until bedtime.

Wednesday we headed into Casa Grande to get a little lunch at Eva’s Mexican Cafe and then of course the required stop at Wal-Mart on the way back here to Dogpound South. Then Mac and I ran into town to pick up a little fuel for their trip tomorrow and to give our lunch time to digest before we got sitting down for supper.

I haven’t had a chance to mention it but on Monday the receiver for our Shaw Direct Satellite system arrived from Montreal, and we were able to get our TV up and working. That meant we could catch up on the National Finals Rodeo goings on as well. For some reason the Canadian provider choose not to have the rodeo on live but has a couple of tape delayed replays on the day following, and we were catching up on some of that while telling some stories. The stories actually got a lot more attention so we actually had to watch Tuesday nights go around twice so that I could actually see what was going on in all the events.

Last night after lunch at Eva’s Brenda decided we needed something a little less filling for dinner. So we had a bowl of that Pioneer Woman’s Cheese Corn Chowder and more of those fresh buns. And after that healthy meal of course a little more desert was in order and Lynette brought in a Lemon Butter Cake to fill the gaps and those with bigger gaps than others also had another piece of Brenda’s Pecan Pie Cheesecake. Needless to say I have been falling a little behind on my Ice Cream Therapy the last few nights but I will make up the time somehow…..lol.

This morning Mac and Netters were hooked up and headed towards Yuma to settle in for the next four months. We enjoyed their visit and look forward to running down to Yuma and hooking up with them again over the winter. 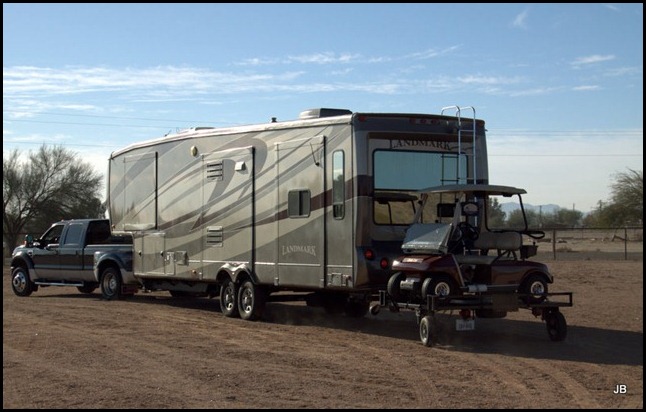 Quite a train you got there McHenry’s with that DLT hanging on desperately behind you.