Some Photos of the Jobsite

I've promised some pictures of the area in NW British Columbia where I am working this summer so here goes. This shot with a rainbow in it is from an old Gulf Coal mine site on Lost Fox Ridge near Mt. Klappan. It is just one of the spots in this country that draws you back time and time again. And people ask why I went back to work, between the land and the folks who live here it is an almost irresistible pull. This is about 111 kilometres off of the Cassiar Highway but we have the road fixed up so well that you can drive all the way in with almost any kind of vehicle. The first 25 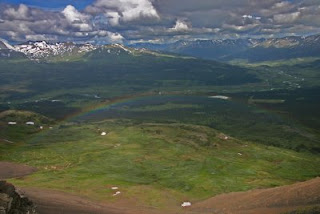 kilometres is on a road called the Ealue Lake road and it does go by that Lake. After that first 25 km's you turn onto an old BC Rail grade and drive another 86 km's till the turnoff to the minesite. You could continue on for approximately another 50 odd kilometres without to much trouble if it hasn't rained to recently. Certainly down to about Km 140 it is passable with no problem. Of course this winter we will not be working in the area so old Father Winter will implement his own road closure. It takes a massive effort to keep the road open as there is a pretty heavy snowfall in this area. The second shot is just of a scene in mid-September along the railgrade. I have characterized a trip into this country as like taking a drive through a painting. The scenery throughout this part of Northern BC certainly has a high wow factor in every season and irregardless of the weather. It is no more spectacular on a beautiful sunny day than it is on one that is rainy and misty.
And of course world class scenery is not really much without world class residents. This valley is home to a large population of Grizzly bears, Black bears, Wolverines, Lynx, Moose, Caribou as well as Marmots, Stone Sheep and Mountain Goats in the higher elevations. The bear below is just one of 5

that I saw on a single trip into this location. Three Griz and a couple of Blacks all just going about their business with no concern that I was in the neighbourhood. As the season progresses to fall that laissez faire attitude disappears as the hunters come to the land. But for thousands of years the residents of this land have depended on each other for sustenance. Holy smokes that's a nice way to put eating each other. But that is the way of the land. There are many other photos that I would like to share with you but I need to figure out a better way to import them so that the aesthetics don't take away from the subjects.

A local Lynx, now that would control your rodent population.

As I have wandered around the internet reading posting I have seen a lot of coyotes mislabelled as Grey Wolf sitings, just for the record this really is a Grey Wolf and once you've seen the real thing the little old yodel dog just don't measure up. It's all in the eyes, and oh yah, he probably out weighs a coyote twice or more.

But why spend all this time in the North, away from my family you ask, it is a means to an end and the end has an Arizona sunrise figuring prominently ever morning. This one was near Why, Arizona last winter and I am hoping to see a great many more this winter.