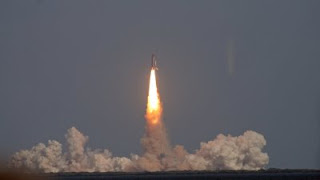 Hmmm, there may be more to this blog writing than I originally thought. I wrote the last entry on the 1st of January and here it is early in September and I am making my second entry. I haven’t had a good internet connection this summer so although I have actually written this a few times it seems to never get saved. Going to do the draft in Word and then try to transfer it to the Blogger form. That way if the internet flips out I won’t have to remember what I wrote and can get on to the next post, and put them all on when the connection is better. We were in Key West, Florida when I last wrote and have seen a bunch of country and put a lot of miles on since then. We hung out at East Lake Fish Camp near Kissimmee for the rest of January and into early February. It is a great spot, a little run down but definitely a jewel in the rough, and reasonable also. Met some super people during our two month stay. After watching a Space Shuttle launch in early February, with some folks, Randy and Sue Beck, that we had originally met in Nashville, we decided to get back on the road and head towards Arizona.

It took us almost two weeks to get across, but we stopped in Gulf Shores, Alabama and New Orleans, Louisiana for a couple of days each. As well we stopped in Beaumont, Texas to visit with some friends we had made earlier in the winter in Longmont, Colorado. Idell Jacobs and Donna were there to see us arrive in Longmont with the roof held on with tarp straps. We spent a couple of days with them and broke bread a couple of times with them and met Idell’s nephew and his wife, Reg and Jeanne. Great folks who we will definitely cross trails with again.
After a couple days catching up there we headed over to Houston and had the coach serviced. Then it was off to San Antonio and the Riverwalk for a couple of days. The San Antonio rodeo was just finishing up but there were absolutely no tickets available so we just enjoyed the rest of the town. Then we headed off to Arizona via a lot of Texas and New Mexico.
Once we hit Arizona we had to stop by Tombstone and have a look around. Tough place for a cowboy type to pass by without at least a short look around. We’ll be back. Then it was off to meet Bill and Margaret Klepacek in Why, Arizona. Why not? Bill and Marg are friends of ours from Dease Lake, British Columbia. They run the Dease Lake RV Park in the summer and hide out in the deserts down south in the winter. If you are on your way to or from Alaska it would be a shame to avoid the Cassiar highway and if your in Dease Lake stop and say hello to Bill and Marg. We thought we would spend a couple of days boondocking with them but it turned into a week with more to follow. After spending the winter in RV parks across the country it was a welcome change to be away from the traffic and the hubbub. Although there was a lot of Border Patrol activity around in the night. Horses, trucks, quads and helicopters all looking for a few Mexicans sneaking across the desert in search of a better life. I am sure there is a lot of impact on the economy from these folks but it seems like they are spending more money trying to catch them than it would cost to solve the problem. After a week in Why we headed off to Apache Junction looking for a place that we could bring our horses down to next winter. After a few days in Apache Junction we moved over to Wickenburg with the same mission. There are a few places around but seeing as how there is a huge grass shortage in the desert it is quite expensive to board horses down here. I think we will have to spend another winter doing the necessary research to answer the question of whether or not to bring the horses. While in Wickenburg we hooked up Ken and Theresa Rogers some folks I had connected with through Flickr, a web site where I have some photos posted under the name JBBAR. They have a great spot in Goodyear a small town being swallowed by the Phoenix metropolis. Also managed to get together with some old friends, George and Shirley Bertram and Bud Sinclair and Art Bapte for dinner at the Bertrams. Great dinner and the company was superb. Good to see some old doodlebugger friends.
We headed out of Wickenburg to go over to Quartzsite and join back up with the Klepacek’s for more lessons on how to boondock in the desert. Lot’s to learn from these folks and we get along great. What started up as a few days visiting turned into the rest of the winter. We were almost stalking them but they just seemed to know all the great spots.
This was a shot of Bill and Margret’s outfit one Quartzsite evening

We convinced them to follow us up to Prescott though. Must have been some DNA dragging us up there, before we left we had snow on the ground, reminding us that we have to head north towards home soon. We took a run over and visited Sedona while we were in the area though, nice place, reminds me a lot of Banff, Alberta except the mountains are smaller and red.
As we left Prescott it started snowing off and on and that lasted all the way Kingman. Apparently just behind us on Interstate 40 near Kingman there was a big pile up, not surprising, the visibility was almost zero and no one other than Bill and I even slowed a little. We headed down to Laughlin and pulled into the Tropicana Casino. They allow folks to park in the lot for a few days as long as you join their Members Club. The camping was free but I suppose we left enough money in the Casino to make it worth their while.
From there it was off to Overton, Nevada where we camped on the mesa south and east of town. Beautiful vistas but boy was it windy. We also ran into the only “Ugly American” we saw on our whole 22,000 kilometre trip. I think he had had a little too much bourbon in his life and the effects were pretty near permanent.
While the winter getaway was coming to an end and we headed up to St. George, Utah via Mesquite, Nevada to prepare for our dash towards home. Once you leave southern Utah the weather is a lot cooler so the slow ambling method of travel we have used for the last month or so is unsuitable. It took us three days to get home including some last minute shopping in Great Falls, Montana. We arrived back in Cremona just in time to help celebrate our daughter Rebeccas birthday on the 28th of March.
Posted by JB at 12:04 AM