Dogpound North to the Yaha Tinda

Last Wednesday we thought we should take a run out to the Yaha Tinda and take along our ponies and the new rig to see how they all worked together. 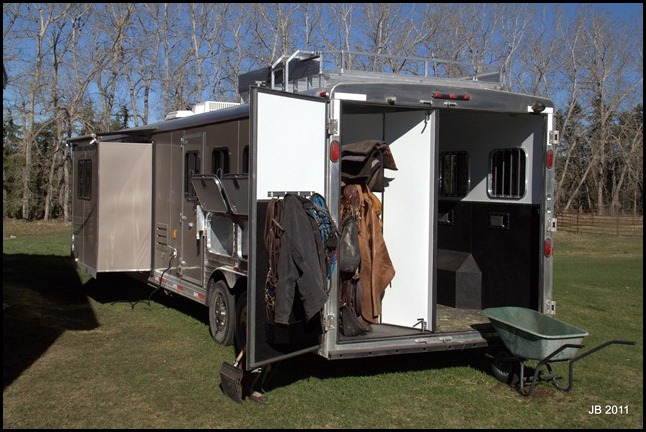 It took us a while to get all of our stuff loaded into the new rig and you can’t travel with horses without bringing along a lot of feed and things to make sure they are comfortable for both the ride out and the stay in the hills. This new rig doesn’t have nearly the storage that our old trailer did but you have to give up something to combine both units into one, so I guess I will just have to pack better and decided which spares I will need and which I have been hauling around for years without every needing. Now I just know that it will be one of the latter that I will need first.

But it was good to head into the back country and see some old friends along the way. 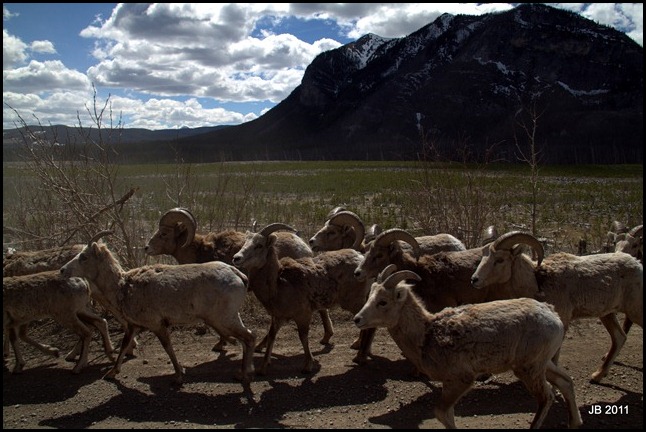 Not sure where these guys and gals were heading but it was in the opposite direction than the one we were, so we just carried on to the ranch to check on some other residents out there. 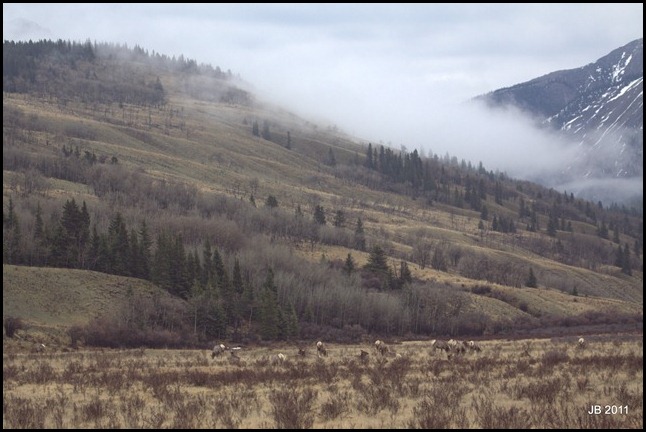 The resident elk population appeared to make it through the winter with only a few losses. There were probably close to 500 of these critters hanging around in view of our campsite for most of our stay, although as the weekend wore on they were only on the hillside in the early mornings and later evenings. 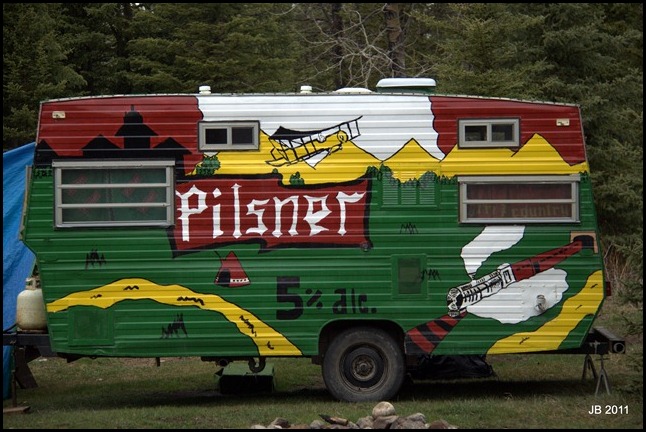 There even appeared to be some artists in residence although I am sure that these folks like to have a few brews while they work, if only just for inspiration. Now the fellow below was new, to me anyway, and even though it appears the Yaha Tinda is in the eastern part of his mountain range, it was the first time I had stumbled upon a Western Tanager, at least one in full breeding plumage. 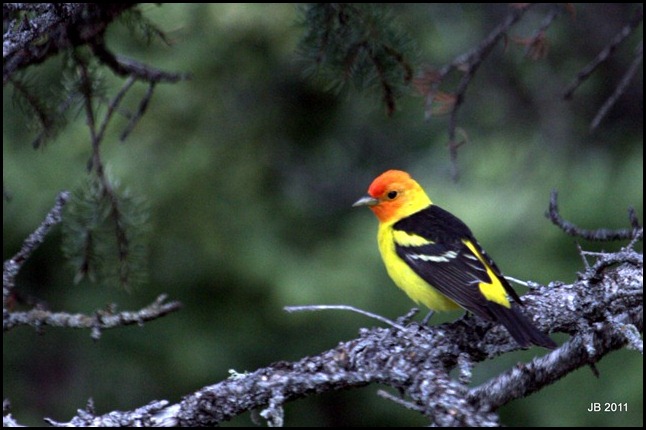 There has been a little trail work done in the area over the past couple of years and it would be remiss of me not to mention and thank those folks at Suncor and SHELL who have contributed in so many ways to our enjoyment of this special place. And not only is Shell a great corporate citizen in the area when it come to Environmental Enhancement they are also the primary sponsor of Brenda and my Incredible Adventure. Thanks to all those hard working folks who actually make up the soul of the company. 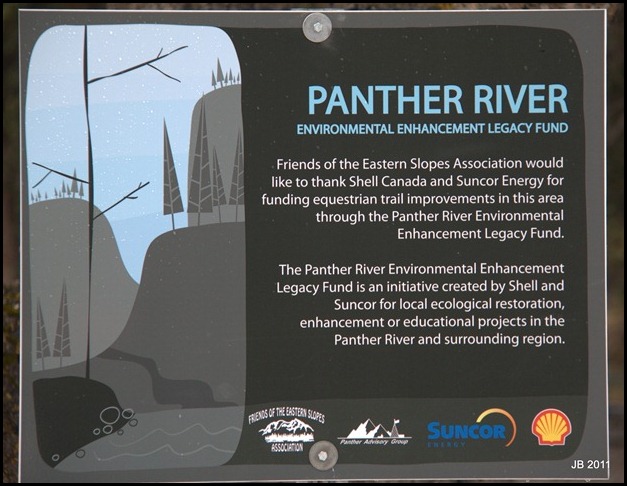 Here is a shot of our campsite with the trailer set up and the horses over in the trees on the right. 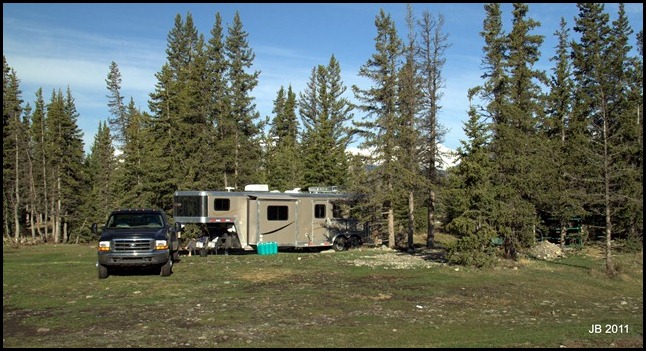 And finally a picture of the real stars of the weekend, Blue on the right and Willow behind. I mentioned in an earlier blog that Brenda`s favourite horse, Rosie, was having an issue with some arthritis so it appears that her trips to the mountains will be curtailed in the future and she will likely be relegated to the most esteemed position of `pasture ornament`and her only rides will be with our grandchildren around Dogpound North. Willow will fill her spot in the mountain team, a position she has held for much of the last 10 or 12 years off and on. Brenda rode Blue this weekend and Willow once again became my ride of choice. 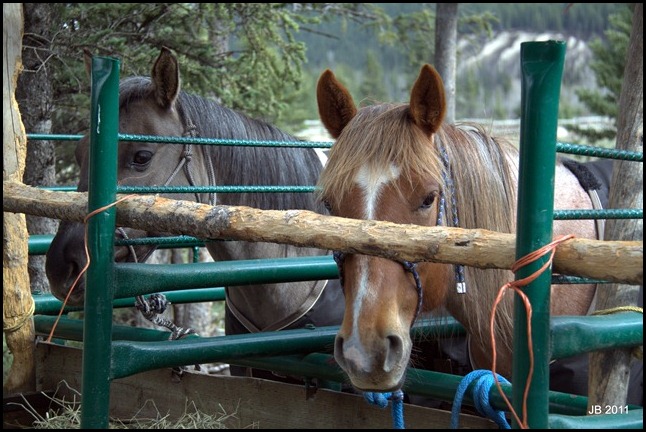 We came home Monday afternoon and it has been raining here ever since but given a choice we will take the rain over the tornado`s that many of our friends have been contending with in the central and southern states. Just a suggestion but we have room for lot`s of visitors here at Dogpound North and although tornado`s are not unknown in this part of the country they are far less frequent than down south.

Tomorrow we head off with our daughter Rebecca to Rocky Mountain House to visit with Lacey, Clayton and of course Miss Ella for a few days.