We are getting into this laid back lifestyle here in the desert. This morning I had to leave my walking partner home as she needs a break. Must be the constant rocks she is running over out here. I am sure a day or two off will have her back to normal. As Retired Rod says it is unlikely that I can out walk her but she doesn’t know when to take it easy and insists on running at least twice as far as I walk everyday. So the only way to get her to take a day off is leave her in the rig when I go out.

I did manage to get through the George W. book today. It was an interesting read and nice to see the last eight years and some of the major decisions from his point of view rather than the press’s. Like he says though it will probably be fifty years until the jury comes back in on whether or not he made the right ones.

We walked down in the afternoon and had a nice visit with Mike and Janna even though Meg spent most of the time working hard to train them to throw sticks. So far they are resisting the temptation and maybe, just maybe, she will give up after a while. Oh who am I trying to fool, there is no quit in her. I was a little worried about how she and Emmi would get along but it seems that she is so preoccupied with sticks that she hasn’t even noticed Emmi yet.

Today was the nicest day so far, I think the temps got up into the 70’s by early afternoon and stayed there right till after sundown. We had a little cloud cover drifting around today though and that made for a better sunset than we have seen since we got out here. 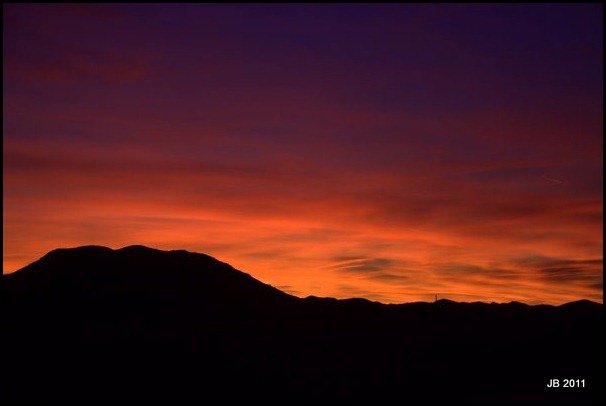